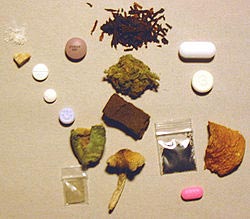 Miracle deliverance PSYCHOACTIVE DRUGS - SUPERNATUAL BEINGS DELIVERANCE
Nightmare Land
FroM his word! Pat holliday, Ph.d.
Deliverance from the Stolen Mind and
Satan's Captivity
By Pastor Pat Holliday on February 9, 2010 Psychoactive drugs
An assortment of psychoactive drugs Psychotropic Drugs psychoactive drug, psychopharmaceutical or psychotropic is a
that acts primarily upon thewhere it altersfunction, resulting in changes in and These drugs may be usedto purposefully alter one's

asfor ritual or spiritual purposes, as a tool for studying or augmenting the mind, or therapeutically as1 Renewal of the Mind The devil's battlefield is your mind. You either control and protect your mind, or the devil controls a part or all your
mind. Do you know that the Scriptures
say that you have the power to keep
the devil out? (2 Cor. 5:17),
"Therefore if any man be in Christ, he
is a new creature: old things are
passed away; behold, all things are
become new. "
My concern as a deliverance minister is that when Christian people need deliverance oppression and powerful demonic powers, many pastors simply turn to the psychiatry seeking healing when the oppression can actually be demonic possession. In Galatians 5:20, Revelation 9:21 and Psychotropic drugs cause
18:23. The Greek Word Harmakeia is spiritual blindness,
where we get "pharmacy" and its blocking all God
derivatives. In Galatians 5:20, it is translated "witchcraft" (KJV) and the occurrences in the book of Revelation are accurately translated "sorceries." The Aramaic word harsuta – an extended form of the noun harse, is consistently translated as "sorcery," supporting the translation of pharmakeia into the same word. From Wikipedia, the free encyclopedia Sorcery is defined as "the use of supernatural power over others through the assistance of evil spirits."2 The use of psychotropic drugs (antidepressants) opens the doors for demons to infiltrate the human mind by unlocking chemical portals that takeover their thoughts. Sorcery demons come in and manipulate the patient's emotions and cause spiritual blindness, blocking all God consciousness. Because these psychotropic drugs are being prescribed by physicians, (antidepressants) are New Age solutions of sorcery that is widely accepted as solutions by secular society and Christian Churches. Most people trust their doctors and cannot believe they would hurt them. Many doctors prescribe the harmful drugs believing they are helping to relieve their pain. However, the truth is, both patient and doctor are being misled by mega pharmaceutical companies that truly know exactly the great damage that they are doing to human minds. They know the great destructive mind controlling chemicals that they have manufactured. What people do not know can certainly hurt them. Misinformation and
ignorance has led many to unwittingly surrender themselves to the effects of
these drugs, which in numerous cases has resulted in demonic rule over their
emotions and thought patterns.
In countless instances, Christians are prescribed mind controlling drugs. Regrettably, millions are like walking dead zombies finding themselves ensnared in a chemical prison that they cannot escape. We find very few ministries able to help with this massive problem. This minister has seen people from all walks of life, including some pastors that bought the lie that all they needed to do is take a little pill and it would all just go away. It is a lie and has become the greatest nightmare that you can ever imagine. There is no escapism from the power of sin. It must be dealt with in a spiritual manner in order to erase its power from your soul. Early on, before these powerful drugs were created, people felt the powers of guilt and spiritual dealt with the problem through repentance and receiving Jesus. They were able to restore their souls through the inspiration and renewal of their souls by the Word of God. Now they dull their spirit, mind and body using drugs. It is not the answer but the beginning of a terrorizing life of demonic hellish torment. The American Heritage Dictionary,