Iran J Radiol. 2014 May; 11(2): e16327. Published online 2014 May 15. The Role of Choice-Lock Catheter and Trocar Technique in Percutaneous Ablation of Symptomatic Renal Cysts Burak Ozkan 1,*; Ali Harman 1; Baris Emiroglu 1; Ilker Arer 1; Cuneyt Aytekin 11Department of Interventional Radiology, School of Medicine, Baskent University, Besevler, Turkey*Corresponding author: Burak Ozkan, Department of Interventional Radiology, School of Medicine, Baskent University, Besevler, Turkey. Tel: +90-5056384753, Fax: +90-3124820575, Received: August 3, 2013; Revised: December 13, 2013; Accepted: February 9, 2014
Background: The most common benign lesions of the kidney are simple cysts. They are acquired lesions and mostly affect the elderly
Objectives: To describe the usage of choice-lock catheter and trocar technique in percutaneous renal cyst treatment and determining
long-term outcomes.
Patients and Methods: This retrospective study was carried out between February 2000 and July 2011. Eighty-eight cysts all of which were
Bosniak type-1 cysts were selected in 75 patients. The treatment indications were flank pain, hydronephrosis and hypertension. The choice- lock catheter was used for 84 cysts with the trocar technique. Ninety-five percent ethanol was used as the sclerosing agent. Maximum volume of the injected ethanol was 175 ml. The mean follow-up time after the treatment procedure was 23 months. Sixty-four cysts were located in the cortical and 24 cysts were located at the parapelvic region.
Results: Fifty-seven cysts had complete regression, while 31 cysts regressed partially. After the procedure, pain was relieved in 44 (82%)
patients and the pain alleviated in four (8%). Normotension was obtained in five (62.5%) of the eight hypertensive patients and no hydronephrosis was detected in nine patients. There were no relationship between the localization and the regression rate. No major Conclusions: Percutaneous ethanol sclerotheraphy in simple cysts is a safe, cost-effective and minimally invasive method. We consider
that this technique may be an alternative solution in the percutaneous cyst treatment.
Keywords: Simple Renal Cysts; Percutaneous Cyst Ablation; Ethanol Sclerotherapy; Choice-Lock Catheter; Trocar Technique catheters are over 6 French sized. Choice-lock catheter con- The most common benign lesions of the kidney are the sists of three co-axial parts. The stillet, the most inner part simple cysts. They are acquired lesions that mostly affect of the catheter can also be used for the initial puncture the elderly population (1). The incidence of the simple site. This catheter has a special lockage system that enables renal cyst is more than 50% at age of 50 years. The renal the catheter stability of the trocar during the puncture cysts occur by weakening of the epithelium of the collect- with one hand usage. There is a metal cannula for support- ing duct cells leading to the diverticula formation pro- ive aim between the pigtail plastic catheter and the stillet. cess by time (2). The indication for treatment is based on The supportive metallic part of the catheter is located in urinary tract obstruction. Several methods for treatment the catheter, it stables the other parts to be guided. This of the cyst including surgical and percutaneous proce- option enables the catheter to be guided safely through- dures have been proposed; namely, percutaneous mar- out the hardened tissues. At the most outer part, there is supialization (3), percutaneous aspiration (4), and open a hydrophilic covered plastic part that has a pigtail lock- and laparoscopic cyst unroofing (5). Aspiration alone age system (Figure 1). The catheter can be used instead by without injection of a sclerosing agent has been reported the Seldinger technique with the help of 0.018 inch guide with a higher recurrence rate. There are several promis- ing results with single or multi-session sclerotherapy with percutaneous drainage (6, 7).
The advantage of choice-lock catheter is the 5.7 F diam- The aim of this study was to assess the role of choice- eter. The diameter of the choice-lock catheter is smaller lock catheter and trocar technique in percutaneous renal than other draining catheters. Moreover, other draining cyst treatment.
Implication for health policy/practice/research/medical education:
This paper gives rise to the minimally invasive treatment options in Bosniak cyst treatment.
Copyright 2014, Tehran University of Medical Sciences and Iranian Society of Radiology; Published by Kowsar Corp. This is an open-access article distributed under the terms of the Creative Commons Attribution License, which permits unrestricted use, distribution, and reproduction in any medium, provided the original work is properly cited. 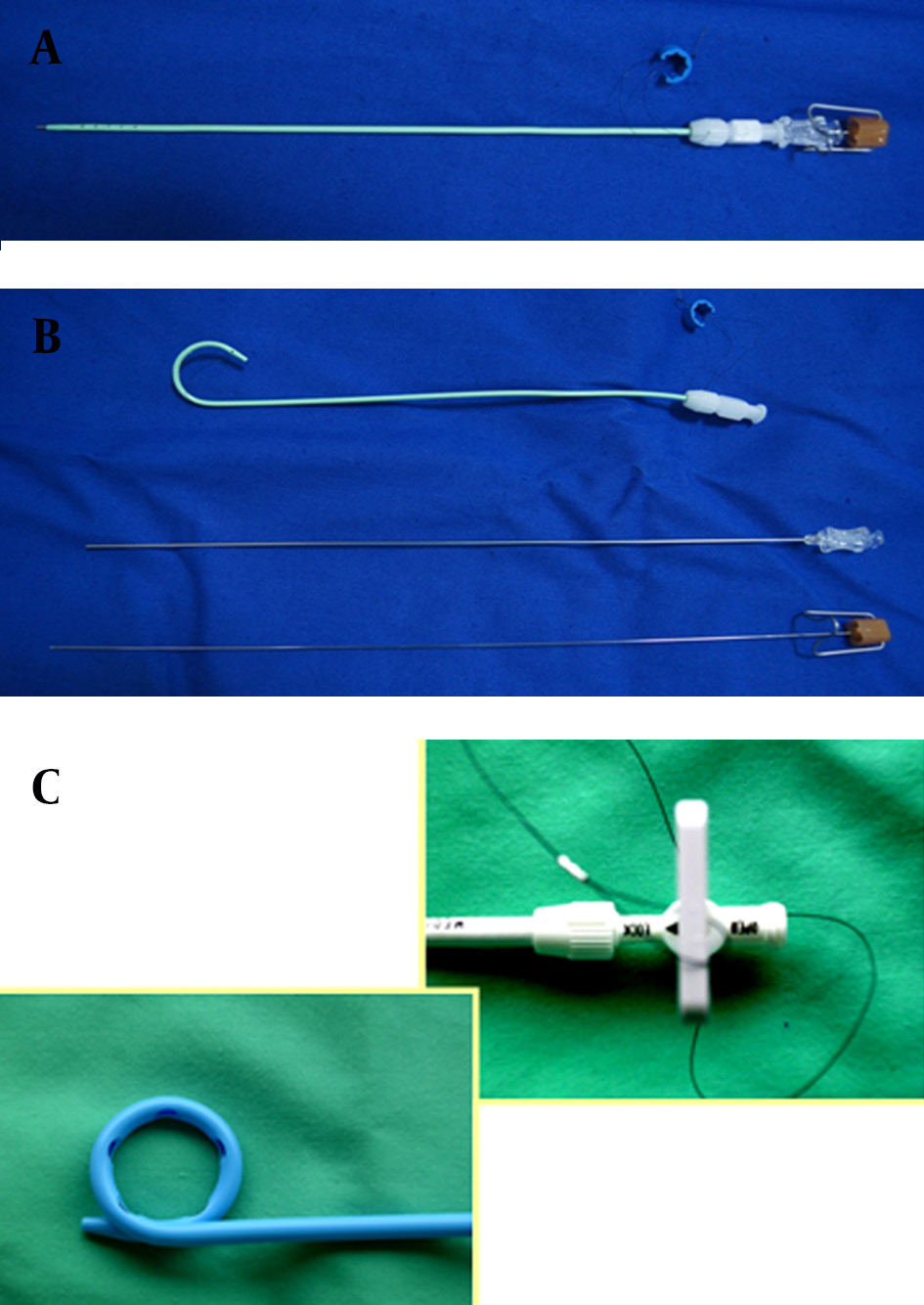 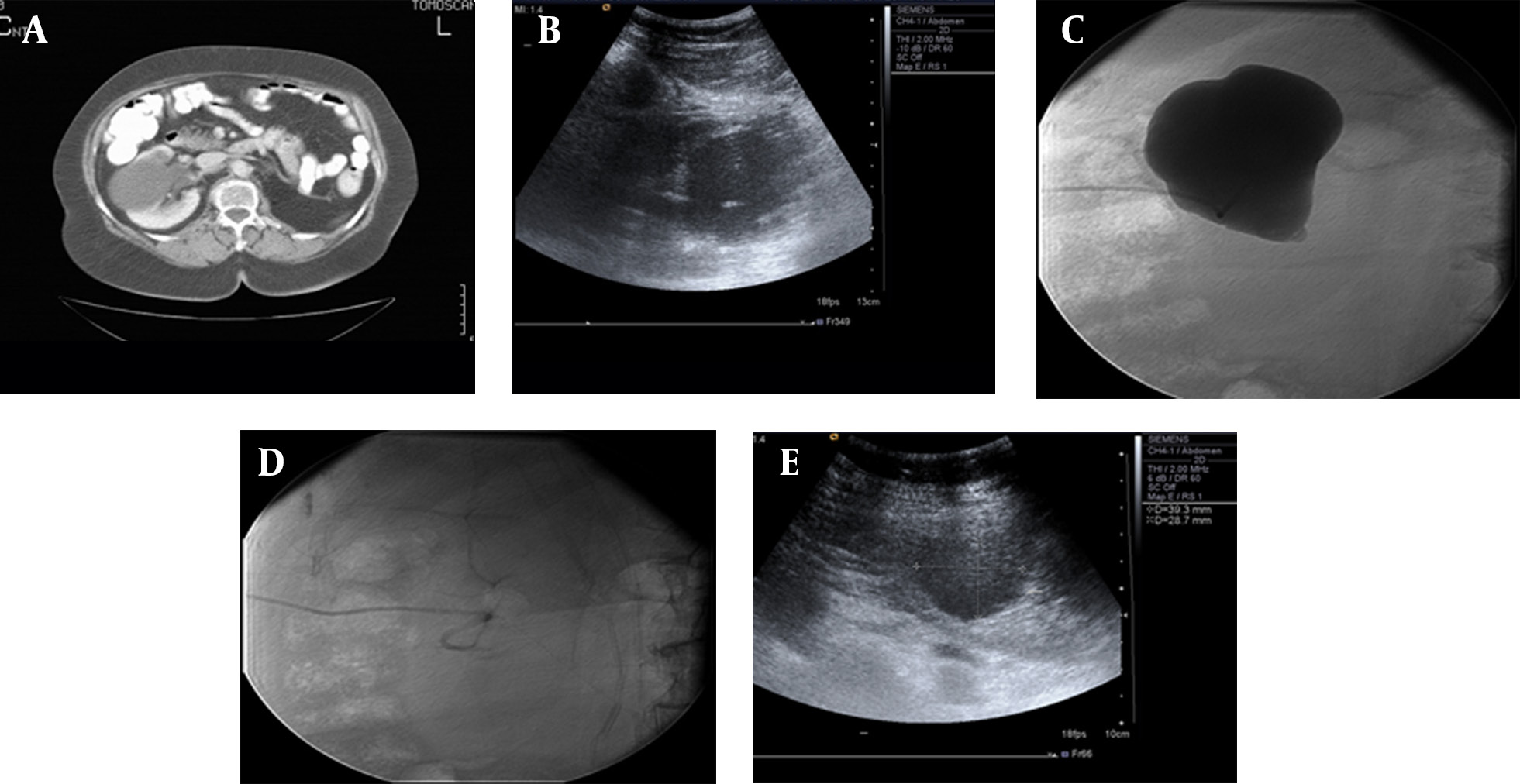