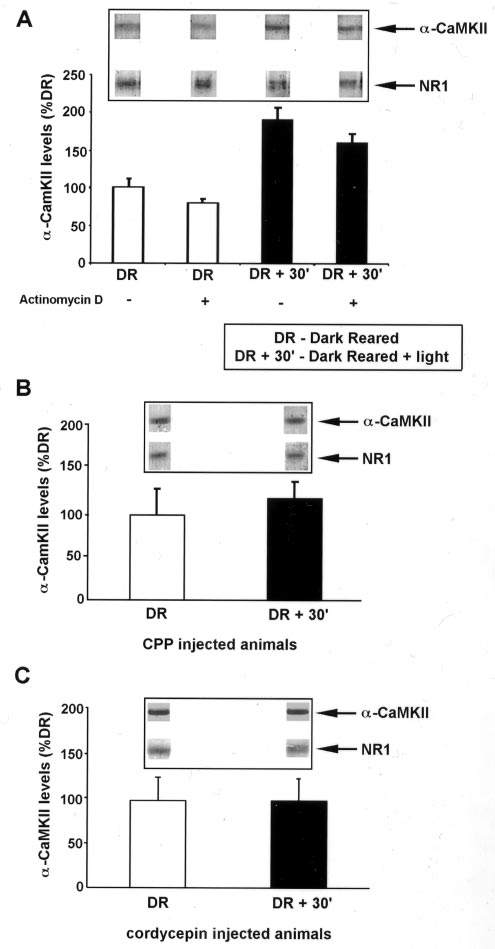 Wells et al. • NMDAR-Mediated Regulation of mRNA Translation in Neurons J. Neurosci., December 15, 2001, 21(24):9541–9548 9543
1998). This polyadenylation is accompanied by an increase in ␣-CaMKII protein in the synaptic fraction isolated from the visual cortex (Fig. 1A) (Wu et al., 1998). In contrast, the level of NR1 (NMDA receptor subunit-1) protein in the same fractions remains unchanged after light exposure. This elevation in ␣-CaMKII protein is sensitive to the protein synthesis inhibitor cycloheximide (Wu et al., 1998). The increased production of ␣-CaMKII protein could be attributable to newly synthesized message or to the enhanced translation of existing mRNA. To distinguish between these possibilities, rats were injected with the transcription inhibitor actinomycin D before light exposure. As shown in Figure 1, this treatment failed to block the increase in ␣-CaMKII protein in the synaptoneurosome fraction of dark- reared, light-exposed animals. Therefore, the activation or en- hancement of mRNA translation is required for the visual experience-induced increase in synaptic ␣-CaMKII.
The activation of NMDARs is thought to drive experience- induced synaptic plasticity during postnatal development of the visual cortex (Bear et al., 1990; Daw et al., 1999). To examine whether NMDAR activation triggers this new protein synthesis, rats were injected with the NMDAR antagonist 3-(2 carboxypiperazin-4yl) propyl-1-phosphonic acid (CPP) just be- fore visual experience. As shown in Figure 1B, NMDAR block- ade of dark-reared, light-exposed rats inhibited the increase in ␣-CaMKII protein in synaptic fractions. Thus, NMDAR activa- tion is essential for experience-induced translation of ␣-CaMKII mRNA in the visual cortex.
As one test of whether mRNA polyadenylation is required for this new ␣-CaMKII protein synthesis in the visual cortex, we injected the dark-reared animals with 3⬘-deoxyadenosine (cordycepin), an adenosine analog that inhibits mRNA polyade- nylation (Beach and Ross, 1978; Ulibarri and Yahr, 1987; McGrew et al., 1989; Groisman et al., 2000). Cordycepin treat- ment blocked the light-induced increase in ␣-CaMKII protein in the synaptic fraction of visual cortex (Fig. 1C). This finding suggests that visual experience-induced NMDAR activation trig- gers ␣-CaMKII protein synthesis via a mechanism that requires A role for cytoplasmic polyadenylation elements in
activity-dependent mRNA translation in neurons
To elucidate the mechanistic basis of this process in more detail,
we next developed a cell culture model to directly assess the role Figure 1. Experience-induced increase in ␣-CaMKII protein in the visual of the ␣-CaMKII CPEs in translational regulation. We based this cortex mediated by NMDAR activation and mRNA polyadenylation. A, assay on the well defined low-density hippocampal neuron culture Quantification of ␣-CaMKII levels in synaptoneurosome (SN) fractions system (Bartlett and Banker, 1984; Fletcher et al., 1991, 1994; isolated from the visual cortex of animals reared in complete darkness (DR) Goslin and Banker, 1991). These cultures are comprised of ⬃99% and animals reared in the dark and exposed to light for 30 min (DR ⫹ 30⬘).
Western blots for ␣-CaMKII and NMDAR subunit NR1 were performed neurons and ⬃1% glial cells. In all of our experiments, we scored from PAGE loaded with equal total protein of SN samples isolated from only neurons, which were identified based on morphology using DR and DR ⫹ 30⬘ visual cortex. Quantitative densitometry was performed phase contrast microscopy and/or fluorescence imaging of GFP- on the ␣-CaMKII bands, and these were normalized to the level of NR1 in transfected cells. Control experiments with anti-microtubule- the same lane [the amount of NR1 subunit in SN fraction does not change associated protein 2, synaptic markers, and anti-GFAP confirmed with visual experience (Quinlan et al., 1999)]. Where indicated, actinomy- cin D (1 mg/kg) was injected (intraperitoneally) 30 min before light the reliability of these identification methods (data not shown).
exposure. This dose of actinomycin D is effective in blocking protein Neurons cultured for 7–10 d were transfected with plasmids synthesis in the brain (Jackson, 1972; Pickering and Fink, 1976). Each containing the GFP coding sequence linked to a fragment of the experiment consisted of two to four rats per treatment group, and results ␣-CaMKII 3⬘-UTR that harbored either intact or mutated CPEs shown are the mean ⫾ SEM of three experiments. Insets show represen- tative bands from one experiment. B, Quantification of ␣-CaMKII expres- (GFP-CPEWT and GFP-CPEMUT, respectively) (Fig. 2). We sion as in A, in animals injected with the NMDAR antagonist CPP (10 then monitored the expression of the GFP-encoding mRNA and mg/kg) 30 min before light exposure. Each experiment consisted of two to GFP protein in the transfected neurons by ISH and GFP fluores- four rats per treatment group, and results shown are the mean ⫾ SEM of three experiments. C, Quantification of ␣-CaMKII performed as in A, in To enable reliable quantification, we established conditions in animals injected with cordycepin (6 mg/kg) 30 min before light exposure.
Each experiment consisted of two to four rats per treatment group, and which ⬃10% of the neurons (⬃200 per coverslip) were trans- results shown are the mean ⫾ SEM of three experiments. 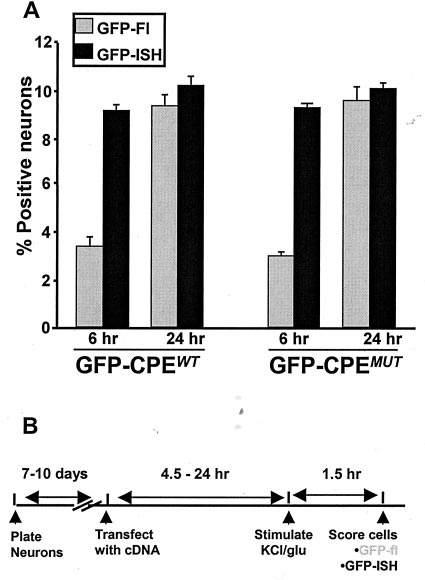 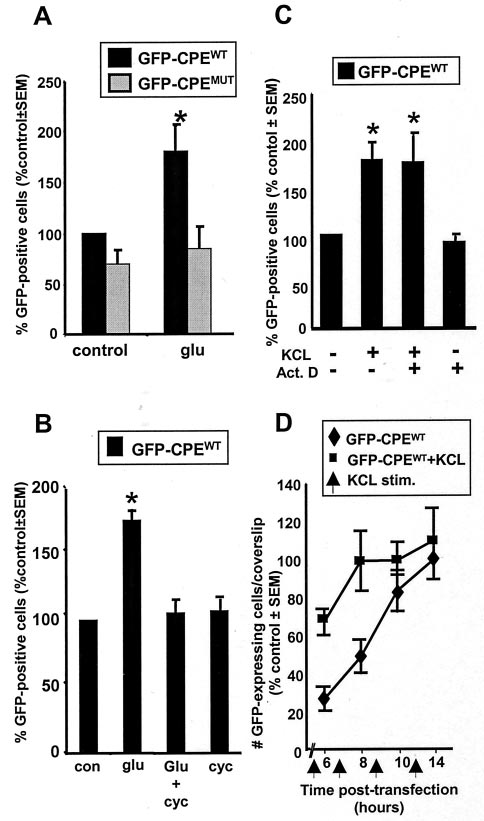