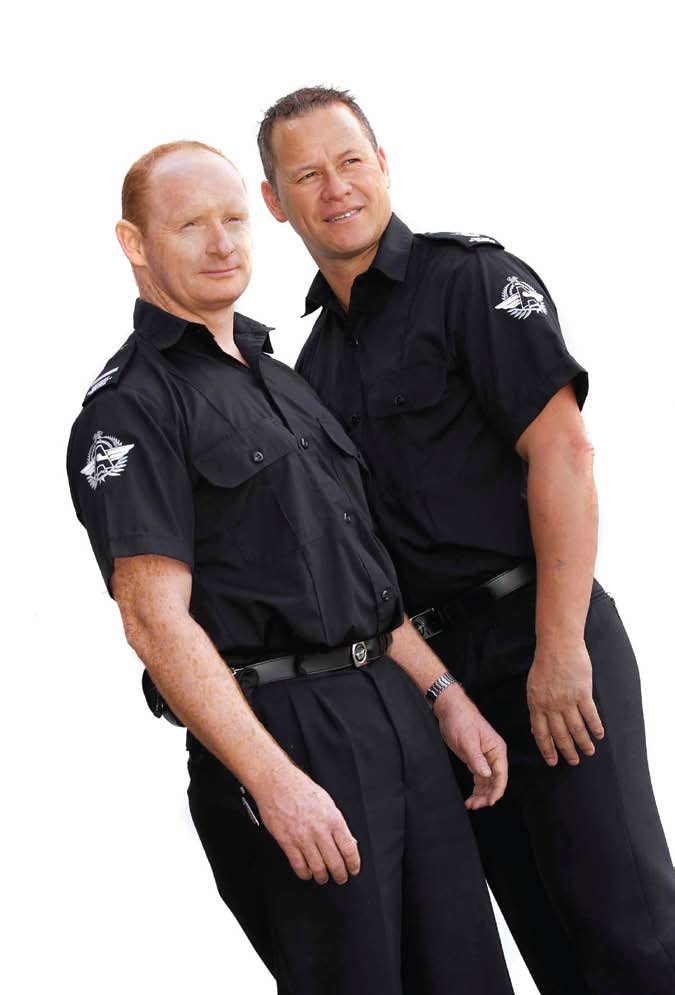 Cover: Brian Chase (left) and Tony Beattie (right) of the Airport Emergency Service team model the new jet black uniform special y designed Right: (from left to right) Vern Eruera, Dave Smyth, Gavin New international arrivals
Gibson stand tal in This month sees the opening of their new kit.
our new arrivals area in the international terminal. It features strong kiwi images and incorporating the décor for arriving passengers, as new airport identity.
wel as spectacular elevated views across the Manukau Harbour. A 1,600m2 arrivals duty free store will be open, and the immigration processing areas have been expanded and improved to enhance the arrival experience. More details can be found in the project profile inserted into this month's edition of the Airport Times.
The A380 is coming
new corporate brand. It was perfect Recently Emirates announced that New look timing to launch both images at around its A380 aircraft will fly daily to and
the same time. We are very happy with from Auckland via Sydney to Dubai from 1 February 2009. Auckland for airport
Airport is wel and truly ready for its The new emblem on the uniform (see arrival. The upgrade and widening emergency image on left), which was designed of the main runway was completed
in conjunction with AES staff and the in 2006 as well as hard stands for company, reflects four key elements: parking aircraft at the new pier, The Auckland Airport ‘A', wings, fire Pier B. A380-capable Pier B will be Tall, well-dressed men strutting their helmet and axes, and the silver fern. operational from October this year. stuff – no it's not the catwalks of Paris, The bold ‘A' in the centre of the It connects to the new expanded but Auckland Airport's newly kitted-out emblem is the new logo of Auckland arrivals area and wil provide two Airport Emergency Service (AES) team. Airport that was launched late last contact gates, each with two The AES team can now be spotted year. The wings reflect aviation and airbridges for two-door handling around the airport sporting an all- swiftness of response, while the of large aircraft.
new jet black uniform complete with outstretched wingspan represents Representing our country
a special y designed emblem which the wide range of roles carried out During April we continue to roll reflects Auckland Airport's brand by AES. The fire helmet and axes are out our vision to ‘represent our an internationally recognised symbol country as New Zealand's Airport'. of firefighters. The silver fern reflects AES manager Mike Gibson says the In delivering our vision, we are Auckland Airport's core value of new uniforms also coincide with a committed to being outstanding, representing New Zealand and being departmental name change from uniquely kiwi and welcoming. uniquely kiwi.
Response Unit to Airport Emergency Elements of the new brand are Service, designed to reflect the variety The new uniforms, which are supplied reflected in the Airport Emergency and scope of the team's role. by the same company that supplies Service team's smart new black the New Zealand Fire Service, are uniform and white emblem. A fresh "The new name is a much better already receiving the thumbs up from new look wil be seen throughout indication of the huge range of staff. AES officer Vern Eruera says, our 2008 interim report, company incidents the team responds to. We "Our new uniforms are made from a stationery, the Airport Times and can be called to many emergencies at really good quality material and I think a number of other visual elements the airport including aircraft incidents, the emblem is smart." His colleague within our company.
medicals, motor vehicle accidents, Ian Gibson adds, "It's clean, tidy, smart fires, security issues and fuel spills.
and the colour is practical." "It's clean, tidy, The change of name and uniform is just smart and the colour the first part of the facelift for the Airport Emergency Service. Within the next few months all emergency vehicles will be "With the uniform it was definitely time adorned with the new Auckland Airport for a new image as the old uniforms logo and the fire station wil freshen were becoming difficult to source and up with new signage, including the Chief executive officer colour consistency was hard. As we replacement of the neon sign on the started thinking about a new image, roof of the station. the company also started to look at a 02 Airport Times 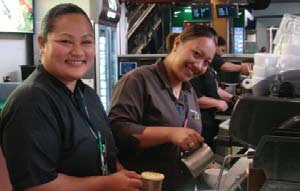 The two ladies are well known amongst the airport community Left: Tala Schmidt (left) and Jasmine and are renowned for their outstanding service, happy Kereta-Tavita (right) dispositions and the ability to remember whether your trim cappuccino has one lump or two.
HMSC-AIAL Ltd nine years ago and are Café Espresso is owned by HMSC-AIAL Ltd, a joint venture such good friends company between Auckland Airport and HMSHost. General they often socialise Manager Anne Singe refers to Tala and Jasmine as Café together outside Espresso "divas" who are "adored by staf and travel ers who appreciate their attention to detail and caring natures.""Tala and Jasmine work so wel as a team that staf gravitate to Café Espresso to get their daily coffee hit. We receive positive comments from the public through the airport's comments cards referring to the thoughtful and efficient service from the girls," she says.
With a combined 20 years' working at the airport, Tala and Tala and Jasmine Jasmine know the way around a coffee machine. "We have
a special bond," says Jasmine. "I don't quite know why, but we make a great team. We feed off each other and intuitively know how each other works." Famous New Zealand ‘couples' over the years have included Chez and Dale from Chesdale commercials, Wal and Dog Tala adds, "Working with Jasmine is like working with my from Footrot Flats, Manu and Big Ted from Playschool, Rod sister. When she is away on holiday it isn't the same around Stewart and Rachel Hunter… and now Tala and Jasmine from here. We really do work better as a team." Auckland Airport staff member Stephanie Brewer is a regular visitor to Café Espresso. "I get my trim flat white off Tala and While they may not be a celebrity pairing, to staff in the Jasmine every day. Often by the time I get to the counter, the international terminal Tala Schmidt and Jasmine Kereta- coffee has been made and is waiting for me. They really do Tavita from Café Espresso are better than a home-cooked offer exceptional service," she says.
Left: Lisa Fred (left) and Maea Wihongi Marae sleepover
(right) stayed in the marae on the first Cast your mind back to your childhood and your first night night of their school away from home… was it in a marae? For some of the trip. The girls said Year 5 and 6 children at Jean Batten Primary School, it some of the younger children thought the carvings were a bit Almost 130 children from the local school recently stayed at scary in the dark, the airport marae, Te Manukanuka o Hoturoa, as part of their but they thought school trip. Over two days, two classes visited the marae, received a powhiri, learnt about the history of the marae, and a great way to get to know their discussed the carvings and tried their hand at flax weaving. classmates better. The biannual school trip also included activities such as abseiling, designed to build confidence and encourage team building. The airport marae comfortably sleeps 50 adults and the dining room caters for 80 seated meals. The beautifully carved marae is an ideal conference venue, gathering place or site for an overnight stay. For more information, contact Shareholders vote CPPIB's partial takeover offer for Auckland Airport was approved
by a majority of the company's shareholders who voted.
for takeover
The transaction requires final approval from the Overseas Investment Office by 11 April 2008 in order to become unconditional. If approval is not gained by this date, the Last month Auckland Airport shareholders voted to approve the offer will lapse and the shares offered for sale will no longer Canada Pension Plan Investment Board's (CPPIB) partial bid. be subject to the bid, which means they will be free to be traded as usual.
Staff parking
al ow for upcoming international terminal forecourt developments. Alternative staf parking can be found in the public car park (P4) temporary staff parking area or staff car park 7 (S7). Parking space in staff car park 4 (S4) was reallocated at the end of last month resulting in the loss of Should you witness any parking misdemeanours, 85 staff parking spaces. The Koru, executive and please email [email protected] If you have any leased parking, which was previously located near questions or comments, please use this email address the forecourt, has been relocated to this car park to or ring 0800 AIRPORT. Airport Times 03 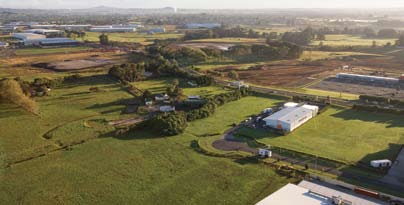 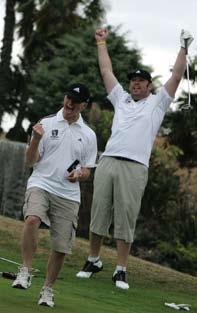