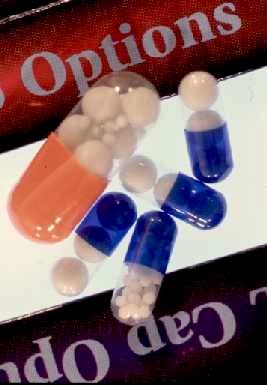 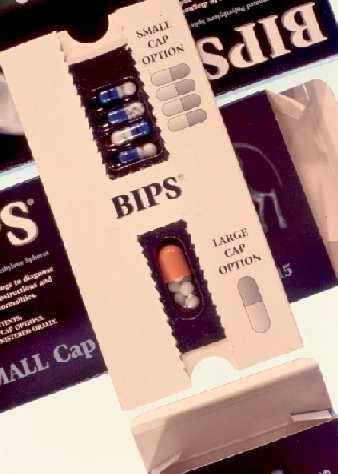 Key point
What are BIPS?
BIPS are an innovative contrast agent for the diagnosis of GI obstructions and motility disorders v What are BIPS?
Barium Impregnated Polyethylene Spheres (BIPS) are a mixture of plastic and barium sulfate. Mixed as powders, the combination is subjected to sufficient heat to render the plastic fluid and this is injection moulded into precision dies which yield solid, non- dissolving spheres of two sizes (5 mm and 1.5 mm) containing inexorably bound barium sulfate. BIPS employ the same barium (barium sulfate) that is in the liquid suspensions used in conventional contrast studies. v What are BIPS "Options"?
BIPS are available in two capsule sizes (or "options"). The large capsule option consists of a large gelatine capsule containing 1 dose of BIPS (ie. ten 5.0 mm and thirty 1.5 mm BIPS). The small capsule option consists of four small gelatine capsules collectively containing 1 dose of BIPS. The small capsules are easier to administer to cats and small dogs. The large capsule is more convenient to administer to large dogs. 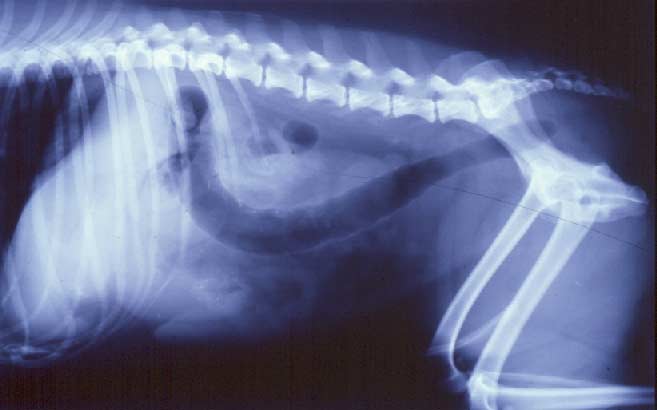 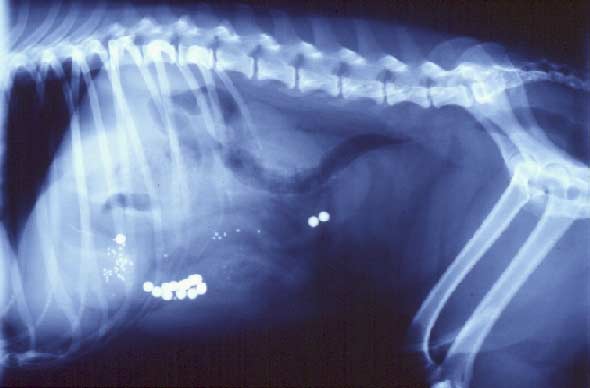 Key point
One of the most stressful decisions
a veterinarian faces is ruling out an obstruction. BIPS greatly help this What are the indications for performing a BIPS study?
The indications for BIPS studies are frequent in small animal practice. BIPS are an accurate and convenient way to rule out physical obstructions of the bowel and are the only practical way for veterinarians in private practice to assess gastrointestinal motility and the transit of food. The principal indications for BIPS studies include: v ruling out obstructions of the GI tract in dogs and cats with acute-subacute vomiting v ruling out linear foreign bodies in cats v screening patients with chronic vomiting or diarrhea for partial obstructions of the bowel (eg. from neoplasia) and for motility disorders v investigating dogs with chronic or recurrent bloating for delayed gastric emptying v investigating cats and dogs with inexplicable anorexia for "low" partial obstructions v investigating cause and prognosis of animals with recurrent idiopathic constipation Spot the obstruction in this vomiting Legend:
There it is! The majority of the
large BIPS have accumulated
orad of an obstruction in the
duodenum. See Case 2 for more
details.
What are the contraindications and limitations of BIPS?
v The patient with shock or peracute signs is not a candidate for a BIPS study. Urgency will demand immediate treatment, be this surgical or medical. v BIPS are not indicated in patients too weak to swallow or in those with "coffee ground" vomitus or melena. v BIPS are of little value in animals which vomit so frequently that the BIPS are not retained long enough for gastric emptying to begin. In general, BIPS studies can be successfully performed on patients that are vomiting less than 4 times per day. v BIPS are not indicated for the detection of non-obstructive gastric or intestinal diseases (e.g. ulcers, inflammatory bowel disease) although they often show motility abnormalities secondary to such diseases. Key Point
BIPS have a number of important advantages over liquid barium but don't replace this technique v How do BIPS compare with other diagnostic methods?
BIPS do not replace any currently available diagnostic modalities. Rather, they are a valuable alternative approach. The BIPS are of more value to private practitioners than clinicians working in well-equipped referral institutions because the diagnostic spectrum of ultrasound and scintigraphy overlap somewhat with that of BIPS. See specific comparisons below: v How do BIPS compare with the use of barium sulfate suspensions?
Compared to barium sulfate solutions, BIPS offer the following advantages: - they increase the likelihood of detection of obstructions by those who experience difficulty interpreting barium-follow-through studies (see below) - they are more sensitive for the detection of motility disorders because they provide quantitative information on gastric emptying and intestinal transit times and they mimic the transit of food not liquid (the transit of liquid is rarely disrupted by motility disorders as much as the transit of food - their administration is more convenient; no stomach tubing is required and radiographs do not need to be made at set intervals 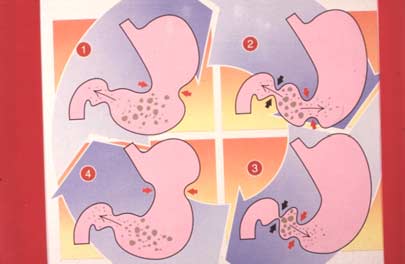 - they are less likely to be aspirated and are less likely to cause peritonitis if the bowel is perforated - they do not obscure abdominal detail on the radiographs reducing the need for survey films prior to the contrast procedure Legend:
The gastric emptying of solids is more
complex than that of liquids. It requires
antral grinding to reduce particle size
and intimate coordination between
antral, pyloric and duodenal
contractions.
Compared to barium sulfate, BIPS have the following disadvantages: - they do not provide as much information about mucosal detail as can be obtained by a single or double contrast gastrogram - they do not outline the luminal borders of the GI tract and so are less valuable for differentiating dilated or displaced organs (eg megaesophagus or GDV) - studies can take longer as the BIPS move somewhat more slowly through the GI tract than liquid Key point
If large BIPS enter the colon it is
highly unlikely the patient has a gastrointestinal obstruction v Why are GI obstructions easier to rule out with BIPS than liquid barium?
Gastrointestinal obstructions are rarely complete. In the small intestine, clinical signs
usually begin once the bowel lumen has been reduced to a diameter of approximately 5 mm. This is the diameter of the large BIPS. These settle in the stagnant loop in front of the obstruction unlike liquid barium which can pass through. Thus, if large BIPS enter the colon it is highly unlikely the patient has a gastrointestinal obstruction. In contrast, if barium liquid enters the colon, an obstruction is still entirely possible. The accuracy of 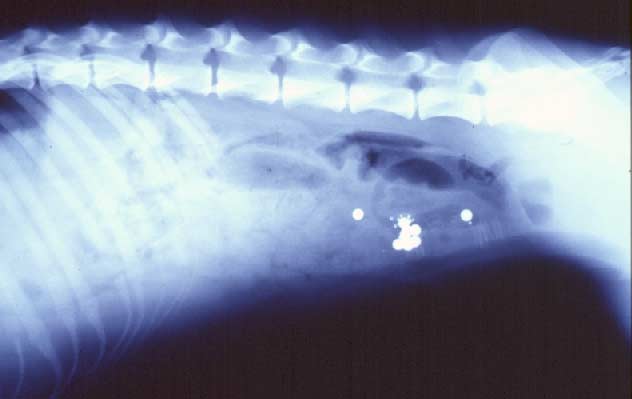 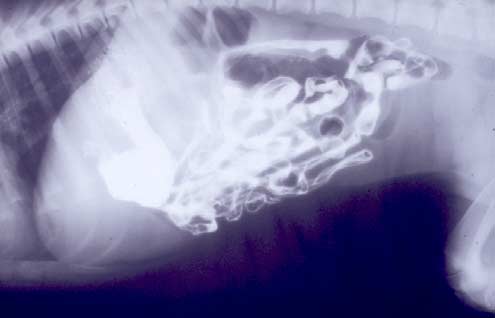 radiopaque markers for the diagnosis of partial obstructions has recently been found to be equivalent to CT scans in humans (see abstracts). Lateral abdominal radiograph clearly showing bunching of BIPS orad of a partial obstruction of the small intestine. Legend:
The typical barium follow-through
examination presents veterinarians
with the dilemma of whether
narrowings of the barium column
are due to peristalsis or obstruction.
In contrast, BIPS do not usually
pass an obstructed bowel segment
more clearly identifying the
presence of the obstruction.
v Can BIPS be used with liquid barium?
Liquid barium can be used after a BIPS study but BIPS cannot be used for 24-48 hours
after a liquid barium study. Liquid barium is most often used after a BIPS study if the BIPS demonstrate delayed gastric emptying but do not reveal the cause. In this situation, the liquid barium is usually used in the absence of endoscopy and in the hope of detecting gastric abnormalities such as ulcers. Key Point
Primary & secondary disorders of GI motility are collectively common. BIPS provide the only convenient and accurate way to diagnose such v How do BIPS compare with the use of ultrasound? disorders.
In contrast to ultrasound, a BIPS study provides more functional information on gastric emptying rate and intestinal transit time but less morphologic information about the v How do BIPS compare with endoscopy?
BIPS complement the diagnostic spectrum of endoscopy because they allow diagnosis of
motility disorders and obstructive diseases of the lower small bowel (such as annular adenocarcinoma), neither of which can be diagnosed by current endoscopic techniques. v How do BIPS compare with scintigraphy?
In contrast to scintigraphy, BIPS offer a more practical method of quantifying emptying and transit. However, scintigraphy allows greater accuracy and the potential to assess the passage of specifically tagged nutrients. Key point
Common questions about the administration of BIPS Perform BIPS studies on an empty
stomach in acute GI presentations and with Hills d/d, i/d or r/d for diagnosis of chronic GI problems v What is the recommended dose for BIPS in dogs and cats?
Thirty small BIPS and 10 large BIPS.
v Can I give less BIPS than the recommended dose?
It is highly recommended to give the entire diagnostic set of 30 small and 10 large BIPS when patient compliance allows. The fewer BIPS used, the harder it is to interpret the studies and the greater likelihood of errors. It is difficult to accurately determine gastric emptying and orocolic transit percentages when fewer than the recommended number of BIPS are used. It is also more difficult to ascertain where the BIPS are in the bowel and whether they have bunched. v When do I give BIPS with food and when do I give them on an empty stomach?
In acute GI presentations, BIPS are usually given on an empty stomach. This is done because patients are usually anorexic when suffering from acute diseases. Furthermore, in acute vomiting, clinicians tend to be more concerned with ruling out gastrointestinal obstructions than with assessing the transit of food. BIPS given on an empty stomach move more quickly through the gastrointestinal tract than when given with food. This time saving can be helpful when diagnosing animals suspected of obstructions. v When do I give BIPS with Hills Prescription diets d/d or i/d?
BIPS are usually given with d/d or i/d during the work-up of chronic vomiting or small bowel-type diarrhea. The study is performed with food because in animals with chronic gastrointestinal complaints, clinicians are often interested in ruling out both obstructions and motility disorders. The transit of food (as measured by the transit of BIPS) is a clinically relevant method of quantifying gastrointestinal motility. 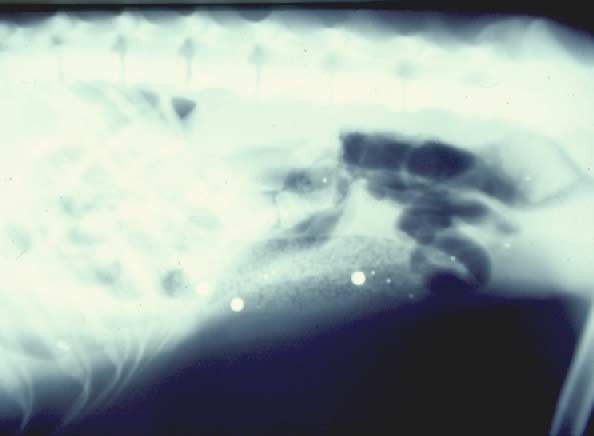