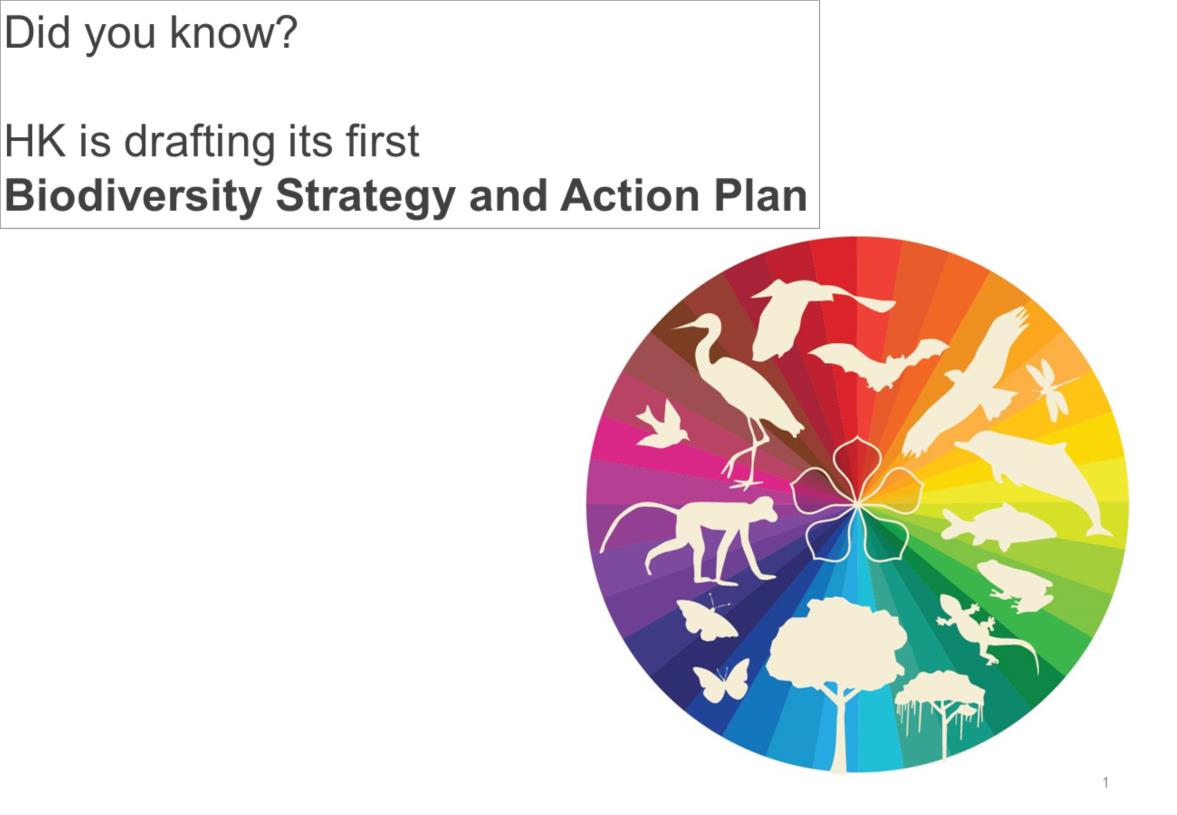 Slide 1 – Did you know? HK is drafting its first Biodiversity Strategy and Action Plan.
We don't want to scare you about the environment, because we all know that we can do a lot better.
So we want to share some good news about something amazing that is happening in HK, and how itapplies to you.
HK is putting together its first Biodiversity Strategy and Action Plan (BSAP). This is HK's plan forurgent and effective action to stop biodiversity loss by 2020.
It is led by the Agricultural Fisheries and Conservation Department (AFCD) working with theEnvironment Bureau, and because it is a participatory process, all other government departments,NGOs, universities, business and society are being involved in drafting it too. Even you can getinvolved.
The BSAP will be finished and ready to be rolled out in 2015. We think it is very exciting because it isthe start of our city thinking positively about how we want to connect with nature.
(1) Studies have shown that communicating a positive environmental vision which emphasisessolutions helps to promote sustainable behaviour, and we think HK's BSAP is a great topic to apply this approach. See (2) AFCD's BSAP webpages provide details on how the consultation is being structured, plus upcoming public events about the BSAP eg lectures and roadshows. See . (3) BSAP SC Paper 01/2013 provides a good background to HK's BSAP. See (4) The CBD was extended to HK in 2011. HK has no obligation to do a city-wide BSAP but has committed to this goal, as confirmed in the Chief Executive's Policy Address 2013. See . Slide 2 – It's time to ask a big question. What is nature worth?
Why do a HK biodiversity plan now? After all HK itself is not a signatory of the CBD. And Macau is notdoing a BSAP. Governments, NGOs, the United Nations, businesses, are all realising that protectingbiodiversity is a real economic issue. This new approach tries to place an economic value the benefitsof nature, being the "ecosystem services" provided by biodiversity.
It is not easy to value biodiversity and ecosystem services. But the problem is that if somethingcomes for free, and we do not calculate its true worth, we assume it has zero value and then destroyit.
When we know the value of biodiversity, we can make more informed land-use decisions.
Everyone in HK can understand these trade-offs, and take part in these decisions. That includes youand me! (1) The Economics of Ecosystems and Biodiversity (TEEB) is an international initiative under the United Nations Environment Programme (UNEP) started in 2007 to highlight the economic benefits of biodiversity. See . (2) The Natural Capital Project is another initiative working on valuing biodiversity, formed by WWF, the Nature Conservancy, Stanford University and the University of Minnesota, because: "[p]eople are making conservation and development decisions separately, and therefore are not incorporating environmental benefits into those decisions. Without properly accounting for these benefits, we risk losing them. Accounting for ecosystem services reveals the diverse benefits provided by natural systems, clarifies tradeoffs between alternative development scenarios, and helps people and institutions make more informed decisions about how to use lands and waters." See (3) Timing is also important. According to the UN's Third Global Biodiversity Outlook, 2010: "The action taken over the next two decades will determine whether the relatively stable environmental conditions on which human civilisation has depended for the past 10,000 years will continue beyond this century. If we fail to use this opportunity, many ecosystems on the planet will move into new, unprecedented states in which the capacity to provide for the needs of the present and future generations is highly uncertain." See So it is my career, and your career, that is going to make the difference. 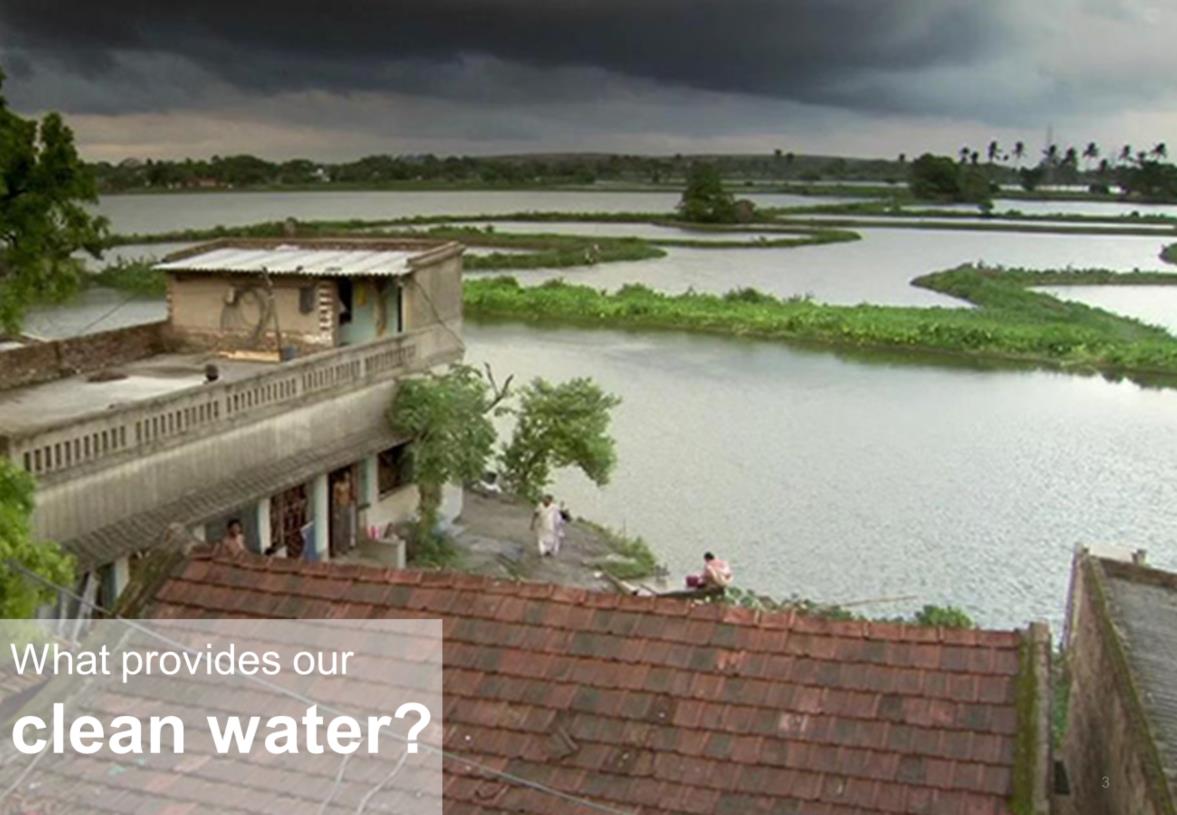 Slide 3 – What provides our clean water?
So how is biodiversity valuable, what are these ecosystem services? Think about where clean watercomes from. How does water become clean and safe to use before it gets treated and comes out ofthe tap? This photo shows the East Kolkata Wetlands. They are responsible for cleaning 1/3 of sewageproduced by the 10m people living in Kolkata, India. Wetlands and all the plants, roots, microbes inthem filter and clean our water, lock up pollutants, and can even break up heavy metals.
(1) "Using the purification capacity of wetlands, the Indian city of Kolkata (Calcutta) has pioneered a system of sewage disposal that is both efficient and environmentally friendly. Built to house one million people, Kolkata is now home to over 10 million, many living in slums. But the 8,000-hectare East Kolkata Wetlands Ramsar Site, a patchwork of tree-fringed canals, vegetable plots, rice paddies and fish ponds – and the 20,000 people that work in them – daily transform one-third of the city's sewage and most of its domestic refuse into a rich harvest of fish and fresh vegetables." See . 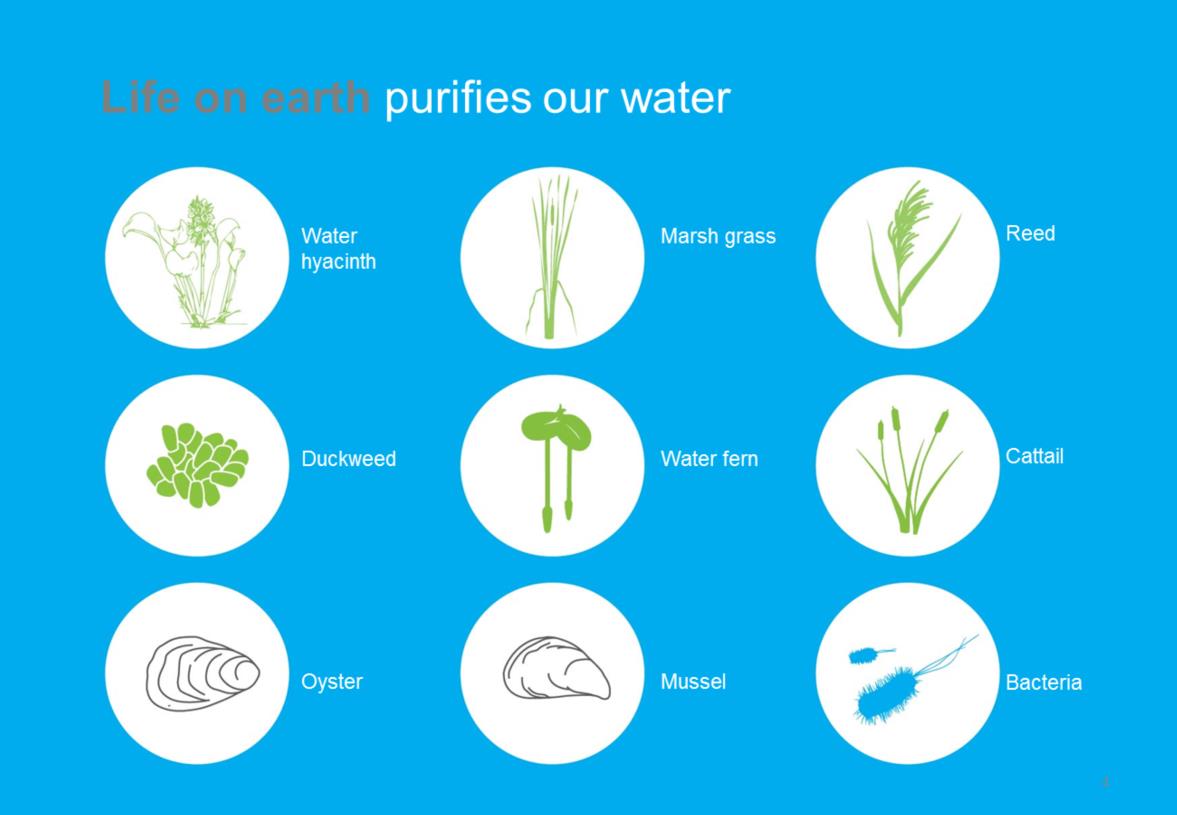 Slide 4 – Life on earth purifies our water.
These are some of the plants, animals, microorganisms which provide the "ecosystem service" ofpurifying our water. It is not just chemicals or the treatment plant that cleans our water, it is life.
To give another example, in 1997 New York City needed to increase its drinking water treatmentcapacity. It would cost US$8 billion to build a new water treatment plant. But what they actually didwas spend a fraction of that money, US$1.5 billion, to do the same job. How? By buying andconserving land in the watershed for New York.
(1) Some 90 percent of NYC's water comes from two watersheds in upstate NY and has enjoyed historically very good water quality. (A watershed is an area of land which drains into a body of water, such as a reservoir or the ocean.) In the 1980s due to concern over pollution, the US Environmental Protection Agency initiated a regulation that all surface drinking water supplies must be filtered. NYC obtained a waiver and avoided building filtration plants by buying and conserving land in the watershed, saving billions of dollars. Now the NYC drinking water system is the largest unfiltered drinking water supply in the US, providing fresh water to half the population of NY State daily, see and .
(2) Images (cattail, reed): Fast-growing plants rooted in wetland soils that have been used to treat water polluted with nutrients and heavy metals.
(3) Images (water hyacinth, duckweed, water fern): Floating plants which can absorb and store heavy metals such as iron and copper contained in wastewater. (4) Images (oyster, mussel): Restoration and management of oyster beds is being used to help tackle water pollution, eg in Chesapeake Bay, USA. One average sized oyster filters 200 litres of water a day. (5) See the Ramsar website for more about wetlands, . The RamsarConvention on Wetlands is an international treaty adopted in 1971 by 168 countries, to protect wetlands of international importance ("Ramsar sites"). Mai Po Marshes and Inner Deep Bay in New Territories is a protected Ramsar site. 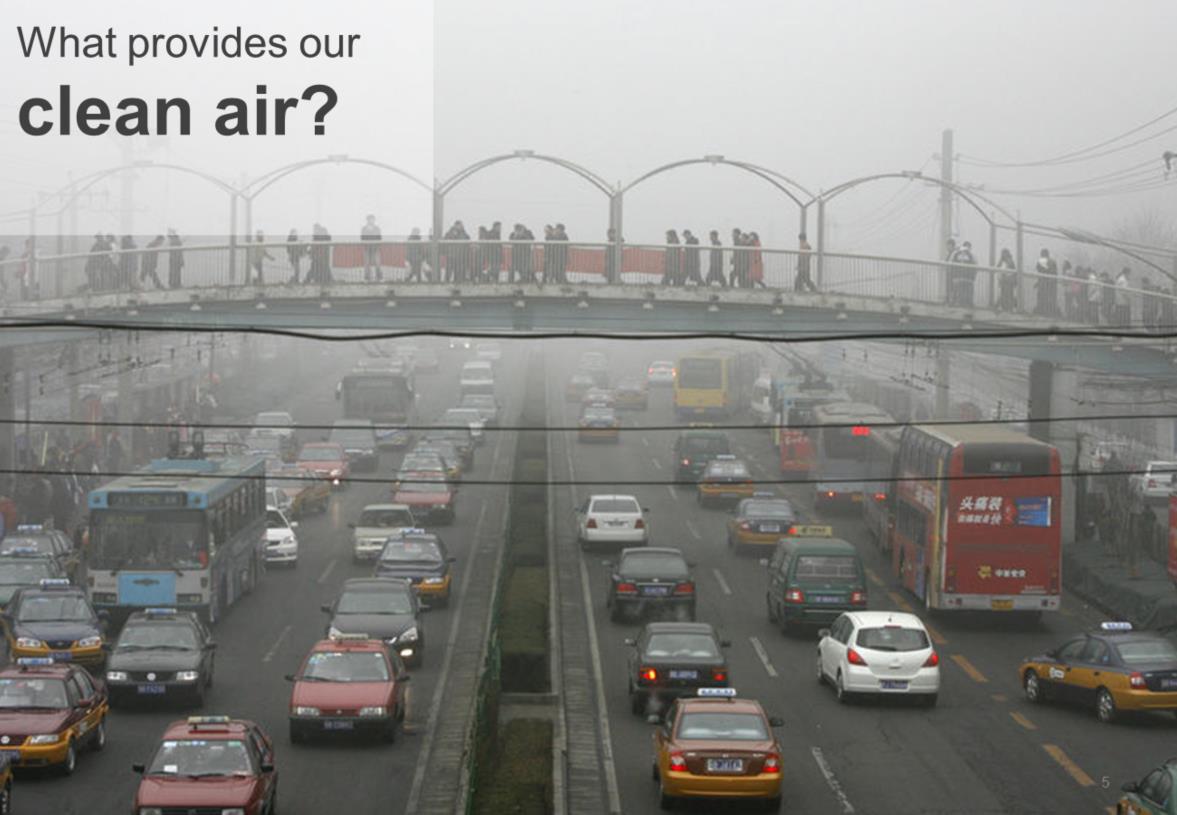 Slide 5 – What provides our clean air?
Another example is our air. You all know that plants photosynthesise, absorbing carbon dioxide andproviding oxygen.
But trees also absorb particulate matter, PM10 and PM2.5, the particles stick to the leaves of trees,trees also absorb nitrous oxides, sulphur dioxide and ozone. Some plants also filter out pollutantsincluding benzene and formaldehyde.
This is a picture of Beijing. HK is already the greenest city in China, but we can do better, and providean example to China.
(1) A study found that trees in London remove 850-2,000 tonnes of PM10 every year, and as a result the government is planning to plant a large number of trees in London's urban areas to tackle PM10 pollution. A mixture of trees gives the best result. See (3) How can HK be an example of sustainable development to China? We already are! Did you know that in a 2012 ranking, HK won the title of Best City in the world, beating Vancouver, Sydney and all the usual competition? HK won because of access to green space, access to cultural heritage, connectivity and compactness. See Let's continue this trend. What are your ideas? 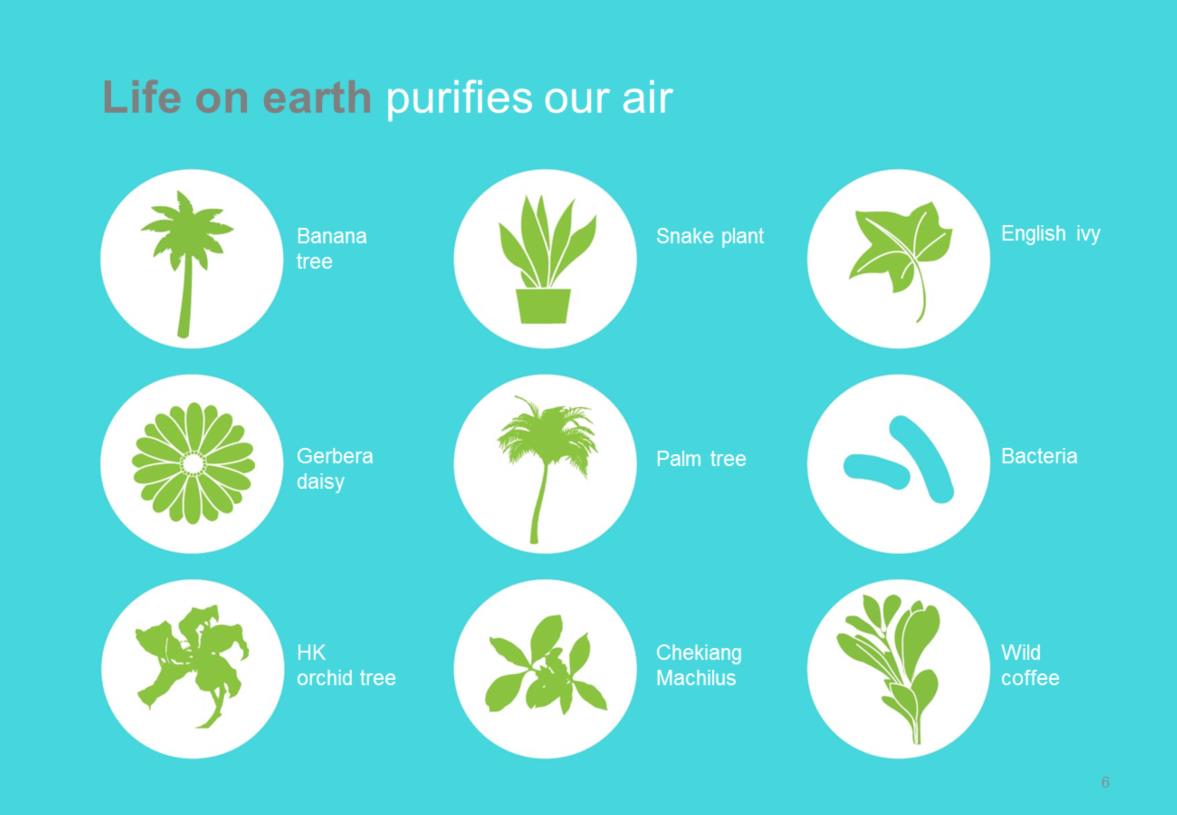 Slide 6 – Life on earth purifies our air.
All of these plants provide the ecosystem service of purifying our air, and don't forget the animals andmicroorganisms in the soil which contribute.
HK has 70 percent green space and 40 percent protected country park, and yet our air quality is howit is. You can check HK's air quality according to World Health Organisation (WHO) standards from theHedley Environmental Index website, which is a HKU project, and the EPD's new Air Quality HealthIndex. This shows we need to improve HK air quality.
But imagine what our air would be like without all this green space.
(1) In 2012 we only had 69 "clear days" where pollutant levels complied with the WHO's short term Air Quality Guidelines. See the Hedley Environmental Index, which shows HK's air quality as compared with WHO standards and real time economic costs of HK's air pollution, .
(2) The Environmental Protection Department's new Air Quality Health Index (AQHI) launched on 1 January 2014, . (3) Images (banana tree, snake plant, english ivy, gerbera daisy): The US space agency NASA found that these and several other common houseplant species were effective at removing pollutants and improving indoor air quality, see Also see this TED Talk about "How to grow fresh air" using just 3 common household plants, (4) Images (HK orchid tree, Chekiang Machilus, wild coffee): examples of HK native trees and shrubs found on our hillsides and which contributes to improving our air quality. See . 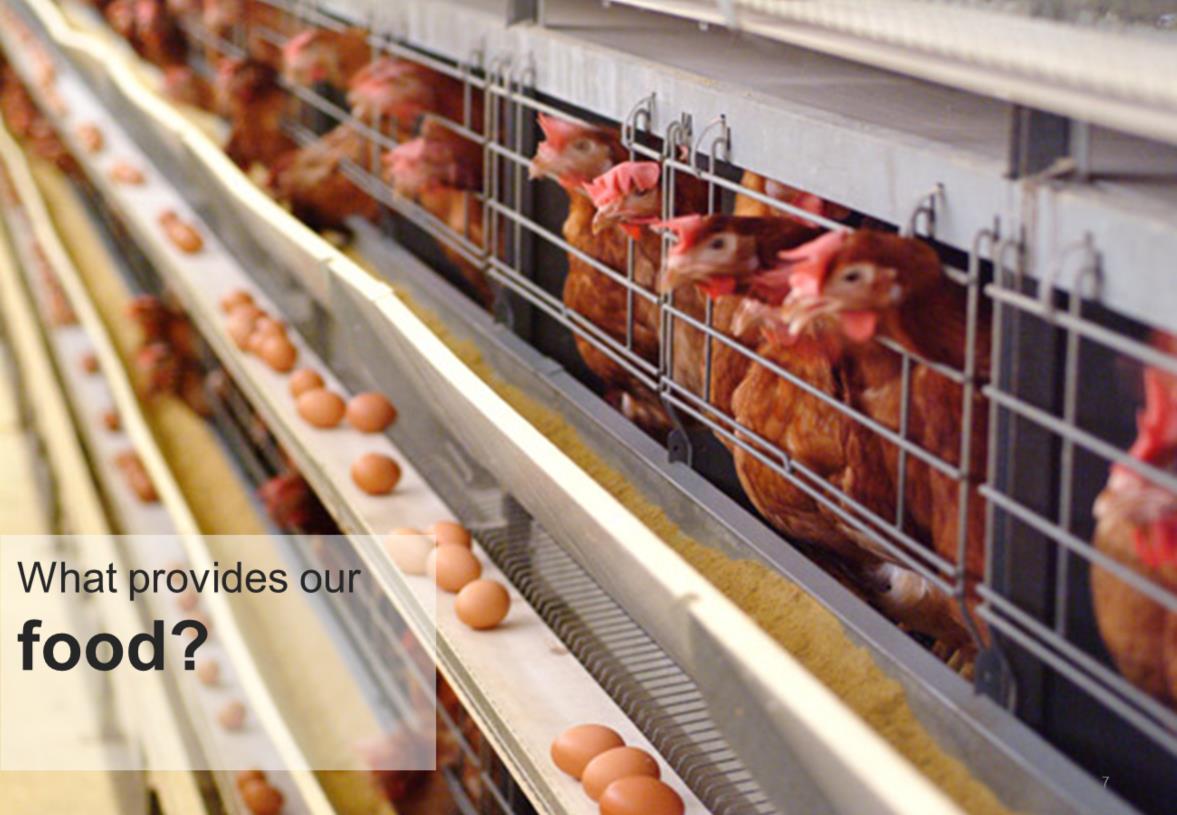 Slide 7 – What provides our food?
Another example of an essential ecosystem service that nature provides is our food. This photoshows chickens but they depend in turn on corn and other chicken feed.
To grow that corn we need bees to pollinate the crops. We also need the microorganisms in soil forgrowing the crops.
Then there is biological pest control by birds, reptiles, insects etc to eat caterpillars or other pests keeping the crops healthy.
The more biological pest control we have the less farmers need to rely on pesticides, which can beexpensive and can cause ecological damage.
(1) This infographic published by the UN Food and Agriculture Organisation (FAO) in 2013 shows genetic resources and biodiversity for food and agriculture, see 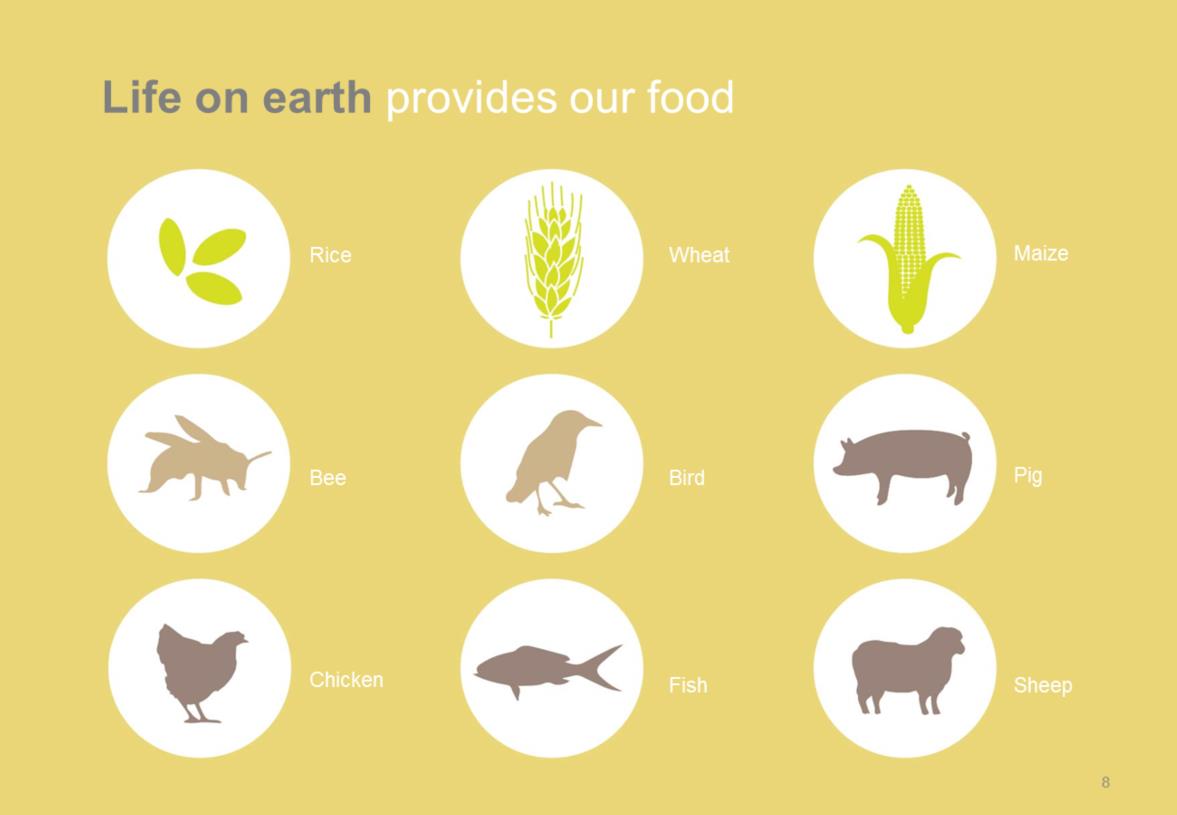 Slide 8 – Life on earth provides our food.
Here are some numbers about the value of biodiversity to food production.
Soil- More than 90 percent of the world's food depends on soil, excluding wild sea fish andhydroponic plants grown in water in greenhouses. Soil is full of animals, microorganisms and organicmatter and has incredible biodiversity, exactly like above ground ecosystems.
Pollination- How much does it cost to rent a colony of bees for 6 weeks? 30 years ago it was US$10,and in the last few years it has reached US$200 (HK$1,600)! 85% of the world's almonds are grown inCentral Valley, California. Almonds depend on bees for pollination and without pollination there areno almonds. There aren't enough wild bees to pollinate this many trees so farmers have to rentcolonies of bees to do the job, transporting them across the US in trucks.
Biological pest control- In Costa Rica, coffee farmers have been leaving patches of untouchedrainforest around their plantations, so that birds can eat a pest beetle. Stanford scientists calculatedthat this service is valued at US$310 per hectare.
(1) On soil biodiversity, see Did you know that there are totally different ecosystems of animals in soil around the world? Scientists tested soil DNA from the tropics to the poles, 96 percent of animals were only found in one location, see .
(2) On pollination, see Farmers need to rent colonies partly due to lack of wild bees, but also monoculture farming where large numbers of one type of crop plants are grown, without providing the natural habitat to support local bees. The UK government has recognised the value of bees to agriculture and biodiversity in the UK, and is developing a "National Pollinator Strategy" to protect UK bees, see . 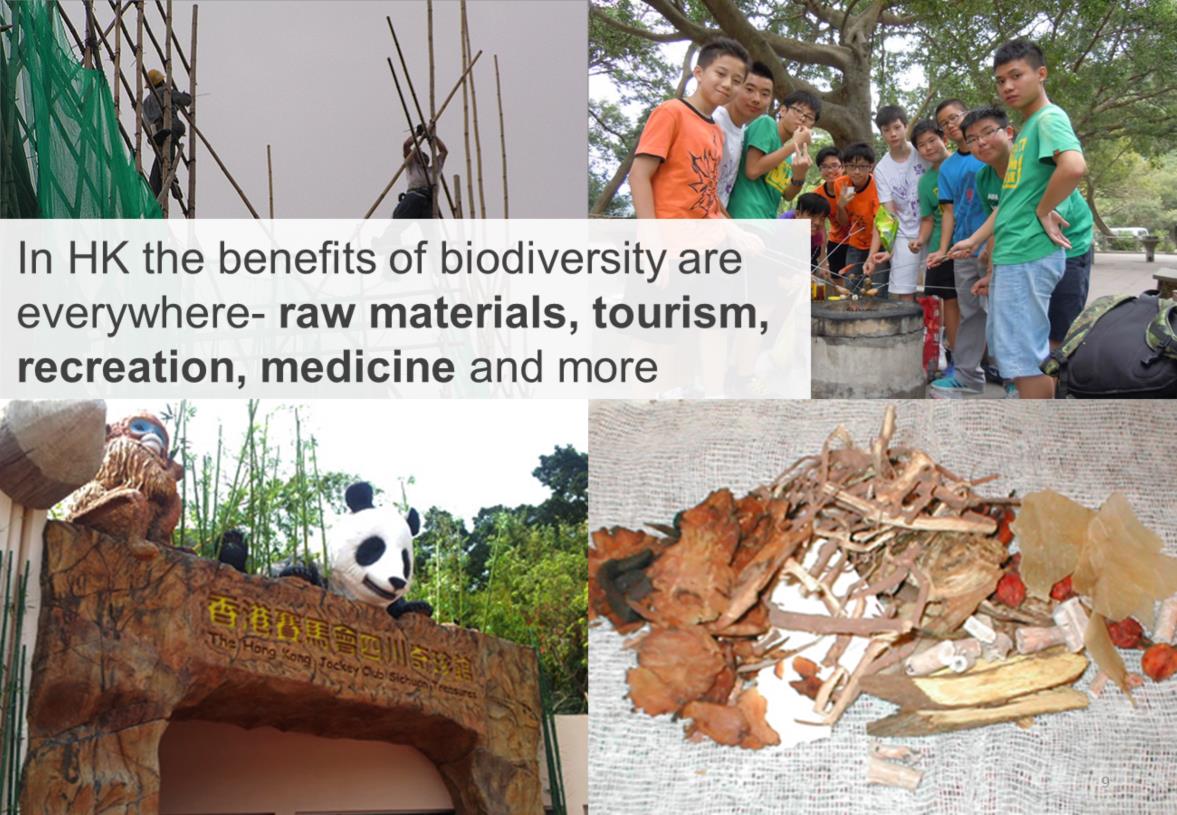 Slide 9 – In HK the benefits of biodiversity are everywhere. Raw materials, tourism, recreation,
medicine and more.

Little Peoples Place Early Learning Centre Diversity Calendar 2016 Celebrations can be as diverse as each of the children in a child care service. When incorporated into children's services appropriately, celebrations can be used to bring people together, to create a feeling of belonging and to develop a sense of community amongst families, educators and children.