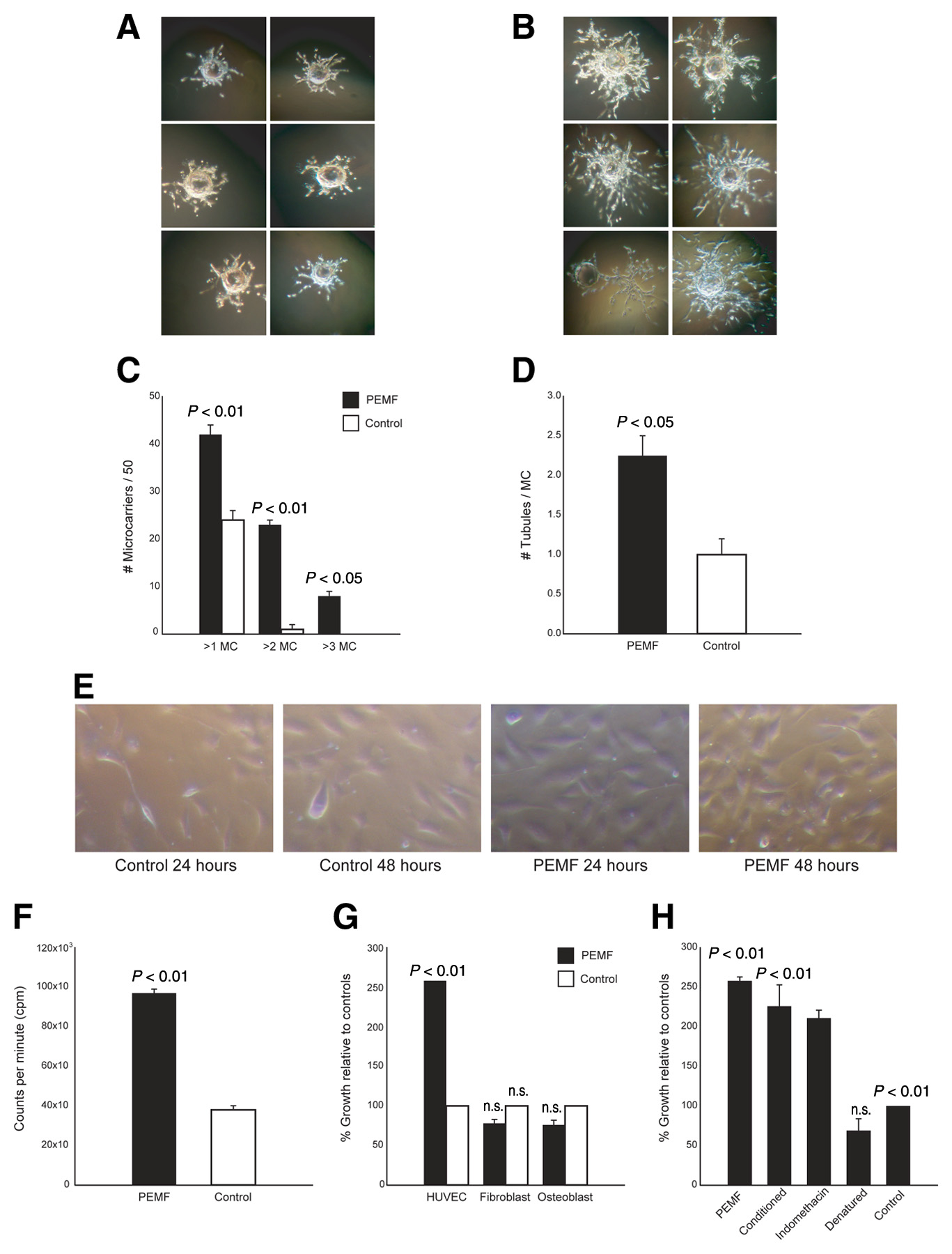 (page number not for citation purposes) Figure 1. PEMF stimulates 3-D angiogenesis in vitro. A 3-D angiogenesis assay was performed on HUVECs grown on
gelatin microcarriers and embedded in a fibrin gel. Representative pictures 7 days after HUVEC-seeded microcarriers were
cultured in normal conditions (A) or PEMF (B), demonstrating increased tubulization of PEMF. C) Fifty microcarriers
were chosen at random, and the number of microcarriers exhibiting tubulization of greater than 1 diameter (>1MC), 2
diameters (>2MC), or 3 diameters (>3MC) was quantified. D) Microcarriers were also assessed for the number of tubules
present on each microcarrier. The extent of proliferation of HUVECs over a 48-h period was examined by light
microscopy (E) and quantified by thymidine incorporation (F) and revealed that PEMF significantly augmented the
proliferation of HUVECs (P<0.01) but had no effect on osteoblasts or fibroblasts (G). H) Media cultured in PEMF was
able to enhance the proliferation of HUVECs, but denaturing the media ablated this effect. HUVEC proliferation in PEMF
was not inhibited by the addition of indomethacin, a prostaglandin (PGE2) synthesis inhibitor.
(page number not for citation purposes) (page number not for citation purposes) Fig. 2 (cont)

Figure 2. PEMF stimulates the release of FGF-2 but not VEGF by HUVECs. A) Northern blot analysis demonstrated
no change in VEGF mRNA when HUVECs were grown in PEMF or control conditions. B) VEGF ELISA revealed no
differences in VEGF protein production by HUVECs exposed to PEMF. C) The presence of recombinant VEGF R2/Fc
chimera or anti-VEGF antibody was unable to block the response of HUVEC proliferation to PEMF. In contrast, FGF-2
production was found to be twofold greater in PEMF conditions. D) FGF-2 ELISA verified that PEMF stimulated a
threefold increase in HUVEC production of FGF-2 protein. E) Northern blot analysis demonstrated an increased degree of
FGF-2 transcription in response to PEMF, normalized using GAPDH. F) The addition of FGF-2 neutralizing antibody
significantly reduced the degree of stimulation in response to PEMF. Control cultures exhibited no changes in proliferation
in response to the antibody. G) Media collected from PEMF cultures was able to induce significant (>100% above
baseline) proliferation in HUVECs and fibroblasts but not osteoblasts. H) Migration of fibroblasts and HUVECs in
response to media collected form PEMF-conditioned HUVEC cultures was threefold greater in both cell types compared
with cells stimulated with unconditioned media.
(page number not for citation purposes) 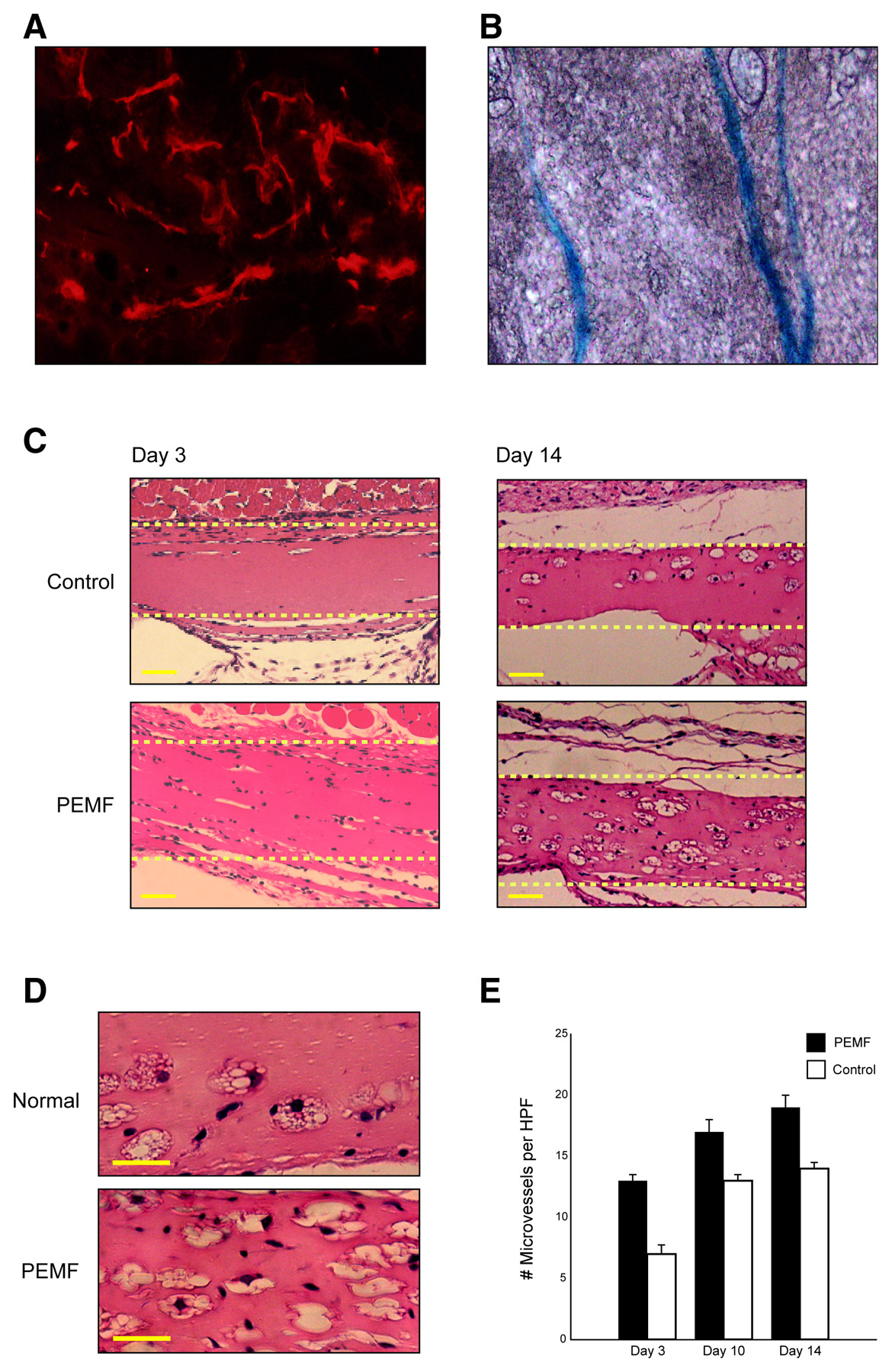 (page number not for citation purposes)
Figure 3. PEMF promotes angiogenesis in an in vivo Matrigel plug assay. A, B) Vascular ingrowth
within Martigel 2 wk after implantation was confirmed by staining for CD31 and Tie2. C) Representative
pictures of Matrigel (dotted box) from mice in control and PEMF cages demonstrate that exposure to
PEMF led to an increase in the degree of vascular ingrowth relative to controls. (Scale bars represent
25µm) D) High-power views of a representative section of Matrigel from control mice (top panel) and
PEMF-exposed mice (bottom panel) are depicted. E) Quantification of cells within the Matrigel
demonstrated a significant PEMF stimulation of vascular ingrowth at days 3, 10, and 14 (scale bars
represent 25 µm).
(page number not for citation purposes)

Re-thinking the benefits of genetic engineering compared to its drawbacks

Perceived Risks Incurred Along With Genetic Engineering's Alluring Benefits New approaches to the practice of medicine and to food production have arrived on the technolo-gical scene as a consequence of the knowledge gained through modern genome sequencing. Now Scientists and genetic engineers can modify and manipulate the fundamental genetic code of cer-tain crops and animals to benefit mankind. Although the stated goals of genetic engineering and genetic modification are noble, these activities are not without associated risks and drawbacks, which apparently have received much less attention. The discussion below is an attempt to reme-dy that oversight by discussing both aspects in one gulp in a form that is easy to understand, without hype, with the venom removed and the invective wording toned down (from how it was originally stated elsewhere in many cases). We eschew being extreme in portraying either view; otherwise, adversaries would dismiss it out-of-hand as not being worthy to even consider further. In compiling the list of risks (and benefits) here below, we rely only on information and facts provided by internationally recognized scientific journals, nationally recognized newspapers, and three of the Public Broadcasting System's (PBS) NOVA series [1]-[3]. Each of these particular sources is well known for thoroughly crosschecking its supporting facts and, moreover, is avail-able from most U.S. public libraries for further confirmation. We specifically avoided visiting or viewing Web sites, pro or con (such as those of the USDA, FDA, EPA, The Foundation for Eco-nomic Trends, Friends of the Earth, International Green Peace, or the Earth Liberation Front) because information posted on the Web, in general, is notorious for being self-serving (by dis-seminating biases interspersed with truth), ephemeral (since it can vanish), and time-varying. Our aim here is not to convert or dissuade any existing views away from the current U.S. policy of encouraging progress in genetic engineering/genetic modification because the apparent con-sensus is that it is important for the long-term welfare of the U.S. and the world, both scientific-cally and economically, to continue on this course. The objective here is merely to delineate the benefits (as perceived by its advocates) and the drawbacks (as perceived by its opponents) of Genetically Modified Organisms (GMO), all in one place. The worries of the GMO critics appear to all pertain, at a high level, to one or more of the following four questions: