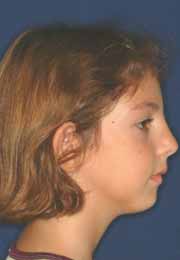 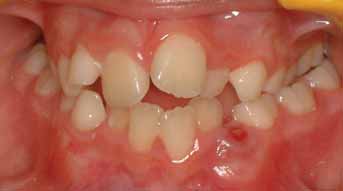 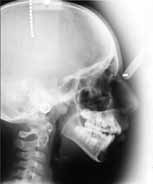 JIDA_FebMarch2008 30/01/2008 16:17 Page 32 Journal of the Irish Dental Association FIGURE 1: The anterior facial view of the patient at rest and smiling at FIGURE 3: The profile view of the patient and the lateral cephalometric her initial admittance. radiography at her initial admittance. FIGURE 2: The posteroanterior cephalometric radiography did not reveal FIGURE 4: The anterior and lateral view of the patient's occlusion before any significant asymmetry of any craniofacial structure. the initiation of orthodontic treatment. lower facial height (Figure 1). These were also evidenced by the
not show any signs and symptoms of TMJ dysfunction and no evaluation of the posteroanterior cephalometric radiograph (Figure
restriction was observed in her range of movements. The examination 2). In contrast, her profile view was concave; however, at rest position
of the panoramic and the corrected sagittal tomography revealed some interference of the lips was evident in addition to some tension some flattening and erosive lesions on both condylar articular surfaces of the genial muscle (Figure 3). Overall, her prominent ears affected
(Figures 5 and 6). The study of the lateral cephalometric radiograph
her facial aesthetics unfavourably and the aesthetics of her smile were showed a hyperdivergent facial growth type presenting skeletal Class impaired by the malaligned anterior teeth (Figure 1).
II division 1 malocclusion, mostly due to the posteriorly and The intra-oral examination revealed a late mixed dentition stage. She downward rotated direction of mandibular growth. An increase of the had a Class II division 1 malocclusion with bilateral posterior crossbite, lower to the total anterior facial height ratio was noted, in addition to severe anterior crowding of both arches, a reduced overbite and an a clinically significant decrease of the posterior to anterior facial height increased overjet (Figure 4). No dental pathology was observed with
ratio. These observations implied that mandibular growth was the exception of some plaque-induced gingival inflammation impaired, probably as a result of the condylar growth centres having restricted mostly to the crowded areas. The clinical TMJ evaluation did been affected by JIA.
32 Volume 54 (1) : February/March 2008 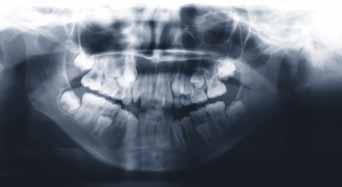 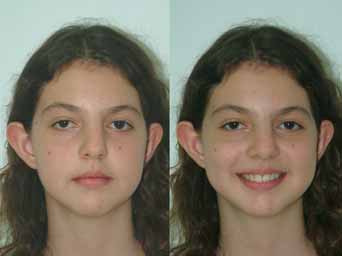