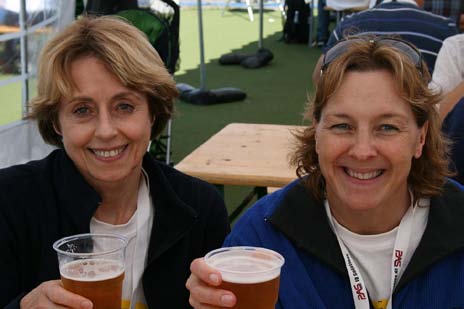 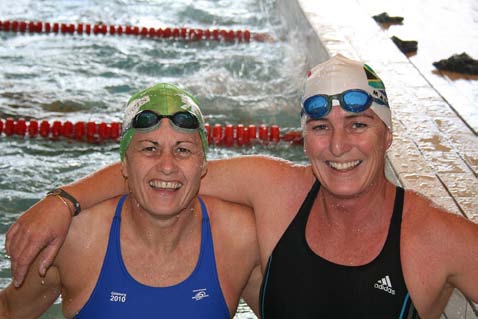 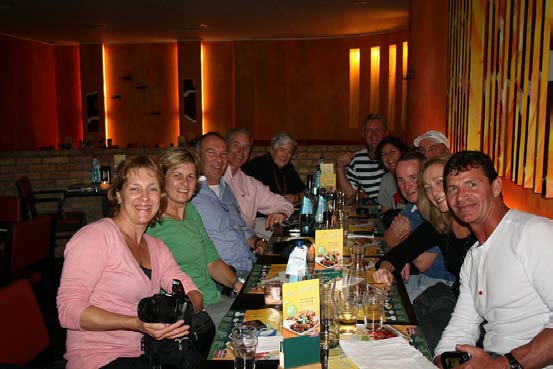 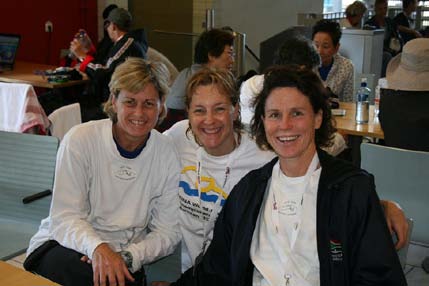 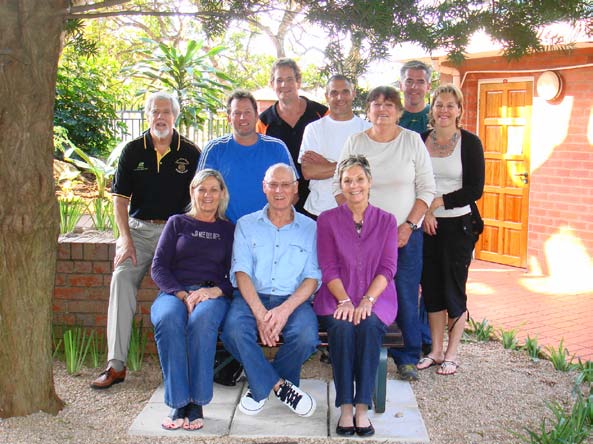 Left to right - Marcelle Strauss, Cecilia Stanford, Kevin Stanford,Rainer Kloos, Kasha Kloos, Henk Dokter,
Monique Dokter, Werner Ludick, Rod Holshausen, Anita Folsher and Danie Folscher - a night out to supper
Full results are available (thanks to John Peterson) on the SAMS websit
NEWS FROM SAMS:
The SAMS Presidents meeting took place on 24th July 2010 and was well represented by the Regions.
Thanks to all those who travelled to attend the meeting.

DIS-CHEM SUN CITY SWIM – 23RD OCTOBER 2010
This annual swim, held among the swaying palms, lush tropical gardens and crystal waters of the Sun City resort, is set to kick off the 2010 - 2011 open water swimming season in grand style. Last year approximately 2400 competitors, their families and friends enjoyed a fun filled day at Sun City. Once again sponsors Dis-Chem and Sun City have teamed up with support from USN, Voltaren, Garmin and Entrytime.com to ensure that this swim remains the premier event on the local open water swimming calendar. The venue is surely the best equipped and most beautiful of any swim in South Africa and the water quality and safety standards are unsurpassed. Swimmers at this year's swim will have a choice of 3 distances – 3000m, 1500m and 600m with cash prizes totaling over R37,000. With a number of new categories introduced, goodie bags for all pre-entries, medals for all finishers, free entry into Sun City including Valley of the Waves, and many spot prizes up for grabs, all levels of swimmers from beginner to champion are given ample encouragement. This year also sees the introduction of a team relay event with categories of Family, Non Corporate and Corporate. As if that isn't enough, competitors can enjoy the knowledge that they are contributing to several very worthy causes. Beneficiaries from this year's swim will include: • Gauteng Life Saving Association • Little Eden • Gauteng Masters Swimming Clubs • Caregivers Water Safety Awareness Campaign There is also an early payment special to reduce the cost of entering the race, see the website for details. For schools and swimming clubs, there is a bulk entry facility which closes on the Thursday 23rd September, 2010. Please call the number below for more details. For details on special accommodation packages and how to enter simply visit You can enter online via a link from our official websiteor directly at Call 011 844 0416/9 or email [email protected] for more details on the event. REGISTRATIONS:

The new registrations commended on 1st May 2010. A number of clubs have taken advantage of the Early
Bird Registration Date of 31st July 2010. The winner of this year's Early Bird Registration is Guy Harker from
Wahoo – he wins the cash prize which covers the registration fee for the season. Congratulations to you
Guy.
SAMS' CALENDAR
PERIOD OR DATE
30th September 2010 Registration cut off date for SC champs and for which SAMS' R90 registration fee is applicable. (NB for renewal registrations received after this date SAMS' fee is increased by another R70. For new members the fee remains unchanged) Regions hold SAMS' Short Course Champs. 1st November 2010 Results for SC champs to reach SAMS for collating 31st January 2011 Last date for registrations for the applicable season - to compete in the LC champs you must be registered by this date. 16th – 19th March 2011 LC Champs - Oudtshoorn 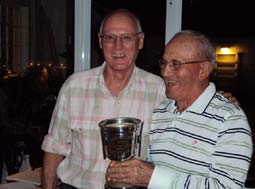 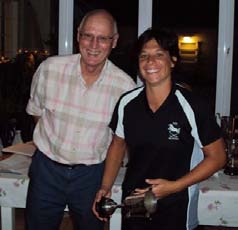 Venue: N.A. Smit Pool Park Rd Oudtshoorn
Dates: 16-19 March 2011
Fish Eagle Masters SWD look forward to welcoming you in the Karoo town of Oudtshoorn in March next
year-warm weather practically guaranteed! We apologise for any inconvenience caused by the change of
venue (was planned for George) but the Oudtshoorn Municipality has offered us sponsorship which we
cannot turn down in these difficult times.
If we can find a suitable venue, we will have an open water swim on Sunday 20th. Monday 21st is a public
holiday.
Enquiries:
Jill Black
Tel. 044 8711 242
Cell: 083 420 5029
Email:
NEWS FROM THE REGIONS:
KZN Masters Swimming Association Newsletter Number 1
2010/2011 (14th July 2010)

ANNUAL GENERAL MEETING
Our annual general meeting was held in May. The evening included not only election of KZN Masters
swimming Association Committee but the awards presentation of the 2009/2010 winners as well.
The awards were handed out by our Chairman, Roland Heuff who also hosted the meeting at his Westville
home.

THANK YOU LES TOOMS
Les Tooms, who has been the general secretary and a "pillar of strength" in KZN Masters Swimming, was
thanked by Roland Heuff for her dedicated work over the past years. Young, enthusiastic Nicola Martins was
voted on to the Committee as the new secretary. Les will continue this season to do KZN Masters Swimming
registrations and Gala results, Team Manager and Meet Manager.
Roland Heuff and Les Tooms WARM WELCOM TO EASTERN PROVINCE MASTERS SWIMMING
Eastern Province Masters Swimming Association (EPMSA) have taken the big step in fomulating their regional body. President : Graham Richards Vice President: Brian Elliott Secretary: Elsa Craig Treasurer: Denise Bosman Additional members are: Johan Swartz and Neil Torrance. From us all at SAMS it gladens the heart to know that Masters Swimming is growing. Well done to Elsa Craig for her tenacity and love of swimming to have been a pioneering part of this initiative. Graham, welcome to the "club"! May you and your team grow from strength to strength and fly the red and black elephant flag with pride at next Nationals. SOUTH AFRICAN MASTERS GAMES 2011

WHO MAY PARTICIPATE: Open to any master/veteran athlete who complies with the age restriction as
determined by the INTERNATIONAL MASTERS GAMES ASSOCIATION (IMGA).
Women 30 years and men 35 years (swimming and diving 25 years). AGE CATEGORIES as determined by
individual codes e.g.: 30-34; 30-39 or no age categories. Ages as at 31 December 2011
GAMES PROGRAMME- 27 APRIL TO 1 MAY 2011
Venue: Host city Port Elizabeth/Nelson Mandela bay. Individual codes to determine own dates for
participation.
CODES' OPENING AND CLOSING CEREMONIES/PRESENTATIONS to be conducted by each code at
venues.

cognitions and associated bodily sensations. Simultaneously they are directed to move their eyes from side EMDR – more than just to side, or employ some other form ofbilateral stimulation (BLS). The effect isto desensitise the client to the distressing a therapy for PTSD? memory but, more importantly, toreprocess the memory so that the Robin Logie considers a therapy whose mechanism remains unexplained

Progress In Electromagnetics Research Symposium Proceedings, Moscow, Russia, August 19–23, 2012 145 X-ray Image Processing in Studying Jawbone Tissues J. Mikulka and M. Kabrda Department of Theoretical and Experimental Electrical Engineering Brno University of Technology, Kolejn´ı 4, Brno 612 00, Czech Republic Abstract— Image processing in biomedical applications is strongly developing issue. Manymethods and approaches for image preprocessing, segmentation and visualization were described.This paper describes X-ray image processing. The aim of processing is to segment regions ofjawbone cysts and evaluate their local descriptors. It is necessary to choose suitable segmentationmethod because of adverse parameters of regions. The regions of the cysts are of low contrastand the pixel intensity distribution is not homogenous. The semiautomatic live-wire methodwas chosen. This approach to image segmentation is faster and more accurate than manualsegmentation. It is very good compromise between simple manual edge tracing and automaticmethods such as thresholding, watershed segmentation or other methods whose results mustbe post-processed. The second step of processing is to evaluate local descriptors of segmentedregions which correspond to cysts. Several parameters were chosen to describe these regions —region area, mean gray value of intensities, modal gray value of intensities, standard deviationof intensities, minimal and maximal gray value of intensities, integrated intensity, median ofintensities and shape descriptors of region (perimeter, circularity, aspect ratio, roundness andsolidity). Values of these parameters will be used in following development of semiautomaticprocessing method with regard to current assessment of cysts by doctors.