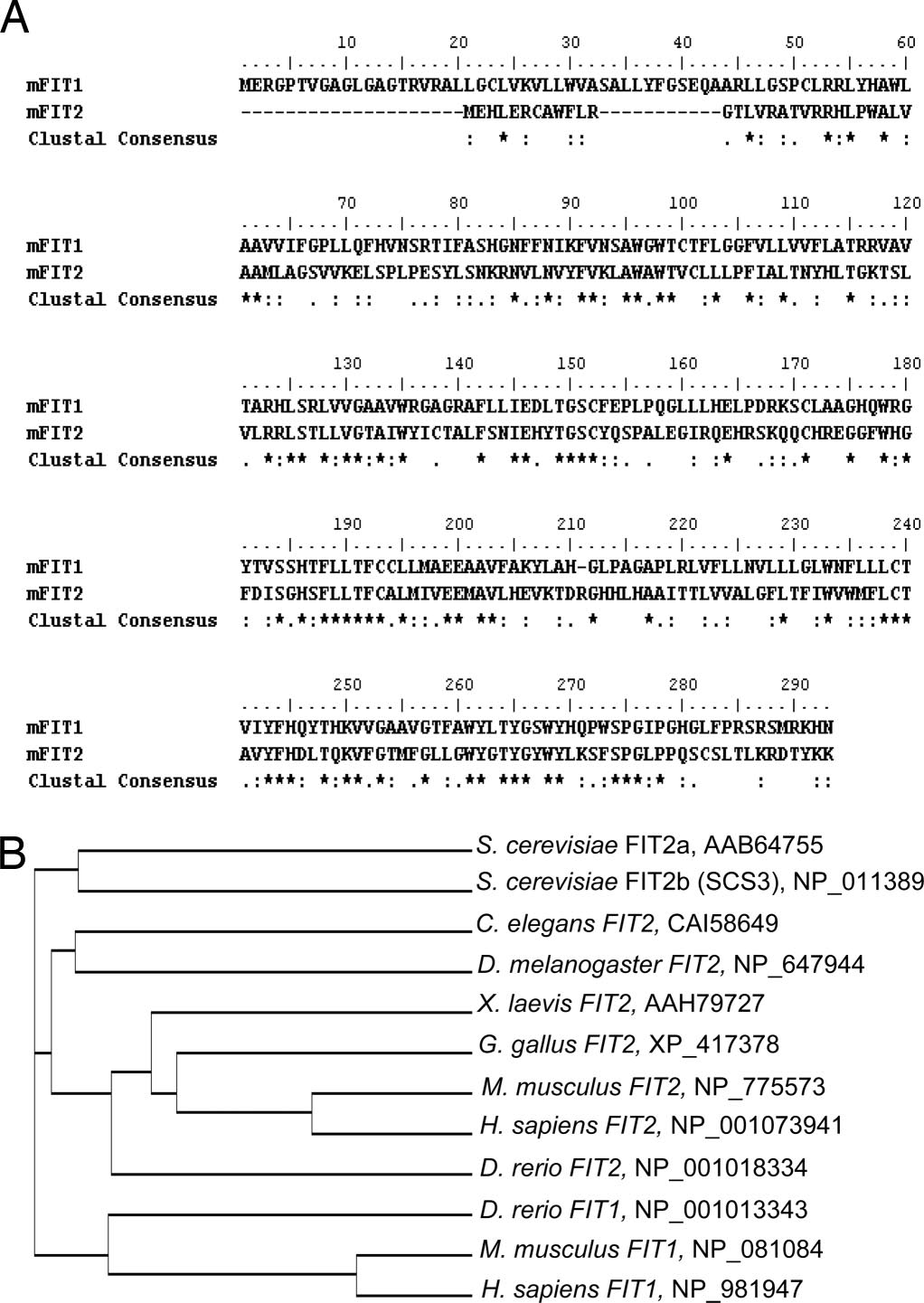 FITs Are ER Resident Membrane Proteins. Subcellular fractionation of
mouse heart membranes and confocal immunolocalization studies
were used to determine the subcellular localization of FITs. Frac-
tionation of mouse heart membranes by sucrose density ultracen-
trifugation indicated that both FIT1 and FIT2 colocalized with the
ER membrane resident protein Sec61-␤ (Fig. 2D) and slightly
lighter membranes (fraction 9). The bands found in fractions 1 and
2 represent nonspecific antigens of the incorrect molecular weight
and were observed by using these polyclonal antibodies to FIT1 and
FIT2 in total cell lysates from mouse tissues and in HEK293 cells
(Fig. 2B). To exclude the possibility that FIT proteins also localize
to lipid droplets, we examined the localization of FIT2 in murine
brown adipose tissue, a major tissue in which FIT2 is expressed
(FIT1 is not expressed in adipose tissue or adipocytes in culture)
(Fig. 2 A). Separation of lipid droplets from membranes of brown
adipose tissue indicated that FIT2 does not reside in the lipid
droplet fraction enriched in TG and the lipid droplet-associated
PAT family protein, perilipin (Fig. 2E). Expression of carboxyl-
terminal V5 epitope-tagged FIT1 or FIT2 in HEK293 cells resulted
in a clear reticular staining pattern that colocalized with a synthetic
ER marker protein, red fluorescent protein (RFP) having the ER
retention signal, KDEL, but not at all with the Golgi-specific
marker protein, galactosyl-transferase-RFP (Fig. 2F). Also noted in
some cells expressing FITs was the presence of single, large,
oval-shaped fluorescent ER domains (colocalizing with ER-RFP)
likely representing proliferated smooth ER that commonly occurs
as a result of overexpression of ER membrane proteins (18, 19).
Together these findings provide further support for exclusive ER
localization of FIT proteins. The V5 epitope tag on FIT1 and FIT2
did not abolish its activity (see In agreement with the ER
localization of mouse FIT1 and FIT2, one of the S. cerevisiae FIT2
orthologs, FIT2b (FIT2a has not yet been localized), has been
localized exclusively to the ER in a high-throughput attempt to
localize all expressed ORFs in S. cerevisiae (20). Together the data
indicate that FIT1 and FIT2 are ER resident membrane proteins,
the established site for TG biosynthesis and the proposed site for
FIT sequence analysis. (A) Amino acid sequence alignment of murine lipid droplet biogenesis.
FIT1 and FIT2 (35% identical, 50% similar). (B) Sequence alignments of FITorthologs in multiple species. Cladogram generated with ClustalW showing FIT-Mediated Lipid Droplet Accumulation.
the amino acid sequence homologies among FIT proteins. Accession numbers To determine whether FIT for each FIT ortholog are indicated next to the cladogram.
proteins play a role in lipid metabolism, we overexpressed FITproteins in HEK293 cells and examined the presence of lipiddroplets by using the fluorescent lipid droplet stain (neutral lipid contrast, the zebrafish genome contains orthologs of both mam- stain) BODIPY493/503. Overexpression of FIT1 or FIT2, at similar malian FIT1 and FIT2. S. cerevisiae has two FIT2 orthologs levels resulted in the accumulation of lipid droplets (Fig.
(designated here as FIT2a and FIT2b/SCS3), which is consistent 3A). As a positive control, cells expressing DGAT1, one of two with evidence that the ancestral S. cerevisiae underwent a genome- acyltransferases important in the committed step in TG biosynthe- wide duplication (17).
sis (11), showed multiple lipid droplets per cell (Fig. 3A). Compared Northern blot analysis of mouse tissues indicated that FIT1 is with mock-transfected cells, overexpression of DGAT1 or DGAT2, highly expressed in heart and skeletal muscle, as well as at lower a second acyltransferase important in the committed step in TG levels in the liver, kidney, and testes (Fig. 2A). Western blot biosynthesis (11), resulted in a 7- to 10-fold increase in levels of analysis of mouse tissues indicated that FIT1 protein was de- cellular TG, whereas TG levels increased only a modest 2-fold in tected primarily in skeletal muscle, with lower levels in the heart FIT1- and FIT2-expressing cells (Fig. 3B). Overexpression of FIT1 (Fig. 2B). Mouse FIT2 mRNA was ubiquitously detected as two or FIT2 did not change the levels of phospholipids to three transcripts, with highest levels in white and brown Cholesteryl esters (CEs) in FIT1-, FIT2-, or DGAT2-overexpress-ing cells significantly increased, compared with control cells adipose tissue, the heart, and skeletal muscle (Fig. 2 A). Western Because CEs also increased in DGAT2-expressing cells and blot analysis indicated that FIT2 protein was ubiquitously de- DGAT2 does not use cholesterol as a substrate, being highly specific tected, with highest levels in white and brown adipose tissue (Fig.
for diacyglycerol (12), we concluded that moderate increases in CEs 2B). The levels of mFIT1 and mFIT2 mRNA do not correlate in HEK293 cells is an indirect consequence of lipid droplet well with protein levels in the heart, indicating potential post- transcriptional regulation in this organ. An examination of We next tested whether FIT1 and FIT2 enhance TG biosynthesis human tissues showed that FIT1 was primarily expressed in heart by quantifying the rate of TG biosynthesis by using radiolabeled and skeletal muscle, whereas FIT2 was expressed in all tissues glycerol as a precursor for TG. Overexpression of positive controls represented on the Northern blot (Fig. 2C). Together these DGAT1 and DGAT2 led to a significant increase in the rate of TG analyses indicated that both mouse and human FIT1 have an biosynthesis (Fig. 3C) above mock-transfected cells as previously expression pattern more restricted to oxidative tissues, whereas shown (11, 12). In contrast, cells expressing FIT1 or FIT2 resulted FIT2 has a broader expression pattern, with highest levels in in similar rates of TG biosynthesis, compared with mock- mouse adipose tissue (human adipose tissue was not examined).
transfected cells (Fig. 3C). In addition, the mRNAs of genes Kadereit et al.
PNAS 兩 January 8, 2008 兩 vol. 105 兩 no. 1 兩 95 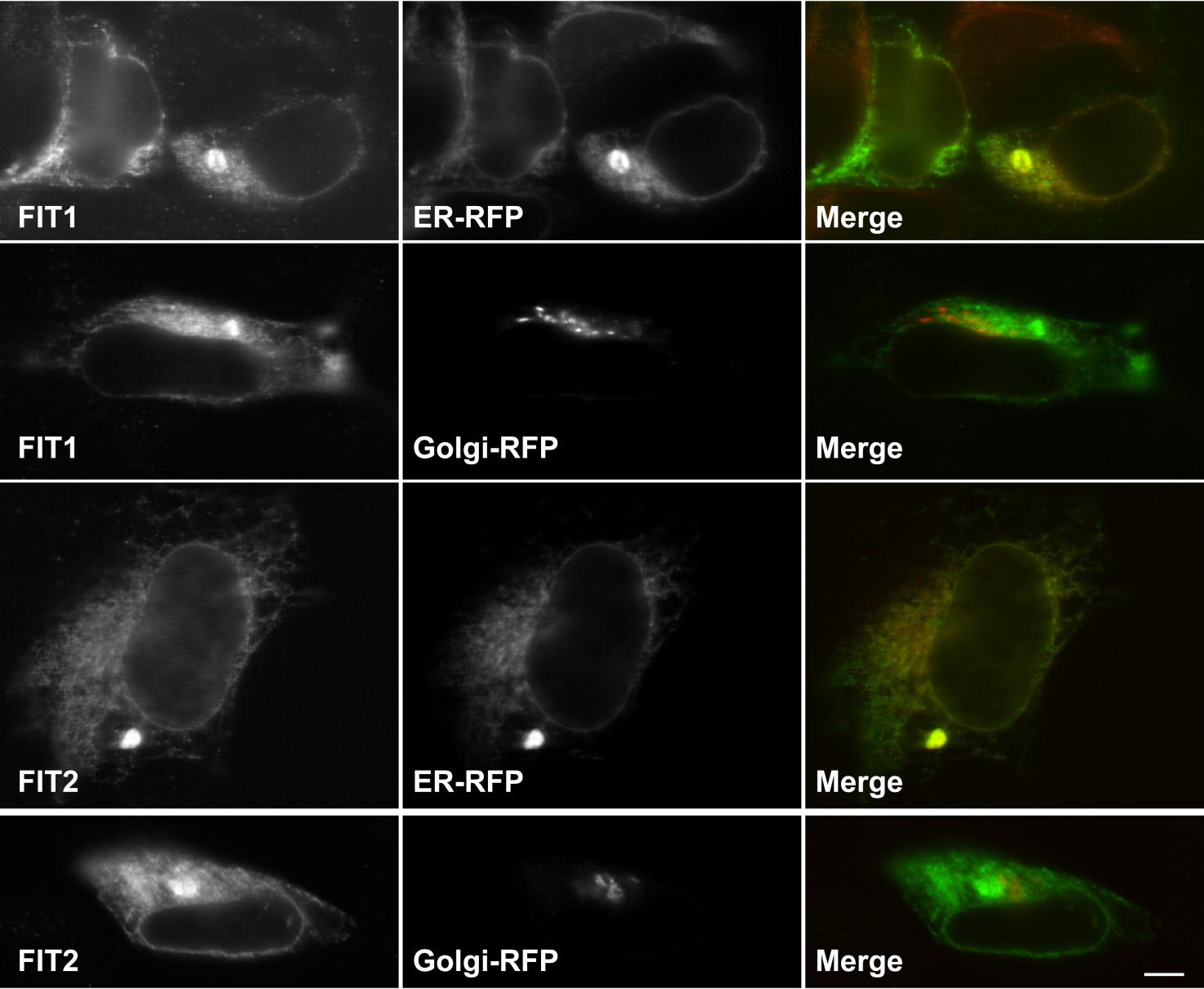 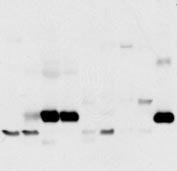 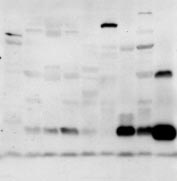