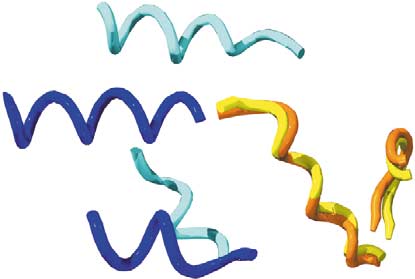 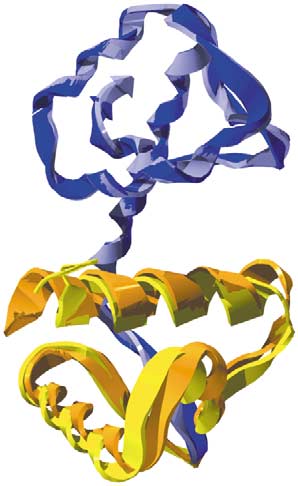 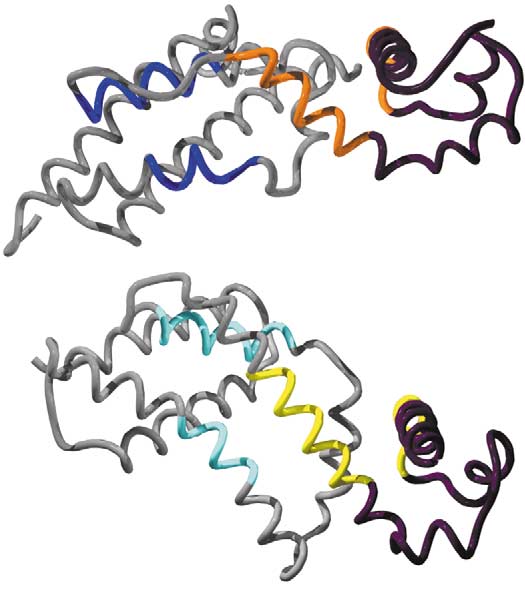 Multidomain proteins Vogel et al.
emphasises domain function in the context of domainneighbours in multidomain proteins, providing func-tional annotations for a subset of SCOP domains. The annotation is based on detailed examination of the pro-tein structures, which is essential for understandingthe precise molecular function of the domain and itscontribution to the function of the whole protein. Inthis domain-centric functional classification scheme,domains are classified into seven categories that encom-pass catalytic activity, cofactor binding, responsibilityfor subcellular localisation, protein–protein interactionand so forth.
Two generic principles emerge. First, a domain can per-form the same function, but in different protein contexts(i.e. with different partner domains). This is illustrated byThe WHDs in these examplescombine with different sensory, regulatory and enzymaticdomains, but maintain their function in that they target the protein to a specific sequence. In contrast, the WHD in acts as a substrate specificity pocket and has no DNA-binding activity at all. This domain has divergedand acquired a novel or modified function. In an analogyto linguistics, one can describe the two different fates of a dimerisation domain of the Iron-dependent repressor proteinsuperfamily. (b) Two transcriptional repressors composed of aHomeodomain-like domain and a Tetracyclin repressor-like C-terminaldomain are shown in such a way that the N-terminal domains (in blackwith orange and yellow interface peptides) are in the same orientation.
The C-terminal domains are clearly rotated relative to each other. In thisrepresentation, the difference in geometry is apparent as a downwardtilt of the C-terminal domain of TetR (dark blue helices) relative to theQacR C-terminal domain (light blue helices). (c) Residues forming contacts at the interdomain interfaces of the structures in (b). Theorange and yellow interface peptides of the N-terminal domains aresuperposed, and the difference in the positions of the blue C-terminalinterface peptides is clear. Again it appears as a downward tilt of thedark blue TetR helices compared with the light blue QacR interfacepeptides. Structural information. (a) Iron-dependent regulatory proteinIdeR from Mycobacterium tuberculosis (PDB code 1b1b, chain A )structurally aligned with diphtheria toxin repressor DtxR fromCorynebacterium diphtheriae (PDB code 1g3t, chain B The N-terminal WHDs are shown in orange and yellow, and the C-terminaldimerisation domains are in different shades of blue. They have about80% sequence identity to each other and the interface between the twodomains is about 1400 A˚2 in both structures. (b) Tet repressor D fromEscherichia coli (PDB code 2tct and the Staphylococcus aureusmultidrug-binding protein QacR (PDB code 1jt6, chain A The N-terminal domains are DNA-binding Homeodomain-like domains and areshown in black, with the peptides forming the interdomain interface inorange and yellow. The C-terminal domains are Tetracyclin repressor- like and are shown in grey, with interface peptides in different shades of blue. The chains shown here are both in the ligand-bound state. The two proteins have about 10% sequence identity to each other bothacross the entire sequence and in the residues that form contacts at theinterdomain interfaces. The interface between the domains is around Current Opinion in Structural Biology 2100 A˚2 in both structures. (c) The residues from the N-terminaldomains of the structures in (b) that form interface contacts, shown in Geometry of domains in different transcriptional regulators. (a) orange and yellow, were superimposed and are shown in the same Superposition of two chains shows that the geometry of the domain orientation. The difference in position of the C-terminal interface pair is conserved in the two proteins. The two structures are residues, shown in shades of blue, is apparent and corresponds to a homodimeric transcriptional repressors consisting of a WHD and a shift of 10 A˚ and a rotation of 408.
Current Opinion in Structural Biology 2004, 14:208–216 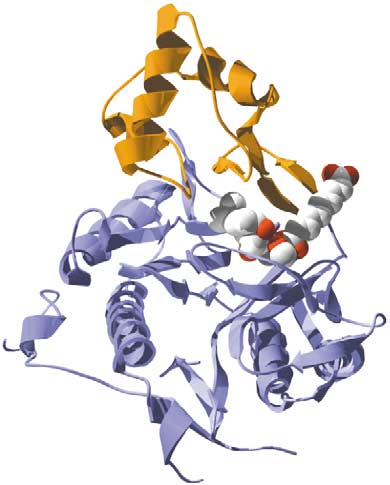 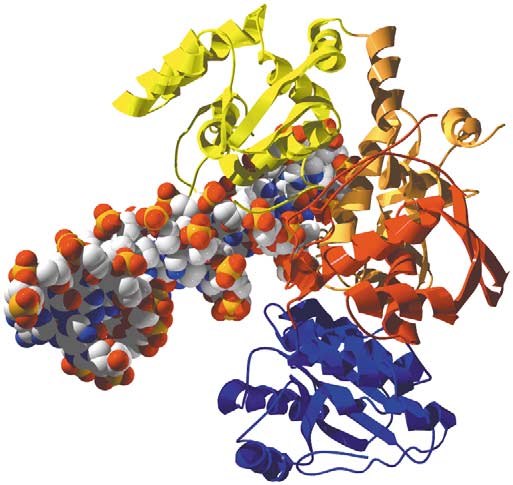 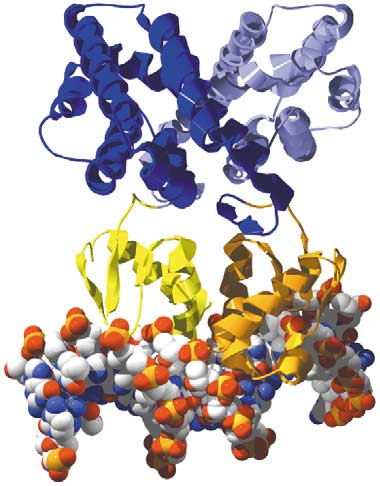