Compound Profiling and Toxicity
The Challenge: Understanding a compound's on and off target
activities with associated toxicities and indications
Utilizing a systems approach to drug discovery has generated a multitude of high affinity compounds for various classes of molecular targets with different degrees of disease state validation. As these compounds are progressed to the clinic, they pass through a number of defined assays to determine compound efficacy as well as possible toxicities. Although these assays give substantial information on certain toxicities and mechanism of action, toxic effects as well as mechanistic understanding can be found further downstream in the pre-clinical to clinical stage. It is very useful to have new tools for determining a compound's propensity for various toxicities earlier on in the process as well as tools for understanding a compound's on/off target effects as they relate to disease states.
The Solution: Global Analysis of Biochemicals
Biochemical homeostasis in the cell and whole organism is fairly well-defined with over 100 years of study and definition in scientific literature. The association between biochemicals and the pathways in which they reside is comprehensively mapped. Disease states as well as compounds affect this homeostasis often in defined and understood modes. In fact, biochemical changes are regularly tracked as indicators of disease state as well as compound efficacy/toxicity. For example, blood glucose is monitored as an indicator of diabetes and metabolic syndrome. In addition, cholesterol and lipids are markers for arteriosclerosis and coronary disease, whereas bile acids are used as indicators for liver function. These types of markers have proven successful in compound selection through to the clinic. A global analysis of biochemical changes, provides insight into these biochemical markers as well as hundreds of others. Biochemical profiling (metabolomics) can track changes in numerous pathways and correlate those changes to a variety of biological perturbations including: • disease state modification • mechanism of action of a compound • downstream effects of target inhibition/activation • off target effects of a compound In numerous studies, this approach has been able to reproducibly predict compound toxicities and provide mechanistic insight. Lastly, biochemical pathway modifications have been observed which have pointed to novel therapeutic uses.

Fenofibrate is a known hepatotoxin in rats with hepatomeglia as an endpoint. The purpose of this study was two fold. First to identify markers of cell proliferation and liver toxicity for comparison to investigational drugs incorporated into the study and secondly to gain mechanistic insight of PPAR alpha activity. In this study rats were dosed with fenofibrate (300mg/kg/day) and vehicle control in groups of 6. Two plasma time points were taken, 2 days and 14 days with subsequent 24 hour urine collection. Pathology was performed at day 2 and day 14 on the respective groups. Global biochemical profiling revealed profiles consistent with the known pharmacology of the agonist. There was clear acceleration of fatty acid B oxidation with concomitant reduction of plasma fatty acids (figure 1 and 2). Interestingly, cholesterol was lowered at day 2 consistent with the known pharmacology of fenofibrate but elevated at day 14, consistent with liver toxicity. A novel finding was the strong down regulation of the citric acid cycle which explains the energy utilization shift to fatty acid B oxidation (Figure Along with the pathways defining fenofibrate, pharmacology markers of toxicity were observed. Notably, bile acids were increased at day 2 and 14. Bile acids are known markers of liver dysfunction with plasma levels elevating as the liver fails to recycle them. Another pattern of liver dysfunction is the altered tryptophan pathway. Note the significant shift from conversion to serotonin to the alternate kynurenine and associated pathways (figure 4). Significant increases in 3-Methyl-L-Histidine were also observed which is a marker of muscle breakdown and indicative of the myopathy observed in the study. 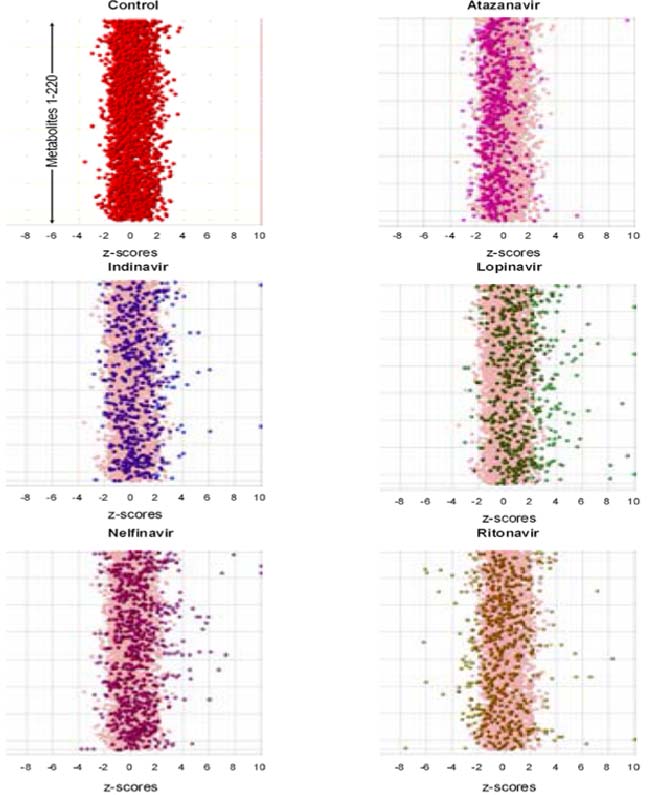 Protease Inhibitors (PI) have been invaluable tools in the battle against HIV infection, although
effective first generation inhibitors have been plagued by side effect profiles specifically in the area of dislipidemia and fat redistribution. BMS introduced a second generation PI with markedly fewer side effects. Experiments were designed to track biochemical changes comparing BMS's drug to marketed PI's. The purpose was two fold—to determine the biochemical differences elicited by the classes of compounds as well as to demonstrate biochemically the "cleanness" of the BMS compound. In this study 5 compounds were tested, Atazanavir (ATZ), Indinavir (IDV), Lopinavir (LPV), Nelfinavir (NFV) and Ritonavir (RTV), against vehicle control in HEPG2 cells. This table outlines the number of significantly altered biochemicals based on comparison to control. Notably, the study showed that that treatment with ATV induced no significant biochemical shifts in this experiment. Strength of biochemical shifts in rank order were: ATV<IDV = RTV<NFV<LPV. The scatter plots in figure 5 are a visual representation of these data. The y axis is the biochemical entities with the x axis standard deviations from the mean of the control. Each data point is a biochemical in an animal replicate. These data demonstrate visually how little ATZ perturbed the metabolome. Importantly, these biochemical changes were associated to energy production and fatty acid metabolism and correlated with observed side effect profiles. Follow on experimentation with LPV and ATV in HEPG2 cells and Adipocytes combined with patient plasma samples followed a similar pattern. In these experiments LPV showed increased numbers of significantly altered biochemicals in the HEPG2 system as well as plasma. The areas impacted that differentiated these compounds were in carbohydrate and lipid metabolism which fit well with the side effect profiles of these drugs. Lastly, biochemical changes were found that were common to the in vitro and in vivo systems suggesting that the cell culture base model could be used for early drug development.

Conclusion
Biochemistry, the working end of the cell, has proven invaluable in understanding a compounds action in a biological system. On and off target effects are readily visualized in a variety of model systems with excellent translatability. Utilizing global biochemical profiling toxicities are more easily observed with less cost, novel areas of compound impact are visualized leading to new indications, and drug mechanistic effects can be followed. Tethering these data to DMPK can give excellent insight into drug and metabolite effects as well.

mVision Analysis
Metabolon's mVision analytical platform is designed and optimized to detect small molecule biomarkers from numerous biochemical classes. Analysis by three unique analytical platforms separates and detects the broadest range of biochemicals as well as provides internal QC for biochemicals common to two or more platforms. This global, non-targeted approach offers a unique advantage over other metabolomics services that provide only raw data (e.g. mass spec signals) or analyze a limited number of compounds chosen from a restricted panel of detectable chemicals (targeted analysis). With Metabolon's solution, studies can be undertaken without the need for a complete understanding of the biology or biochemistry of samples. The three studies outlined in this application note are also available in greater detail in poster format. They can be obtained by visiting . www.metabolon.com │ Metabolon, Inc. │ 919.572.1711

RHYTHM IS THE CARRIER OF LIFE A company portrait of WALA Heilmittel GmbH "If one day we understand the rhythms of nature – this will be natural science in itstruest form." Dr. Rudolf Steiner 1 Dr. Ulrich Meyer, Member of the Management Board, and Karl Kossmann, co-founder and member of the WALA Foundation, at the employee information meeting