K. D. Stewart et al. / Bioorg. Med. Chem. 14 (2006) 7011–7022 Figure 3. (a) Illustration of the ‘NC-switch' rule (rule #10 in (b) Speciﬁc example of the ‘NC-switch' rule in converting the antibacterialdrug ciproﬂoxacin to Figure 4. The structure entry web page of Drug Guru. In this example, the structure of sildenaﬁl is accessed by entering the corporate code,A-325043, for this drug.
many times Drug Guru applies the rule needs to be an- tion experiment is shown in In practice, the swered. The example of carrying out the hydroxy-to- combinatorial expansion leads to a very large number methoxy transformation on the two hydroxy groups of of structures (thousands) for a rule set selection of dopamine, see best illustrates this feature. In 100–200 rules; therefore, the number of generations is the default mode, only the two mono-methylated result- currently limited to four.
ing structures are obtained. Optionally, an exhaustiveapplication of the rule produces a third di-methylated Within Drug Guru, there is an option provided to study structure. This diﬀerentiation between single and the output list according to calculated physical property, exhaustive application of a rule becomes particularly such as log P, rule-of-5, polar surface area (PSA), or important for rules involving replacement of hydrogen rotatable bonds. In test studies with known drugs, no atoms. In this case, selection of exhaustive replacements obvious bias or uneven trend in the calculated physical can lead to a very large number of output structures.
properties of the output molecules was evident: struc-tures with a continuum of both increased and decreased Another user option is to allow multiple generations of physical properties were observed with approximately application of the set of Drug Guru rules to an input equal frequency. A typical distribution is shown in structure. In the default setting, a single round of trans- using Gleevec as input. Sorting the output list formations is applied. Optionally, the output structures according to physical property is provided as a user op- from the ﬁrst round can be automatically re-submitted tion and can facilitate identifying structures of high for a second round of transformations. This has the interest. Of particular value is the mathematical diﬀer- interesting eﬀect of generating quite novel molecular ence in property when comparing the input and output structures for evaluation. An example of a two-genera- structures. When the ‘D-property' column is selected 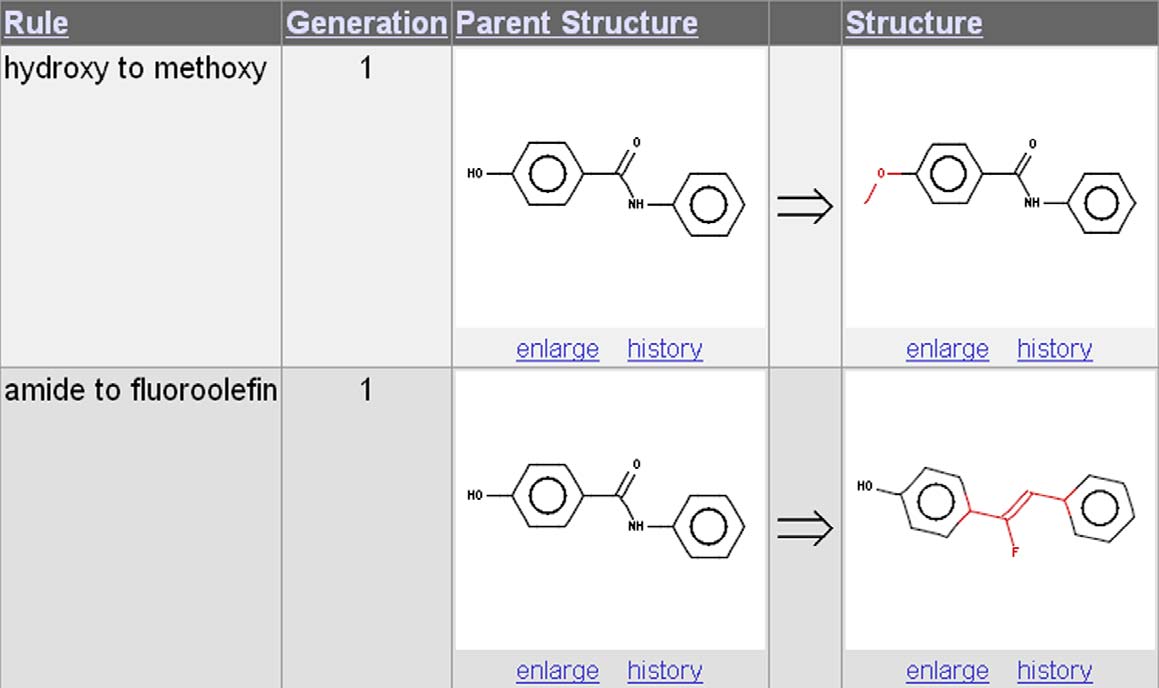 K. D. Stewart et al. / Bioorg. Med. Chem. 14 (2006) 7011–7022 Figure 5. Example output page from Drug Guru using rules 2 and 3 from The output page contains four columns, with each separate outputstructure as a new row. Column 1 is the name of the rule, column 2 is the generation number, and columns 3 and 4 are the input and outputstructures, respectively, shown as a 2D depiction. Atoms directly involved in the transformation are highlighted in color to facilitate visual inspection.
This example shows only two output structures, but in practice, lists of 50–150 structures are common.
for sorting, the user can quickly tabulate all of the struc- tion. In the application of 186 rules to the structure of tural transformations that give a desired result. For sildenaﬁl, 91 output structures were created by Drug example, users can see all of the changes that lead to Guru. While discussion of the entire output list is be- an increase in C log P or a decrease in PSA. In yond the scope of this publication, a few illustrative a D-PSA calculation is illustrated.
examples will be given.
As a critical aspect of Drug Guru, we note that the rule Five of the 10 rules listed in are applicable to sil- list is not static, and new rules can be added at any time.
denaﬁl and yield output structures represented in For example, new structural transformations reported in . Five rules do not apply because their functional the literature or proprietary research discoveries of poten- groups are not present in the input structure. The tial general applicability are excellent sources of new homologation-C rule (extend every substituent on a ring rules. There is also the capability of creating subsets of by one methylene unit) gives several non-redundant out- rules for special purposes. For example, in addition to put structures and only two, 36 and 39, are illustrated.
the set of general transformation rules described above, The ethano-to-S and ether-to-thioether rules give struc- we have included separate sets of rules for increasing sol- tures 62 and 69, respectively. In this example, the more ubility, decreasing albumin binding, or decreasing meta- interesting and diverse structures result from molecular bolic liability of the input structure. These rules are less framework changes. The NC-switch rule described well documented and more anecdotal in character, but above gives rise to two structures possessing new [6.5] nonetheless, still very useful in practice. As an example heterocyclic core rings, output structures 64 and 65.
of this kind of additional Drug Guru rule, one of the Gratifyingly, structure 64 possesses the heterocycle metabolism rules is a ‘pyridine-block' rule which adds a found in vardenaﬁl (LevitraÒ), a drug in the same phar- methyl group to the ortho-position of a pyridine. This rule maceutical class as sildenaﬁl and shown in .
is based on the strategy to sterically block the facile oxida- Another NC-switch output, structure 65, possesses a tion of pyridines with an ortho substituent. An example heterocycle not previously encompassed within sildenaﬁl from the Roche group of an application of this design rule or vardenaﬁl patents.In another example of a frame- has recently been publis work change, the ring-break rule results in output struc-tures 60 and 78 (only 78 is illustrated) in which thearomatic 5-membered ring of sildenaﬁl is opened to give an amino-ketone structure. An intramolecular hydrogenbond between the amino and carbonyl groups of 78 has 3.1. Example of Drug Guru applied to known drug system the potential of forming a intramolecular H-bond, andthus mimicking the aromatic ring of sildenaﬁl. As dis- Sildenaﬁl (ViagraÒ) is a phosphodiesterase-5 inhibitor cussed above, this ‘virtual' ring strategy has precedent approved in 1998 for treatment of male erectile dysfunc- in other studies. No literature reports of studies of chem- K. D. Stewart et al. / Bioorg. Med. Chem. 14 (2006) 7011–7022 Figure 6. Example of Rule History Page.
ical systems related to structures 60, 65, and 78 in inhi- ed drug design software: docking and scoring programs, bition of phosphodiesterase-5 or utility in treatment of such as DOCK, FlexX, AutoDock, GLIDE, Chem- male erectile dysfunction could be found. Therefore, Score, and GOLD, de novo ligand construction pro- compounds based on these structures may represent grams, such as LigBuilder, SkelGen, Ludi, GrowMol, interesting targets for further analoging around sildena- and SPROUT, scaﬀold-hopping programs such as ﬁl and vardenaﬁl. The exact structure of vardenaﬁl, LeapFrog, EA-Inventor, and FEPOPS, and pharmaco- shown in is produced from sildenaﬁl by Drug phore analysis programs, such as COMFA, Disco, Cat- Guru in a two-generation run when both the homologa- alyst, and GASP.However, these other programs have tion-C and NC-switch rules are applied. It should be operational strategies that are fundamentally diﬀerent emphasized that information from sildenaﬁl structure– from Drug Guru. Drug Guru does not rely on a pre-ex- activity studies was not used in the creation of the rules isting database of ligand structures or utilize energy- of Drug Guru; therefore, these examples shown here are based ﬁtness functions to score or assemble ligands.
truly derived from the history of medicinal chemistry, No prior structure–activity data are required. Drug implemented as computer-coded rules-of-thumb for Guru uses a set of pre-selected and well-deﬁned medici- nal chemistry rules to construct new structures. Rankingis optional and currently is based on calculated physical 3.2. Comparison with other computational chemistry properties. ‘Comparison' of Drug Guru with the com- puter programs listed above is useful mainly in thinkingabout synergy, rather than ranking performance capa- The overall objective of Drug Guru is to facilitate drug bilities. Many of these programs could conceivably be discovery, a goal that is shared with other computer-aid- used to help analyze the output of Drug Guru. We have 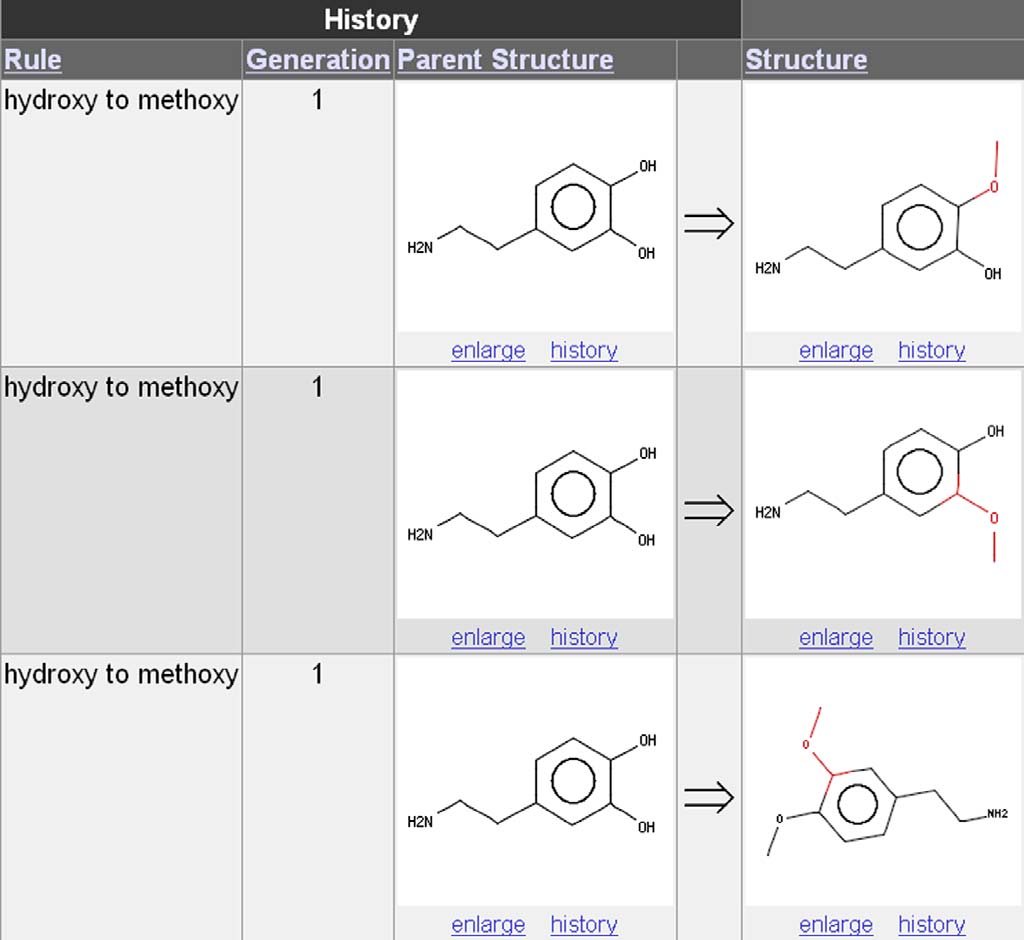 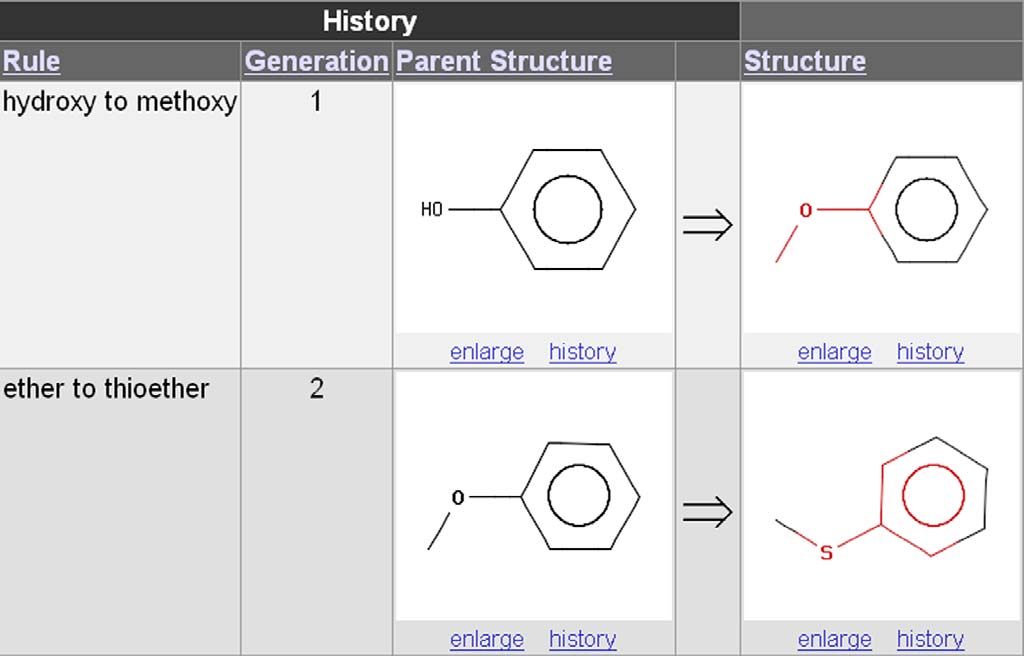 K. D. Stewart et al. / Bioorg. Med. Chem. 14 (2006) 7011–7022 Figure 7. Example of an ‘exhaustive' application of a Drug Guru rule. The ﬁrst two output structures result from a single application of the rule. Thelast structure results from application of the rule at all possible sites exhaustively.
Figure 8. Example of a ‘multi-generation' use of Drug Guru. The generations are indicated in column 2. In generation 1, phenol is transformed toanisole by the hydroxy-to-methoxy rule. In generation 2, the anisole formed in generation 1 is transformed to thioanisole by the ether-to-thioetherrule. 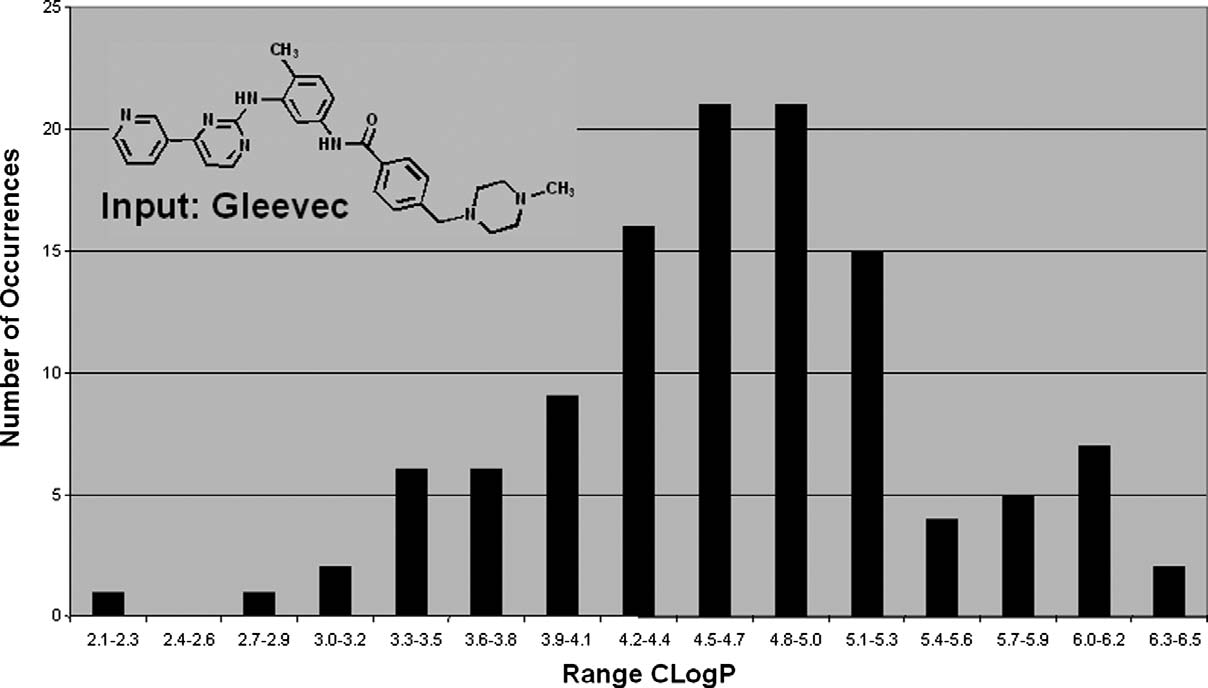 JULY 2006 ISSUE Save The Date DRUGS USED TO TREAT BPH MAY September 14 ALSO PREVENT PROSTATE CANCER The KnowledgeNet "In TheKnow" Awards Luncheon by Diane Johnson New York, NYDetails at: ew evidence shows that doxazosin and terazosin (alpha-blockers), currently being used for the treatment of BPH (Benign Prostatic Hyperplasia) and hypertension, may alsodecrease the risk of developing prostate cancer. In addition, they may prevent the