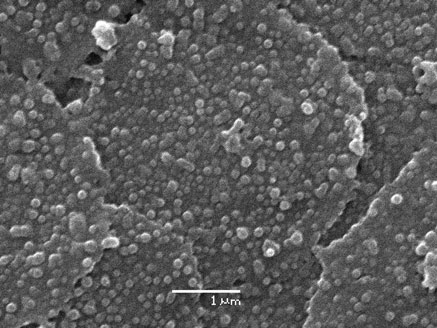 J Nanopart Res (2013) 15:1879 the cells (results not shown). Therefore, InPc-freenanoparticles, light and MP did not influence theresults obtained for cell viability of MCF-7 cellsincubated with InPc-loaded particles or the free InPc.
Effect of incubation time on phototoxicity A significant decrease in cell viability was observed aftera light dose of 7.5 J/cm2 when the MCF-7 cells wereincubated with InPc-loaded PLGA-PEG nanoparticlesfor 1 h since the viability decreased from (100 ± 5) %(number of control cells) to (44 ± 4) % (cells ? nano/InPc ? light) (Fig. ). A similar decrease in cellviability was obtained when cells were incubated withInPc-loaded nanoparticles for 1.5 and 2 h and irradiatedby the same light dose since viability was reduced to(49 ± 9) % and to (47 ± 10) %, respectively, suggest-ing the photodynamic effect was not changed after 1 h ofincubation (Fig. (100 ± 10) % (number of control cells) to (69 ± 6) %(cells ? free InPc ? light) only after 1.5 h of incubationand subsequent irradiation (Fig. ). The increase inincubation time of 1.5–2 h did not have any significanteffect on cell viability since viability was maintained at Fig. 1 a Absorbance intensity versus InPc concentration in (69 ± 4) %, suggesting the photodynamic effect was not several solvents. The absorbance values were determined at the changed after the incubation time of 1.5 h (Fig. ).
InPc maximum absorbance wavelength for each solvent Neither encapsulated InPc nor free InPc caused cytotoxic (682 nm for MP, 683 nm for DMF, 686 nm for DMSO and683 nm for EA). The solvent with the highest absorptivity effects (without light) to MCF-7 cells under the same coefficient was chosen as the best solvent for InPc. b Absorbance conditions (Fig. ). Statistical analysis shown that the spectra of InPc (5.0 lmol/L) dissolved in MP and in the mixture encapsulated InPc was more efficient than free InPc in of 30 % (v:v) of MP with 70 % of dichloromethane. The PLGA-PEG also did not change the InPc spectrum (inset) when thepolymer was dissolved in the mixture of MP and dichlorometh-ane, and it did not show absorbance from 300 nm to 800 nm interact more efficiently with cellular membranes(Win and Feng The PLGA-PEG nanoparticlesexhibited an InPc entrapment efficiency of around(72 ± 6) %, a loading value of around (0.43 ±0.04) % and a zeta potential of -33.9 ± 3 mV.
Viability of MCF-7 cells in action involvingonly InPc-free nanoparticles, light and MP The photocytotoxic effect on the viability of MCF-7cells after incubation and irradiation with InPc-freenanoparticles was not observed. This is consistent with Fig. 2 SEM images of InPc-loaded PLGA-PEG nanoparticles, PLGA-PEG biocompatibility. The light emitted by the prepared by the emulsion/evaporation method using PVA as laser and MP (0.18 % v:v) were also not cytotoxic to 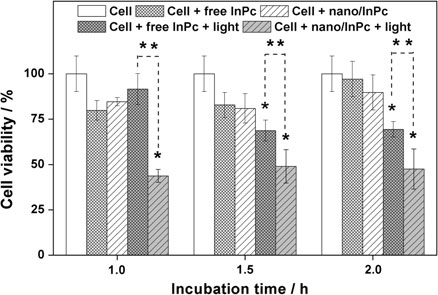 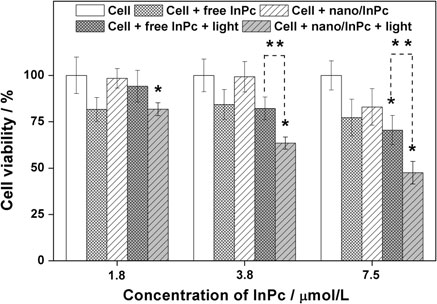 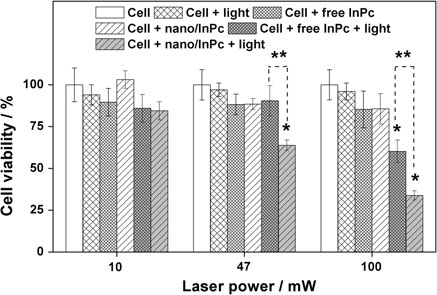 J Nanopart Res (2013) 15:1879 Studies have shown that hydrophobic photosensitizerstend to be localized in cytoplasmatic membrane (Moor; Ochsner ). However, the intense fluores-cence of free InPc was also detected in regions awayfrom of the cell. The free InPc solution in the culturemedium was also monitored by dynamic light scatter-ing to evaluate the presence of aggregates. Theoreti-cally, free InPc aggregates should not be detected if thesolution was homogenous, but when free InPc solutionprepared in MP was diluted in the culture medium, theaggregates were detected in initial of the experiment(Fig. c). The average size of small aggregatesincreased from (209 ± 10) to (283 ± 13) nm after1.67 h of incubation. One population [(1.9 ± 1) %] oflarge aggregates were detected after 2.0 h. However,the large aggregates were eliminated when TweenÒ 20(0.24 mmol/L) was added in medium culture suggest-ing that the large aggregates were reduced to smallersize. These results suggest that the molecules of freeInPc aggregated in culture medium due to the hydro-phobicity of InPc (as will be shown later). Therefore,the intense fluorescence detected outside of the cellwas emitted by aggregates of free InPc.
Fluorescence from InPc-loaded nanoparticles or free InPc within the nucleus was not observed. Thus,there is no risk of photocarcinogenesis for survivingcells (Berg et al. ).
Cells incubated with nanoparticles of PLGA-PEG without entrapped InPc did not present fluorescence(not observed for nanoparticles loaded with InPc is onlydue to the photosensitizer. The fluorescence intensityof internalized InPc-loaded nanoparticles was higherthan that of the free InPc, suggesting that a greater Fig. 7 Average size and percentage of InPc-loaded PLGA- amount of encapsulated InPc was internalized in the PEG nanoparticles incubated with a the culture medium andb water. Nanoparticles were incubated from 0 to 2 h and the cells in comparison with free InPc. This hypothesis average size and percentage of particles were measured in a was evaluated by a quantification of the amount of predetermined time. c Average size and percentage of aggre- encapsulated and free InPc internalized in the cells.
gates of the free InPc incubated with culture medium was also Although the results have corroborated the confocal measured. After 2.0 h of incubation, a TweenÒ 20 solution(0.24 mmol/L) was added to the nanoparticle or the free InPc micrographs (not shown), it was not possible to solutions and the size and percentage of particles were measured consider the quantification of the amount of encapsu- again. Each data point is the mean ± SD of three values lated and the free InPc into the cells since thenanoparticle aggregates and free InPc aggregates were the InPc for the aqueous phase due to the interaction not eliminated when the cells were rinsed with with ethanol and PVA (results will be published).
phosphate-buffered saline solution. Probably the Similarly, an intense fluorescence of free InPc results reflected the amount of encapsulated and free aggregates was localized in the peripheral region of InPc localized inside and outside of the cell. Studies MCF-7 cells (Fig. suggesting that free InPc have shown that the encapsulation of photosensitizers aggregates could be localized on the surface of cells.

The economics of irreparable harm in pharmaceutical patent litigation