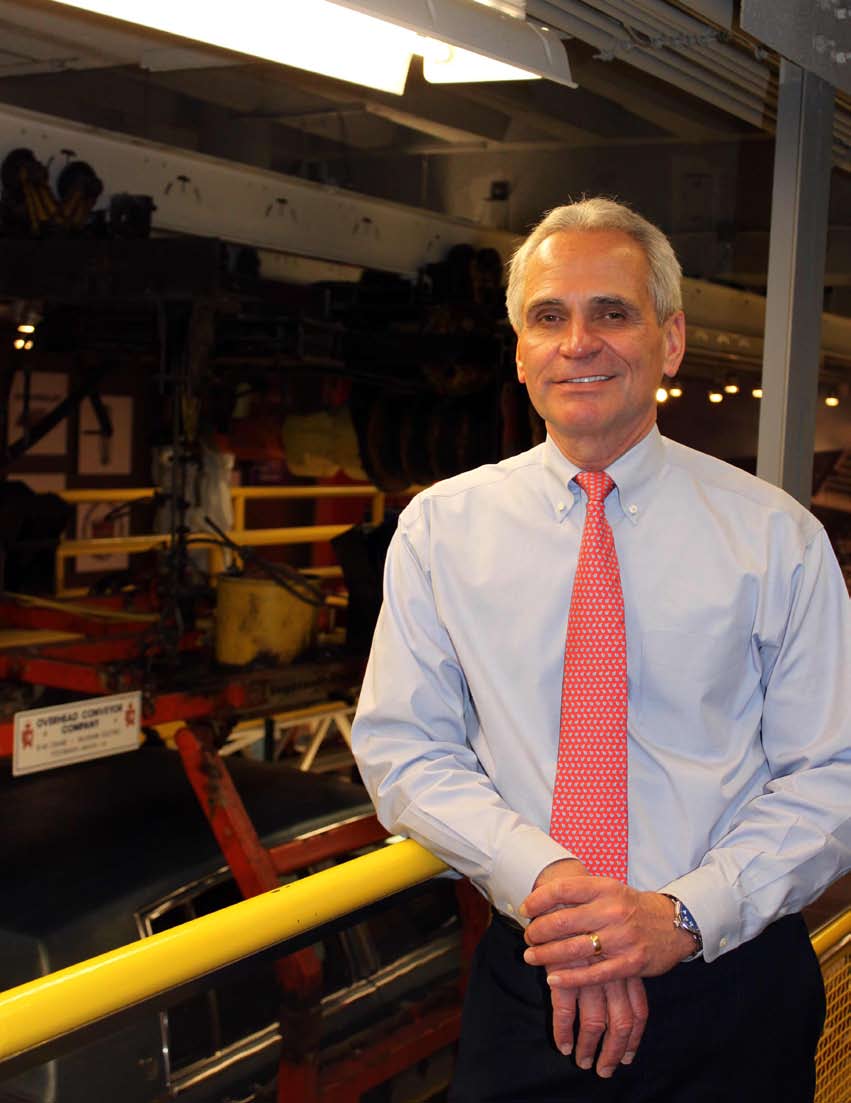 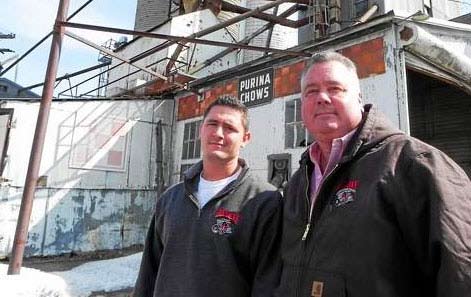 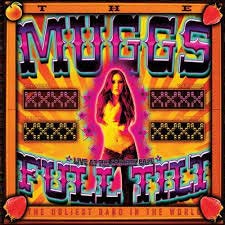 FROM THE MACOMB DAILY
holsbeke ‘82 to restore historic Silos in new haven Holsbeke Construction of Mount Clemens wil open its second location when it moves into the former New Haven Farmers Elevator building later this spring. Owner Chris Holsbeke ‘82 said work is currently being done on the 12,000-square-foot Farmers Elevator before the
company official y moves in. The Farmers Elevator closed in December and was sold shortly after in an auction.
Holsbeke plans to renovate the landmark silos that grace the 2 ½-acre property and have been a part of New Haven's landscape for over five decades. "In order to keep up with our client's needs we need to grow to service them better," Holsbeke said. "We met a couple times with New Haven officials to let them know we want to lease out the excess space to other contractors. It's a large property with opportunity." He also has plans for the historic silos on the site. "We also discussed the old Purina Dog Food silos on the property and agreed we would not tear down the silos," Holsbeke said. "It's historical. There's a train depot across the tracks and they are part of the history. They've been here for 55 years." Holsbeke said in order to keep with the theme of New Haven's historical district, he also wants to renovate the old grain house and use other outlying building space for remodeled offices. "We want to keep the historical value while running our operation out of a remodeled existing building," he Holsbeke Construction Inc., 325 North Ave., was started by Chris Holsbeke's father Ray, who at 77 years old stil works for the company, which has experienced growth over the last five years. Holsbeke has added new trucks to his fleet, upgraded equipment and hired additional employees. "We Chris Holsbeke ‘82 (right) with his son Christopher. have 50 employees," Holsbeke said. "Since high school, I got two guys who stuck with me (Tom Ulrich and George Fresard) and now the young generation is coming in. We stil have the old guys, but we want it up where the young guys can make a living running a construction business." Holsbeke said his son, Christopher, 21, and nephews, Ricky Fox and Tim Boddington, are currently getting the New Haven operation up and running. "We stil have some work to do in New Haven, but it's going to be great for us and the community," he said.
Holsbeke plans to move the Holsbeke Masonry Division to New Haven while keeping the Concrete Division in Mount Clemens. He said there are ongoing discussions with New Haven officials to solidify any plans. "They have to work with us," Holsbeke said. "They've shown Ricky Fox noted al employees are on board with the new move to New Haven, if "clean-up day" last week was an indication. "The new property was not exactly move in ready for Holsbeke. Most of the buildings were stil ful of boxes, office furniture, parts, material, and the trees and bushes were overgrown," said Fox, who noted 25 Holsbeke employees donated their time to help clean up the site and get ready to "We fil ed three dumpsters with garbage, cleared overgrown trees and bushes and basical y ‘Spic and Span(ed)' the entire site," Fox said. "There is stil a lot of renovation to come." Fox echoed Holsbeke's vision of the new business site. "It starts with working with the City of New Haven to try and preserve the historical value of the property," he said. "The silos on the property are very recognizable and can be seen from miles away and wil remain," Fox said. "We are looking forward to becoming part of the New Haven community - they have treated us great!" For more information on Holsbeke Construction, visit: www.holsbeke.com or cal (586) 468-2971.
FROM LET IT ROCK
The MuGGS album review The first career-spanning concert document from the Rock City's primal bluesmen pul s no punches and hits hard. A devil's dozen years on Earth have a crossroads ring to it, so that's quite a time for this Detroit trio to crown their three studio platters with one laid down on-stage. More so, it would be a sin not to preserve such a fire-and-brimstone performance for posterity: roaring with righteous anger in a format you can't hide in, the band deliver a smoking set of originals peppered with wel -chosen covers. From the opening hat trick off their latest album, "Born Ugly," on to the bel -biting epic "Doc Mode" which closed their 2005 debut, the group fil s the space with immense, if tasteful y dirty, groove firmly rooted in the early '70s, yet it takes them some time for tunes to break the hard veneer and catch on. Once the lazy blues of "Sturm Und Drang" crawl in, there's no turning back.
Vocalist Danny Methric ‘90 laying down the guitar riffs into the bass bed shaken by Tony DeNardo ‘90 and
stirred with Todd Glass' drums, the trio let their col ective "hard" down on a string of Rory Gal agher's smashes scattered across these two discs – his combo an obvious blueprint for the American ensemble – while their own dy- namic-testing "Said & Done" and "Need Ya Baby" are on par with the classics of yore when it comes to smoldering splash of emotions. It might be sluggish as in the slider-kissed "Dear Theo" or frenetic as in "Get It On," but there's nuclear power throughout that fuels "Preachin' Blues," which incorporates the pounding take on "Help," ignites another John Lennon cut, the bluesified "How Do You Sleep," later on, and gives way to "Slow Curve" from 2008's "On With The Show." Stil , the 10-minute "Never Know Why" gets too close to Black Sabbath to impress on re- cord, although the audience gives it a loud cheer, and there's a feeling that something's been lost in transition of the show onto an album. Thankful y, the over driven buzz of "Monster" blows such suspicion to pieces and "Gonna Need My Help" rams the message home. Full Tilt, indeed!
SuMMer 2014 eDITIOn 2 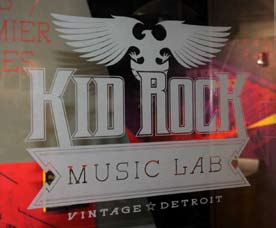 Bury ‘71 Leads rebirth of D. h. S.
In April of 2002, Bob Bury ‘71 joined the Detroit Historical Society as executive director and chief executive officer.
He is responsible for management and operations of the Detroit Historical Museum, Dossin Great Lakes Museum on Bel e Isle, and the Col ections Resource Center on the grounds of Historic Fort Wayne, as wel as development, member- ship, marketing, public relations, special event and volunteer activities. Most importantly, he is leading the rebirth of the Detroit Historical Society as it preserves Detroit's history for the education and enjoyment of future generations.
Let's start with the Detroit Histori-
tination to visit in Detroit?
wealthy people and they are who we cal Society. What is it? What is it In reality, the museum was a tier C
get individual donations from. responsible for?
player when we started, but now it's I saw the Kid Rock banner on my
The Detroit Historical Society has a tier A player in Detroit. That is way into the building. Is he one of
been around since 1921. We have a due to a complete renovation with all the donors?
long term agreement with the city of new attractions. Incremental change Yes he is. He donated $250,000 to Detroit that gives us responsibility just wasn't going to be a solution - a the museum and the cool part about for running the Detroit Historical complete overhaul was necessary. it is that he didn't have any editorial Museum, the Dossin Great Lakes We think we transformed the Detroit contributions or place stipulations Museum on Bel e Isle, and we house Historical Museum into something on it. He just believed in what we and preserve an amazing col ection we could al be proud of and inspired were doing and made the donation of rare and historic artifacts that are - it was a pure philanthropic gift. directly related to the city of Detroit. We named the music exhibit the Kid How were the renovations funded?
We also do a lot of community pro- Rock Music Lab. It is an interactive, Through fund-raising. We launched gramming focused on what I like to participatory space that explores the a past-forward campaign to raise the cal the "Big D" - the city, the sub- rich legacy of Detroit's music from funds. There are real y four op- urbs, the whole tri-county area. We gospel to Motown and al things in portunities for fund-raising for any have a very interactive, resource-rich between. We real y think the Kid nonprofit: government, foundations, web site, as wel . helps to usher in You spent nearly ten years working
and individuals. to renovate and update the D.H.M. Government
tion of Detroit's What was the main goal for the
For whatever reason - too academic, too geeky, too boring, etc. - there are we do not have You mentioned
a lot of people who would not dream here. Founda- the museum is
of going into a historical museum. more interactive.
So our goal was to broaden the base Can you expand
of interest. We did that by focusing institutions that on some local legends and contempo- were funded by The door to the Kid Rock Music Lab at I like to say that rary history. By focusing on the past wealthy indi- the Detroit Historical Museum. 100 years of what makes Detroit, De- viduals or cor- troit - music, sports, architecture, de- porations decades ago. They give out "hands-in." In the gal ery of in- sign, media - we were able to create a funds as their business. Corporate novations, there is an opportunity new, interactive historical experience sponsorships come from corporations for visitors to solve a problem using that we think everyone wil enjoy. It like General motors, other auto sup- computer based technology, cre- is now one of the top destinations to pliers, PNC Bank, who make phil- ate their own song in the Kid Rock visit in Detroit. anthropic donations as part of their Music Lab, and create a new flavor of service to the community. The De- What makes the museum a top des-
Faygo using technology. The "hands- troit area has thousands of very, very 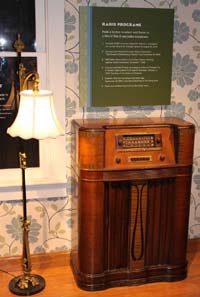