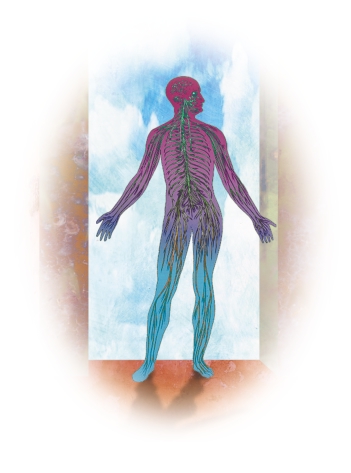 A Conceptual A Conceptual Model of Pain: Part three of this series discusses the choice of treatment approaches depending on the diagnosed source(s) of pain.
by James Woessner, MD, PhD In part one of this series,1the author de- becomes active (i.e. nociceptive pain may involvement from a herniated disc or scribed a conceptual model of pain based progress to neuropathic pain and then to other physical or chemical pathology at on electrical principles: sensors (free nerve central pain), the physician can address the nerve root exit from the spinal canal.3 endings), wires (axons/nerves) and the percep- one mechanism at a time by choosing While these distributions are usually un- tron (spinal cord and brain). Pain was de- treatment methods that are logically most ambiguous, specific mapping of the sen- scribed as either nociceptive (normal function- effective and logistically most convenient.
sory distributions of thoracic dermatomes ing of pain fibers), neuropathic (misfiring of Patient perception of treatment "reason- and the anatomic locations of the inner- axons/nerves), or central dysfunctions (central ableness" also plays a role in the initial vating nerves clearly show overlapping nervous system), the latter includes the pain treatment adopted.
and highly individualized patterns.
pathways in the spinal cord and the brain. Part Sclerotomal pain is deep bone pain re- two of this series discussed methods to measure Pain Patterns Related to
ferred from specific vertebral segments and quantify functioning of the pain nerve that may be interpreted as non-physio- pathways with a view to understanding the un- Having pathology is not the same as hav- logical. Bone pain may be either local or derlying pathology causing the pain.2 ing pain from that pathology. Without vis- referred from ipsilateral spinal segments.3 ible tissue changes, there may not be a pe- Pain referred from tendinous and/or ripheral pain generator, leaving neuro- ligamentous interfaces with bone surfaces The concept that pain results from me- pathic and/or central pain as the proba- has no specific name that may also be in- chanically- and chemically-caused physical ble cause. There could also be a micro- terpreted as non-physiological. Hackett4 changes that become more and more dif- scopic pathology and/or local metabolic mapped pain referred from ligamentous ficult to reverse is well-accepted through- reason. Ultimately, there must always be and tendon attachments to bones.
out Medicine. With the passage of time, the a mechanism whereby some pathology or Drs. Travel and Simons5,6 have provid- reasons for the pain also become multi-fac- dysfunction causes the perception of pain.
ed physicians and patients with detailed torial and overlapping, as well as more dif- There are, however, a multitude of pain- maps of referred pain patterns from my- ficult to cure. Thus, early treatment is bet- pathology referral patterns. Most physi- ofasical trigger points. While individual ter to avoid permanent physiologic and cians only recognize dermatomal pat- variations certainly occur, in general, structural changes and facilitate a cure.
terns; there are also sclerotomal, myofas- these patterns of referred pain can be rec- While the pain mechanism(s) may be- cial, viscerotomal, thermatomal, my- ognized in physician practice, and may come more complicated over time,1,2 as otomal, as well as other referral patterns.
sometimes be incorrectly referred to as more than one of the basic mechanisms Dermatomal pain suggests nerve root "non-physiologic" pain patterns.
Practical PAIN MANAGEMENT, Jan/Feb 2003 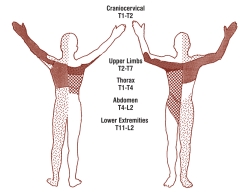