J Mol ModelDOI 10.1007/s00894-010-0698-4 Investigating reaction pathways in rare events simulationsof antibiotics diffusion through protein channels Eric Hajjar & Amit Kumar & Paolo Ruggerone &Matteo Ceccarelli Received: 1 December 2009 / Accepted: 27 February 2010 # Springer-Verlag 2010 Abstract In Gram-negative bacteria, outer-membrane pro- further simulations. This will benefit the screening and design tein channels, such as OmpF of Escherichia coli, constitute for antibiotics with better permeation properties.
the entry point of various classes of antibiotics. Whileantibacterial research and development is declining, bacterial Keywords Accelerated molecular dynamics . Antibacterial resistance to antibiotics is rising and there is an emergency design . Antibiotics uptake . Bacterial porins . Diffusion .
call for a new way to develop potent antibacterial agents and Free energy . Reaction coordinate to bring them to the market faster and at reduced cost. Anemerging strategy is to follow a bottom-up approach based onmicroscopically founded computational based screening, however such strategy needs better-tuned methods. Here wepropose to use molecular dynamics (MD) simulations The permeability to antibiotics, or uptake, is the very first combined with the metadynamics algorithm, to study line of defense of Gram-negative bacteria, that are antibiotic translocation through OmpF at a molecular scale.
protected by an outer-membrane []. In the case of E.coli, This recently designed algorithm overcomes the time scale the uptake of several classes of β-lactam antibiotics, a problem of classical MD by accelerating some reaction prominent group in our current antibacterial arsenal, is coordinates. It is expected that the initial assumption of the largely controlled by general diffusion protein channels reaction coordinates is a key determinant for the efficiency such as outer membrane protein F (OmpF) [Indeed, and accuracy of the simulations. Previous studies using pathogenic strains of Gram-negative bacteria, that were different computational schemes for a similar process only found to be resistant against quinolones and β-lactams used one reaction coordinate, which is the directionality. Here (two of the main classes of antibiotics) frequently have we go further and see how it is possible to include more modulation of the structure or the expression of general informative reaction coordinates, accounting explicitly for: diffusion porin OmpF (i) the antibiotic flexibility and (ii) interactions with the A key feature in the structure of porins, as seen from the channel. As model systems, we select two compounds X-ray structure of OmpF is the presence of the loop L3 covering the main classes of antibiotics, ampicillin and that folds back into the channel to form a gate, also called moxifloxacine. We decipher the molecular mechanism of constriction region (see Fig. In addition to such spatial translocation of each antibiotic and highlight the important constriction, the zone is also characterized by a strong parameters that should be taken into account for improving transversal electric field, generated by negatively chargedresidues D113, E117 (L3 side) that faces a cluster ofpositively charged residues R42, R82, and R132 (anti-L3 E. Hajjar (*) : A. Kumar : P. Ruggerone : M. Ceccarelli side) (see Fig. ).
Department of Physics and UOS-SLACS, While antibacterial research and development is on the Universita di Cagliari and Istituto Officina dei Materiali/CNR, decline, the resistance is on the rise, and we are thus facing SP Monserrato-Sestu Km 0.700, an alarming situation where there is an emergency call for a I-09042 Monserrato, Italye-mail: [email protected] new way to develop potent antibacterial agents and to bring 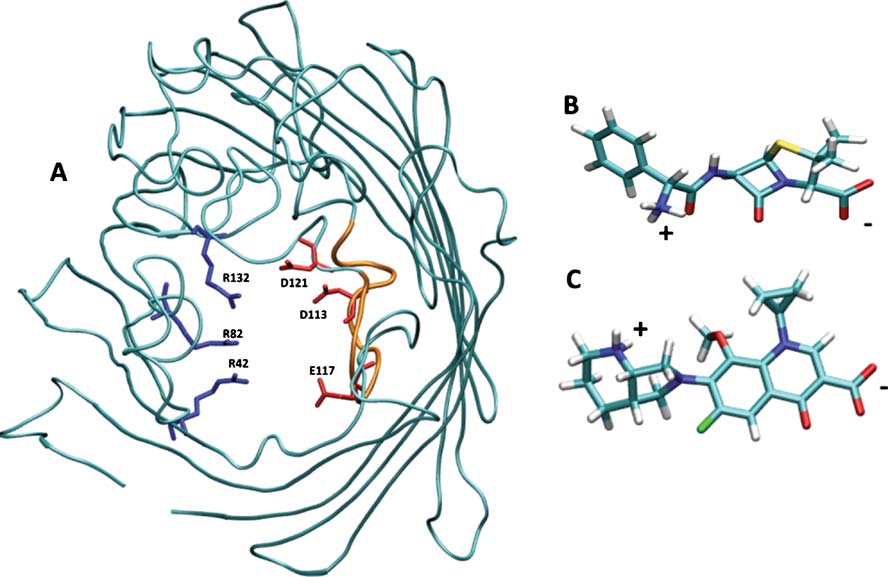 energy after obtaining the first translocation path, which is Further, we report the molecular properties in terms of considered to be the most probable path because it passes the amount of hydrophilic/hydrophobic surface, as calcu- through the lowest saddle point, as done before for the lated from the PLATINIUM server ].
unthreading of a molecule ]. In fact, once the antibioticcrosses the constriction region, we expected a diffusiveregime, with no significant affinity sites. The error bars Results and discussion associated with the energy calculations were assessed aspreviously done [and are of 1 kcal mol−1 at most.
Metadynamics simulations allow studyingthe translocation process Microscopic analysis methodology Both ampicillin and moxifloxacine have a permanentdipole, being its larger component along their long axis To decipher the molecular details of the translocation (Fig. b–c). As during permeation, antibiotics have to mechanism additional equilibrium MD simulations (1 ns penetrate the constriction region that is rich of charged length) were started from each visited minima along the amino acids, it is important to accurately define the way of diffusion path. In depth analysis using VMD and in-house entry and the interactions with the channel. To do so, we scripts, was performed to characterize the following key included explicitly these degrees of freedom as reaction structural features: coordinate along the metadynamics runs.
(i) The atomic root mean square fluctuations (rmsf) were The Fig. displays the free energy surfaces (FES) of the calculated for each heavy atoms of the backbone of the translocation of the ampicillin beta-lactam antibiotic (Amp) antibiotic with respect to its average position during the through the OmpF channel for two different choices of the reaction coordinates: (A) with the combination of the (ii) Existence of hydrogen bonds (Hb) and hydrophobic distance Z and the number of hydrogen bonds Hb; and contacts (Hc) between atoms of the antibiotics and of (B) with the combination of the distance Z and the angle Θ.
OmpF. Hbs are counted using VMD scripts according Interestingly, the free energy barrier required for ampicillin to the following threshold parameters: a distance of at to translocates is of the same order in the two simulations: most 3 Å and donor-hydrogen-acceptor angle of at 11 kcal mol−1 and 9 kcal mol−1 for the simulation A and B least 130 degrees. Hcs are counted when non-polar respectively (the values correspond to the energy barrier atoms are separated by at most 3 Å.
needed to translocates starting from the deepest minima Fig. 2 Complete free energy surfaces for ampicillin translocating and the number of Hb; (B) the distance Z and the angle Θ. Each isoline through OmpF, associated with the reaction pathway along the subspace correspond to a different color gradient and to 1 kcal mol−1. The blue of the two variables: taken as (A) the distance Z (Z=0 corresponds to points superimposed on the FES correspond to the superimposed values the center of the constriction zone, also indicated by the gray shading) of the RC calculated from the other simulation 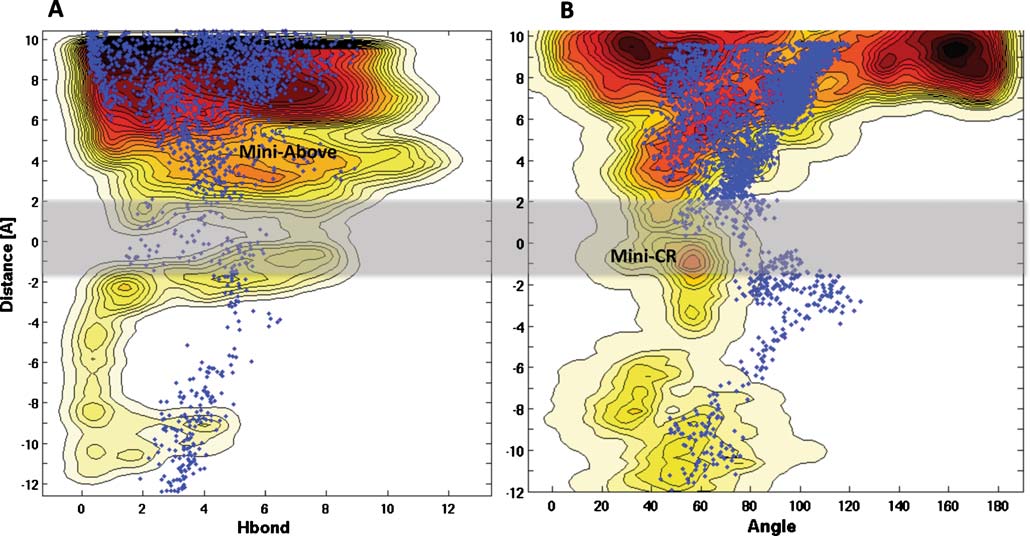 120 degrees in the case of the simulation A, whereas they explained in the Method section). We observe that can cover fully the range from 0 to 180 in the case of ampicillin is able to make a large number of durable polar simulation B), as a consequence some local minima (above Hbs, in particular both the one between its N-terminal the constriction region) are not sampled in the path positive group (N1) and D113 and the one between its C- followed by the simulation A (Fig. ).
terminal carboxylic group (O2) and R132 exceed 70% of To elucidate the microscopic details of the different the equilibrium simulation time. Instead, only one signifi- translocation path and conclude on the importance of the cant Hc (∼20% of the simulation time) is made between the choice of the RC we further performed in-depth analysis CT2 carbon of ampicillin and M114 (Fig. based on equilibrium simulations.
A similar detailed structural analysis was performed when moxifloxacine is bound in Mini-CR, in the simulation Equilibrium MD simulations allow studying the structural B (with the Θ RC), and we find that in this case, the and dynamics properties antibiotic is oriented with its polar carboxyl group pointingup (Fig. ). Instead, it is with its hydrophobic group that In order to characterize the structural and dynamics moxifloxacine is seen to penetrate the constriction region properties that govern the antibiotics diffusion process we (Fig. ). The interaction network analysis indeed reveals a then performed equilibrium MD simulations (of 1 ns predominance of Hcontacts between the antibiotic and the length) starting from the relevant, preferential minima, many hydrophobic residues on the porin side such as F118, identified by the FES. We focus only on the minima where L20, M114, P116 (Fig. The only significant Hb the antibiotics are bound at the constriction region of the identified involves Y124, E117 and to a lesser extend R82.
channel (Mini-CR) as if such interaction was the rate- Differences in the structural, dynamical or physico- limiting step of the process. In the case of ampicillin, we chemical properties of the two antibiotics could explain find that very similar structures are sampled along the two the differences observed in our study - that is, the translocation Mini-CR from both simulations with the Hb and Θ RC, we of ampicillin is described equivalently by both the Hb and the will further only describe the Mini-CR of the simulation B Θ RC while the translocation process of moxifloxacine differs (with the Θ RC). As seen from the snapshot in Fig. , to if choosing the Hb or the Θ RC. Table reports diverse enter the affinity site at the constriction region (Mini-CR) physico-chemical properties of the two antibiotics, such as and further translocates, ampicillin is oriented with its polar the flexibility and solvation pattern, obtained from the carboxyl group pointing down and makes favorable optimized 3D structures or from simulations where they are interactions with the residues of the porin constriction placed in a box of water. We observe that, although both zone. We present in Fig. the lifetime of the hydrogen antibiotics have the same molecular surface size, ampicillin bonds and hydrophobic contact (Hc) interactions between is found to be much more polar while moxifloxacine is much ampicillin and OmpF atoms sampled along Mini-CR (as more hydrophobic (see computed surface properties in Fig. 4 a) Molecular detail of ampicillin at the preferred minimum, at the constriction region (Mini-CR). In the x-axis is represented each the constriction region, Mini-CR, showing the interacting residues of atom of the antibiotic, in y-axis is calculated the lifetime (probability OmpF (colored by residue types, the ones involved in Hbs are of existence along simulation) of each interaction between atoms of displayed as sticks and those involved in Hcontacts are displayed by the antibiotic and atoms of OmpF. In black bars are represented the molecular surface) (see Fig. for coloring code). b) Interaction map hydrogen bonds (Hb) and in gray bars the hydrophobic contacts for the equilibrium MD of ampicillin in the preferential minimum, at (Hcontacts), calculated as explained in

Translating cell biology intotherapeutic advancesin Alzheimer's diseaseDennis J. Selkoe Studies of the molecular basis of Alzheimer's disease exemplify the increasingly blurred distinction between basic andapplied biomedical research. The four genes so far implicated in familial Alzheimer's disease have each been shown toelevate brain levels of the self-aggregating amyloid-b protein, leading gradually to profound neuronal and glialalteration, synaptic loss and dementia. Progress in understanding this cascade has helped to identify specifictherapeutic targets and provides a model for elucidating other neurodegenerative disorders.