Journal of General Virology (2011), 92, 1172–1183 Reassortant low-pathogenic avian influenza H5N2viruses in African wild birds Chantal J. Snoeck,13 Adeniyi T. Adeyanju,23 Se´bastien De Landtsheer,1Ulf Ottosson,2,3 Shiiwua Manu,2 Ward Hagemeijer,4 Taej Mundkur4and Claude P. Muller1 1Institute of Immunology, CRP-Sante´ and Laboratoire National de Sante´, Luxembourg 2A. P. Leventis Ornithological Research Institute, University of Jos, Jos, Plateau State, Nigeria 3Ottenby Bird Observatory, Degerhamn, Sweden 4Wetlands International, Wageningen, The Netherlands To investigate the presence and persistence of avian influenza virus in African birds, we monitoredavian influenza in wild and domestic birds in two different regions in Nigeria. We found low-pathogenic avian influenza (LPAI) H5N2 viruses in three spur-winged geese (Plectropterusgambensis) in the Hadejia–Nguru wetlands. Phylogenetic analyses revealed that all of the genes,except the non-structural (NS) genes, of the LPAI H5N2 viruses were more closely related togenes recently found in wild and domestic birds in Europe. The NS genes formed a sister group toSouth African and Zambian NS genes. This suggested that the Nigerian LPAI H5N2 viruses foundin wild birds were reassortants exhibiting an NS gene that circulated for at least 7 years in Africanbirds and is part of the African influenza gene pool, and genes that were more recently introducedinto Africa from Eurasia, most probably by intercontinental migratory birds. Interestingly thehaemagglutinin and neuraminidase genes formed a sister branch to highly pathogenic avianinfluenza (HPAI) H5N2 strains found in the same wild bird species in the same wetland only1 year earlier. However, they were not the closest known relatives of each other, suggesting thattheir presence in the wetland resulted from two separate introductions. The presence of LPAIH5N2 in wild birds in the Hadejia–Nguru wetlands, where wild birds and poultry occasionally mix, Received 13 December 2010 provides ample opportunity for infection across species boundaries, with the potential risk of Accepted 18 January 2011 generating HPAI viruses after extensive circulation in poultry.
supports efficient short-range virus transmission of LPAIviruses by the faecal–oral route Wild birds, in particular of the orders Charadriiformes and High densities of mixed bird populations at Anseriformes, are considered natural asymptomatic reser- stopovers and non-breeding sites also promote intra- and voirs of low pathogenic avian influenza (LPAI) virus interspecies virus transmission ).
and the source ofinfluenza viruses in other species including poultry Wetlands in Africa are preferred non-breeding sites for All subtypes (H1–16 and N1–9) of many Eurasian migratory waterbirds. Although Eurasian avian influenza have been found in wild birds species can mix with resident African birds or intra-African Migration after the migrants in many important bird areas ; breeding season along distinct flyways contributes to long- ), only a few avian influenza viruses (AIV) have distance dissemination of influenza viruses been reported from Africa before 2006 ( and the aquatic environment of waterfowl 3These authors contributed equally to this paper.
The first seroprevalence study insub-Saharan Africa, conducted in commercial poultry in The GenBank/EMBL/DDBJ accession numbers for the nucleotide Nigeria between 1999 and 2004, did not detect antibodies to sequences reported in this paper are FR771823–FR771846.
influenza viruses In a first wild-bird Colour versions of Figs 1 and 2, showing phylogenies of the H5 and NS surveillance effort, a wide variety of LPAI viruses were genes, and six supplementary figures showing phylogenies of the NA,PA, PB1, PB2, matrix and NP genes are available with the online version identified in migratory waterbirds of this paper.
Interest in AIV in wild birds in Africa further increased in 029728 G 2011 SGM Printed in Great Britain LPAI H5N2 viruses in Nigerian wild birds 2006 when highly pathogenic avian influenza (HPAI) H5N1 the common teal (Anas crecca) from Egypt is not known virus was first identified in Africa in Nigerian poultry farms (After the independent introduction ofthree sublineages of clade 2.2 viruses into poultry, HPAI In this study, we investigated the presence of avian H5N1 viruses have undergone multiple reassortments and influenza in wild and domestic birds in two different reassorted viruses have largely replaced the initial sub- locations in Nigeria in 2008. The Dagona wildlife sanctuary lineages The route of introduction of is a protected area within the Hadejia–Nguru wetlands, H5N1 is unknown and both migratory birds and poultry located in north-eastern Nigeria, and is part of the Chad trade might be suspected Basin national park. Large numbers of migratory birds mix Although efforts to isolate influenza viruses with local wild birds in the Hadejia–Nguru wetlands. The from wild birds in Africa intensified, few met with success Hadejia–Nguru wetlands are also the most important bird area in the region, from which the first HPAI H5N1 probably been infected by scavenging H5N1-infected outbreak in Africa was reported. The Amurum Forest poultry but the infection route of reserve is also a protected area located 15 km north-east of Table 1. List of sampled domestic and wild bird species (order and family) in Dagona wildlife sanctuary and in the Amurum forestreserve and villages around Jos, Nigeria in 2008 For each family, the number of samples from domestic birds is given in parentheses.
Dagona wildlife sanctuary Amurum Forest reserve and villages around Jos No. species per family No. samples per family No. species per family No. samples per family 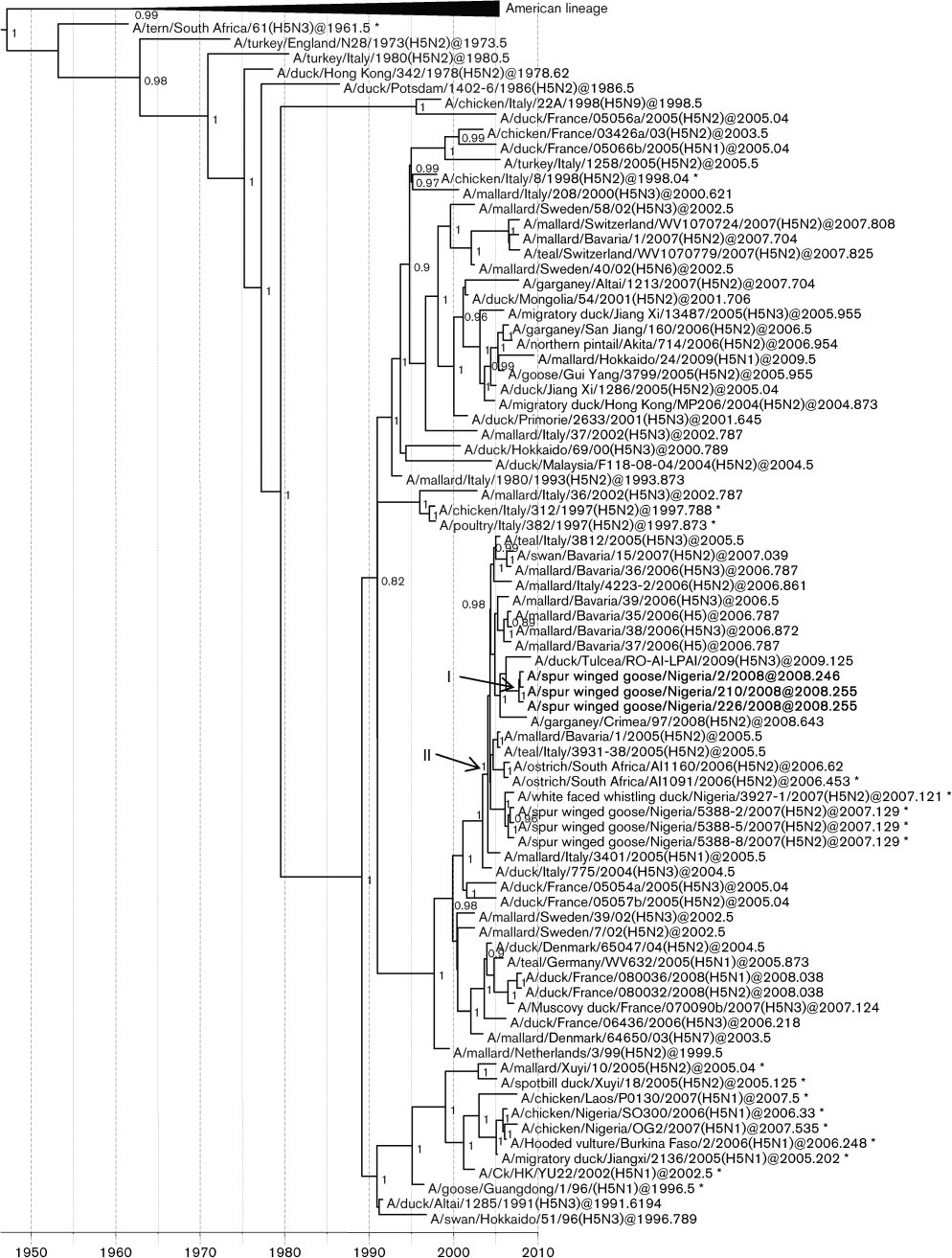 C. J. Snoeck and others Journal of General Virology 92 LPAI H5N2 viruses in Nigerian wild birds Fig. 1. Dated phylogeny of H5 genes. The horizontal axis represents calendar years and nodes correspond to mean TMRCAs.
Posterior probability values .0.75 are shown. Representative strains from Africa, Europe and Asia are included. Virus strainscharacterized in this study are shown in boldface type. *, HPAI strains. Node I represents the mean TMRCAs of the LPAI H5N2cluster. Node II corresponds to the most recent common ancestor of the Nigerian LPAI and HPAI supported by a high posteriorprobability value.
Jos (Plateau State), very close to the urban community mammals [PB2 627E, 701D, 714S, PB1 678S, PA 615K and ). We did not find any HPAI H5N1 virus, NP 319N (] or drug resistance [M2 26L, but did find LPAI H5N2 strains that contained genes from 27V, 30A, 31S and 34G NA 119E ( the Eurasian gene pool and a non-structural (NS) gene that was most closely related to other African viruses.
294N ] was found.
Interestingly the haemagglutinin (HA) genes were part ofa cluster that also contained HA genes from HPAI H5N2 Phylogenetic analyses of the eight genes reveal a viruses found in the same bird species and in the same separate origin for the NS gene region 1 year earlier.
To explore the evolutionary origin and the time ofintroduction of LPAI H5N2 to Nigeria, tree topologies were assessed and times to the most recent common ancestor(TMRCAs) were estimated using BEAST version 1.5.3. For Avian influenza prevalence is low each gene, the three LPAI H5N2 viruses were geneticallyhighly similar (Kimura distance from 0 to 0.9 %) and always A total of 1024 samples were collected in the Dagona clustered together (100 % posterior probabilities for all wildlife sanctuary from 44 wild bird species, including genes), suggesting that the three strains recently evolved waterfowl, waders and passerines, and from 373 domestic from a common ancestor and resulted from a single poultry such as chickens, ducks and geese introduction event in the Nigerian wetlands. All of the genes Around Jos, cloacal samples were collected from 374 belonged to the Eurasian and not the American lineage, but domestic birds (362 chickens, 5 ducks and 7 turkeys). In none of them were related to HPAI H5N1 strains from addition 154 wild birds corresponding to 52 species, Nigeria, from other parts of Africa or from Eurasia.
mainly passerines, were sampled in the Amurum Forestreserve Only three fresh faecal samples collected Phylogenetic analyses of the HA gene revealed that the from spur-winged geese (Plectropterus gambensis) in a LPAI H5N2 viruses were most closely related to a EuropeanH5N3 isolate (A/duck/Tulcea/RO-AI-LPAI/2009) recently found in a sentinel duck in Romania The NA (12u44.676 N, 10u40.001 E) were influenza A positive.
genes of the LPAI H5N2 viruses were most closely related They were collected on 31 March 2008 (A/spur-winged to an H2N2 strain from the Netherlands (A/mallard/ goose/Nigeria/2/2008) and on 3 April 2008 (A/spur-winged Netherlands/14/2007) (Supplementary Fig. S1, available in goose/Nigeria/210/2008 and A/spur-winged goose/Nigeria/ JGV Online). The LPAI H5N2 viruses formed a sister clade 226/2008). Thus, in our study, the prevalence of AIV in the to strains recently isolated from wild birds in Europe (HA Dagona wildlife sanctuary was 0.3 % (3/1024). All samples and NA genes) and Asia (NA gene). Interestingly they also collected in Plateau State were influenza A negative.
formed a sister branch with highly pathogenic H5N2strains that had been isolated one year earlier in a similar Molecular analyses show no marker of virulence location (10 km away) from the same wild bird species(HA and NA genes). In the same HA cluster, closely related Genotype-specific PCRs were positive for H5 and N2 for the HPAI and LPAI H5N2 viruses, both from South African three viruses and all of the genes were sequenced using ostriches (A/ostrich/South Africa/AI1160/2006, LPAI; and previously published or newly designed primers. Analyses of the HA gene showed that the predicted amino acid sequence another sister branch to the Nigerian LPAI H5N2 viruses.
of the cleavage site of the three viruses corresponded to a low However, all African isolates did not share a direct pathogenic pathotype (PQRETR*GLF). They had a gluta- common ancestor, suggesting that they did not directly mine at position 226 and a glycine at position 228 evolve from each other. The TMRCAs of the LPAI H5N2 (numbering for the H3 subtype) indicating a higher binding HA and NA genes ranged from February 2007 to March affinity for sialic acid a2,3, which is characteristic of avian 2008 (95 % highest posterior density interval, HPD) and cell-surface receptors ( October 2006 to March 2008 (95 % HPD), respectively.
No stalk deletion in the neuraminidase (NA) gene,nor additional predicted glycosylation sites, both proposed The influenza virus PA polymerase subunit (PA) gene of to be associated with poultry adaptation, were detected the LPAI H5N2 viruses formed a sister clade with PA genes from a goose and wild and captive ducks from France, the genetic marker associated with increased virulence in Netherlands and Sweden (Supplementary Fig. S2, available 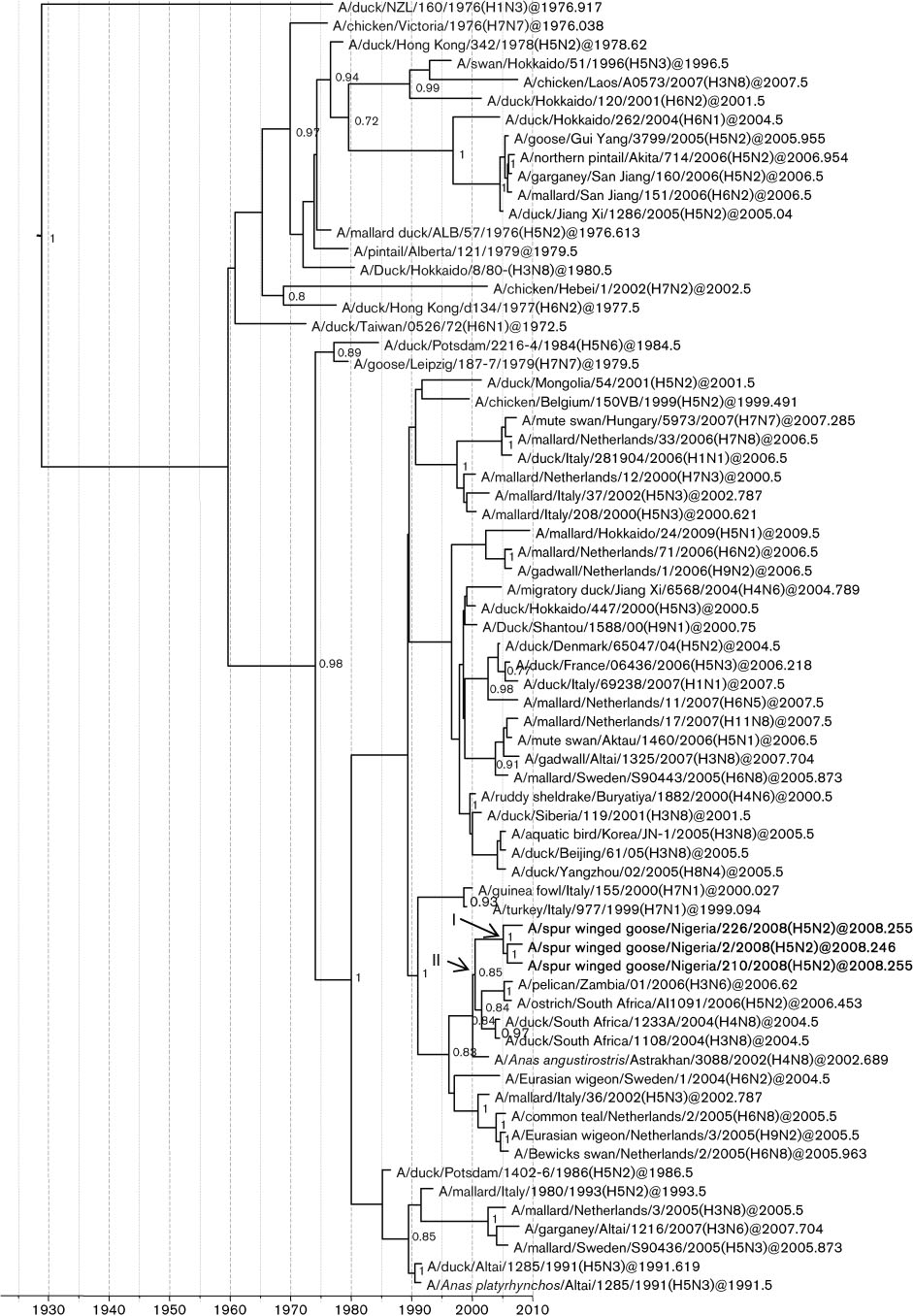