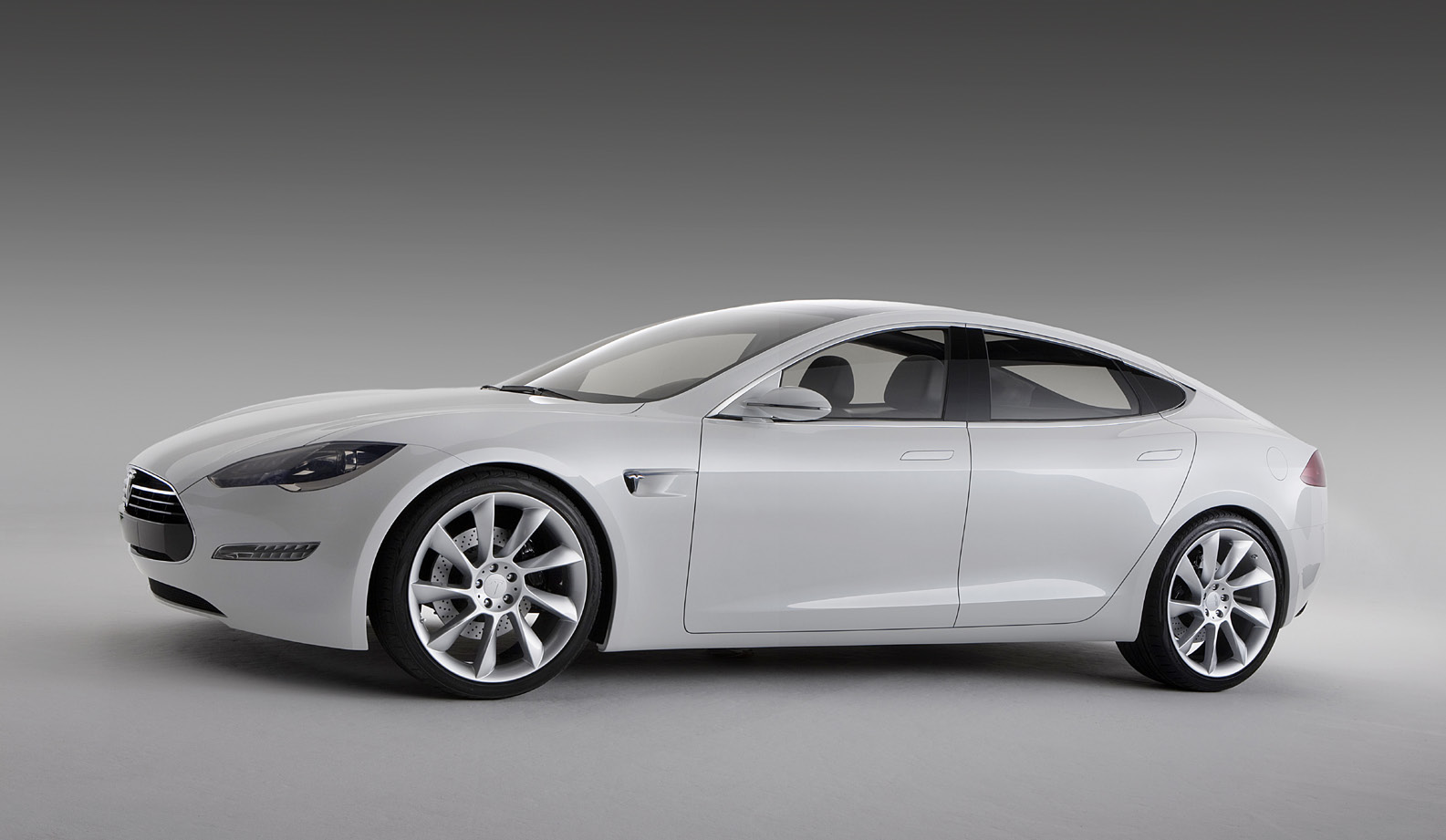 Electric dreams come true.
Customer Success Story Tesla Motors reinvents the electric car Autodesk® Alias® Surface
Autodesk® Showcase®
with help from Autodesk® software.
Autodesk Alias Surface deliver incredibly high- quality designs in very short periods of time. Having people who are experienced with such proven software meant we could meet extremely aggressive timelines. —Paul Lomangino Engineering Tools Manager Image courtesy of Tesla Motors
Powered by more than 7,000 lithium-ion batteries, Once upon a time, the electric car was missing and the Model S sheds such standard equipment as the presumed dead. A documentary film was even made internal combustion engine, exhaust pipes, thermal detailing the technology's demise while lamenting shielding against engine heat, and catalytic convert- its passing. Fortunately, however, the rumors were ers. The resulting extra space provides room for five vastly exaggerated. adults together with two children, or a surfboard, a 50-inch television, and a mountain bike.
While all manner of more environmental y conscious vehicles have been produced and discussed in re- cent years—from popular gas-electric hybrids to hy- "The Model S is real y about creating a beautiful, drogen fuel cel s to biodiesel—the resulting vehicles eﬃcient product with no compromises," explains have typical y lacked the speed, styling, and storage Franz von Holzhausen, chief designer at Tesla. "This space necessary to attract significant numbers of is not a slower, less-attractive car that compensates driving consumers. And while hybrid technologies by being better for the environment. The Model S is improve the eﬃciency of the internal combustion a desirable-looking, supremely functional, and very engine, they tend to compromise performance for fast sedan. Oh, and it also happens to be the green- eﬃciency and sustainability.
est car on the planet." That all changes with Tesla Motors, which is using The benefits of electric vehicles are many. The most Autodesk® Alias® Surface software to turn heads obvious is that electricity trumps oil in almost every and change minds. First prototyped in 2006, the way imaginable. It can be generated in a variety of Tesla Roadster is the world's first electric supercar. ways, including hydroelectric dams, wind farms, and It hits 60 mph in under four seconds, travels up to solar arrays. What's more, the driveshaft, exhaust 245 miles on a single charge, and does it all without pipes, and other bulky equipment running along the any tailpipe emissions, and with far less noise and bottom of the car—all of which make for more noise vibration than traditional cars.
and vibration, and reduced stiﬀness—are replaced by rechargeable lithium-ion batteries. The quiet, yet The Tesla Motors' vision, however, goes far beyond high-performance comfort of the Model S derives a need for clean speed. With the more functional in part from its perfectly flat bottom. And just for The Autodesk Clean Tech Partner Program and aﬀordable Tesla Model S sedan, the company good measure, the batteries that power the car are supports early-stage clean technology is intent on nothing less than moving the world to bolted into a 9-inch box on the floor of the car, mak- companies with design and engineering electric transportation. While gasoline-powered ing it stiﬀer stil . software they can use to accelerate their cars rely on a single, dwindling resource and grow development of solutions to the world's most increasingly ineﬃcient as they age, electric cars pressing environmental chal enges. For more promise to grow more eﬃcient as the years pass, especial y as more sustainable methods of powering the grid are developed. 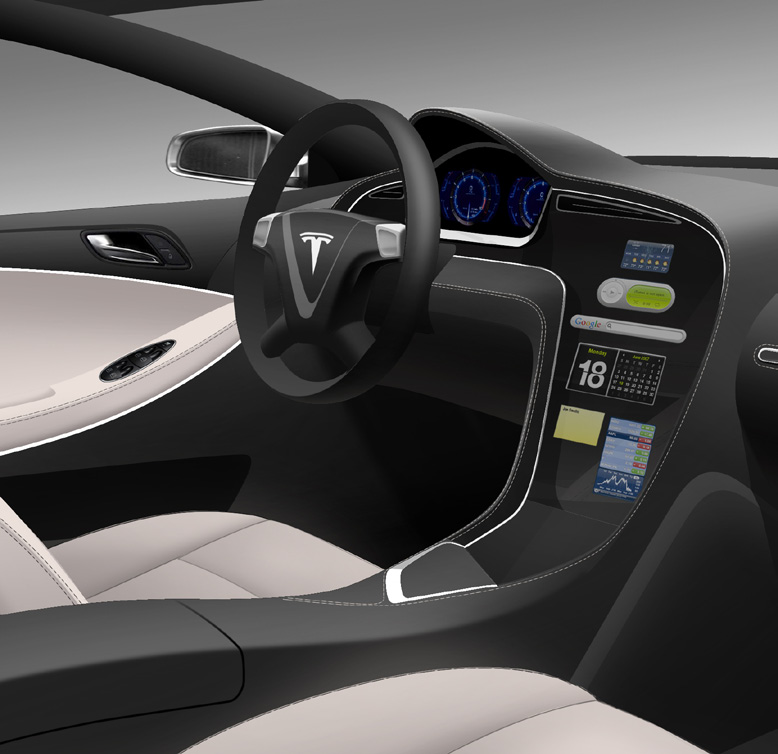 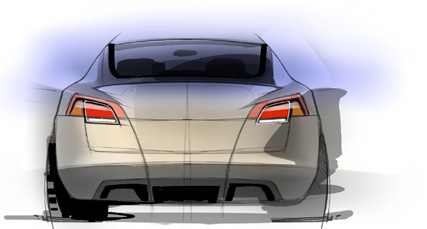 Of course, the most revolutionary ideas can often The team uses a combination of rapid prototypes be the most diﬃcult to design, and Tesla designers designed in Alias and computer numerical con- soon found that they would have to strike a balance trol ed (CNC) mil ed clay models to perfect designs. between beautiful, yet familiar styling and industry-changing, yet recognizable technology. "Many of our best Alias modelers are guys who used to be clay modelers," says von Holzhausen. "We do "With the Roadster, we had pretty much proven that an iterative process in which we create models in the technology could work," says Paul Lomangino, Alias, then mill the data in clay and fine-tune it by engineering tools manager at Tesla. "People typical- hand. We'll then scan the clay model and bring it ly thought of electric cars as slow and unattractive. back into Alias for more polish, then mill it again. What we had to do was change that perception. We Alias is great for visualization and rapid prototyping, wanted people to be confident that this electric car and it is as close as you can get to a physical pro- would be fast, enjoyable, and functional, and would totype. Alias has streamlined our eﬀorts and made Images courtesy of Tesla Motors
take away problems rather than create new ones. At getting to 3D incredibly quick." the same time, we didn't want to overwhelm them with too many changes. The Model S is still meant to "Autodesk Alias Surface helped our team deliver be fun and exciting, but it is also meant to broaden incredibly high-quality designs in very short periods Just as the Model S promises to take the sleek the audience through increased functionality and of time," Lomangino agrees. "Having people who styling and high performance of the Roadster to a are experienced with such proven software meant broader audience, there is no doubt that Tesla has we could meet extremely aggressive timelines." plans for more varied and more aﬀordable electric The result is a lean, powerful car that is also fun cars. As customers grow more comfortable with the for—and can accommodate—the whole family.
The Results
concept of uncompromising electric transportation, While the exterior of the Model S is designed to increasingly eﬃcient and avant-garde design options "We intentional y maintained a lot of the traditional attract discerning drivers, the interior prepares will be integrated, all with the help of Autodesk automotive shape and cues in our exterior design," them for a new driving experience. At the car's focal software. The company is currently incorporating says von Holzhausen. "It was crucial to establish center is a state-of-the-art, 17-inch touch screen, Autodesk® Showcase® visualization software into the positive qualities of the design while building placing all of the car's functions, except steering and its pipeline. customer confidence, and we had to do it quickly." acceleration, at the driver's fingertips. Von Holzhausen is very bul ish on the future: "This The Solution
"As much as we wanted to show oﬀ our revolution- is real y a whole new experience for drivers. We're The company's design and engineering process was ary power train, we also wanted to give the car awe- confident that after just a few minutes in the Model significantly streamlined through the use of Alias some technological prowess," says von Holzhausen. S, drivers will be wondering why all cars aren't elec- Surface: "Autodesk Alias Surface software is the "We started thinking about an interactive, updat- tric and, more than that, why their cars don't have a best automotive design tool, bar none," says von able, continual y relevant interface, much like the 17-inch touch screen. We couldn't have done all that Holzhausen. "There is simply no other tool that smart phones and laptops we all now use. With this without help from Autodesk software." comes close to Alias for visualization, rendering, large screen, drivers can extend the relevancy of surfacing, or just drawing. I use Alias to draft lines their ownership experience by changing features rather than using pen and paper, and also to replace and apps in the car. Go to the Tesla app store and the traditional tape drawings. I don't know what I'd download a new skin, and your car is fresh again." Autodesk Alias Surface software is the best automotive design tool, bar none. There is simply no other tool that comes close to Alias for visualization, rendering, surfacing, or just drawing…. I don't know what I'd do without it.
—Franz von Holzhausen Image courtesy of Tesla Motors
Autodesk, Alias, and Showcase are registered trademarks or trademarks of Autodesk, Inc., and/or its subsidiaries and/or aﬃliates in the USA and/or other countries. All other brand names, product names, or trademarks belong to their respective holders. Autodesk reserves the right to alter product and services oﬀerings, and specifications and pricing at any time without notice, and is not responsible for typographical or graphical errors that may appear in this document. 2011 Autodesk, Inc. All rights reserved.