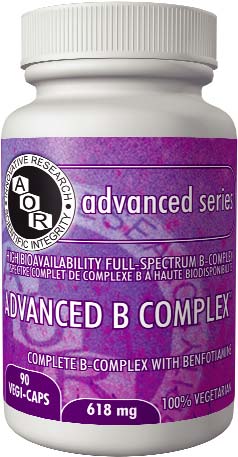 Advanced B ComplexTM
The Best Mix
of B Vitamins
90 Vegi-Caps
• Prevents age-related collagen degeneration
3 Capsules
B1 (Benfotiamine) • Maintains cellular energy production
B2 (Riboflavin-5-phosphate) (Niacin - from Inositol Hexanicotinate) • Supports the function of the brain and nervous system
B6 (Pyridoxal-5-phosphate) B12 (Methylcobalamin) • Contains the most effective forms of B vitamins
(5-methyltetrahydrofolate)Biotin 500 Choline (Bitartrate) (from Inositol, Inositol Hexanicotinate) The B complex is a group of essential vitamins with important roles in the body.
Benfotiamine (a bioavailable form of vitamin B1) helps prevent high blood The most bioavailable forms of the B- sugar. Riboflavin (B2) has an important role in energy metabolism. Niacin (B3) vitamins (like P5P and benfotiamine) ateffective dosages.
is the base of NAD and NADH, important coenzymes that are required in cellular respiration and energy production pathways. Coenzyme A is also a critical factor in these pathways, and its production depends on pantothenic Type 1 and Type 2 Diabetes acid (B5). P5P (B6) is required in many biological pathways, including amino Vitamin B Deficiency acid metabolism and neurotransmitter formation. Methylcobalamin (B12) is important in the central nervous system. Benfotiamine and P5P help prevent the Cautions:
At extremely high doses, vitamin B6 has
formation of advanced glycation end products which lead to age-related been found to cause nerve damage. The degeneration. Folic acid (5-methyltetrahydrofolate) is needed for red blood cell Institute of Medicine has established a noadverse effects level (NOAEL) of 200 mg of and DNA formation and is essential during pregnancy.
Vitamin B6 per day, and a safe upper limit(UL) of 100mg per day. Do not exceed The Costs of Deficiency
these limits from all vitamin B6supplements (pyridoxine and Pyridox-amine) combined. Discontinue vitamin B6 The importance of these vitamins is illustrated by the detrimental health effects supplementation and consult a physician that occur when they are deficient. B1 deficiency has been linked to type 2 immediately if you experienceneurological symptoms such as numbness, diabetes. B12 deficiency leads to neurological disorders and anemia. P5P burning, pain, pricking, or tingling in your deficiency is associated with depression and neuropathy. Folic acid deficiency is fingers or feet, or unusual clumsiness.
Persons taking many drugs - including 5- associated with anemia and neural tube defects in infants. fluorouracil, hydralazine, levodopa,nortriptyline, phenytoin, and tetracycline-should not take high dose vitamin B6 Vitamins in Forms your Body can Use
supplements.
Pregnancy / Nursing: Safe at 1
B vitamins are essential, and it is important to get the right amount in the right capsule per day.
forms. Advanced B Complex delivers the biologically active and most efficient forms of these vitamins.
R+Lipoic Acid Sustained Release,BenaGene Orthomolecular Research
& Scientific Integrity
AOR 9 - 4101 19th Street NE, Calgary, Alberta T2E 6X8 Canada

Advanced B ComplexTM
The B-complex is an officially recognized grouping of eight essential vitamins. Vitamin B1 (a.k.a. thiamin): Thiamin is required to convert glucose and amino acids into energy as well asto develop red blood cells and maintain muscle tissue. Thiamin deficiency has been linked to Type II Diabetes,particularly in the formation of advanced glycation endproducts (AGEs), which occur at an abnormally highrate among diabetics. Benfotiamine is a form of thiamin that has been shown in studies to be 5 times morebioavailable than regular thiamin. In fact, clinical trials have demonstrated that benfotiamine can improvenerve function by 30% and decrease nerve pain by 50% among diabetics.
Vitamin B2 (a.k.a. Riboflavin): While playing a role in the energy metabolism of carbohydrates, fats, andproteins, B2 is particularly active in skin and vision health. B2 has long been used as an adjunct in thetreatment of neonatal jaundice and has recently been added to anti-migraine protocols as well. Vitamin B3 (a.k.a. Niacin): The derivatives of B3 form the basis of the oxidized and reduced forms ofNicotinamide Adenine Dinucleotide (NAD+ and NADH), which are essential in the process of cellularrespiration and energy formation. B3 also plays an essential role in DNA repair, removing toxic chemicalsfrom the body, and assisting in hormone production. Niacin is also effective at inhibiting the release of low-density lipoproteins (or LDL [bad] cholesterol) into the blood from the liver, making it a treatment of choicefor hyperlipidemia.
Most niacin supplements are in nicotinic acid form, which has been associated with a ‘flushing' effect, anunpleasant warming and itching of the skin when taken at significant doses. Inositol hexanicotinate is a formof niacin that is free of this effect.
Vitamin B5 (a.k.a. Pantothenic acid): B5 is needed to form coenzyme A (later becoming acetyl-CoA), whichis central to cellular respiration and energy production. Pantothenic acid must first be converted intopantethine in the body, and the isolation of pantethine in supplement form has been able to produce resultsin clinical trials not seen with conventional pantothenic acid supplements. These results include lowered totaland LDL (bad) cholesterol levels.
Vitamin B6 (a.k.a. Pyridoxine): Pyridoxal-5'-phosphate is the active coenzyme form of B6, and is a catalyst forat least 113 known essential enzymatic reactions in the body. These include the metabolism of all endogenousamino acids. P5P is also important for the proper metabolism of essential fatty acids as well as the formationof red blood cells and neurotransmitters, making P5P a factor in optimal cognitive function as well. Adeficiency in vitamin B6 can lead to anemia, depression, dermatitis, hypertension, elevated levels ofhomocysteine and water retention, insomnia, premenstrual tension, irritability, muscle twitching, convulsions,and kidney stones. B6 has been successfully studied for its ability to enhance the immune system and alleviatethe symptoms of autism, carpal tunnel syndrome (CTS), anemia, premenstrual syndrome (PMS),hyperhomocysteinemia and other conditions. Vitamin B12 (a.k.a. Cyanocobalamin): Vitamin B12 has distinguished itself among the B-vitamins by itsspecific effects on neurological health. B12 is also very important to the methylation cycle. Methylcobalaminis the active coenzyme form of B12.
Folic Acid: Folic acid is needed for the synthesis of new red blood cells and DNA. A deficiency can lead tomegaloblastic anemia as well as elevated levels of homocysteine. 5-methyltetrahydrofolate is a highlybioavailable, natural form of folate. Biotin is another B vitamin that is involved in the metabolism of protein,carbohydrates and fats, and finally, although not strictly a vitamin, choline is an essential nutrient that playsan important role in the structural integrity of cells and in the synthesis of the key neurotransmitteracetylcholine.
Orthomolecular Research
& Scientific Integrity
AOR 9 - 4101 19th Street NE, Calgary, Alberta T2E 6X8 Canada