Fate of Oxytetracycline & Doxycycline
in Soil & Underground Water
Lama Sameeh Mohammad Awartani
Supervised By
Dr. Shehdeh Jodeh
Submitted in Partial Fulfillment of the Requirements for the Degree of
Master of Science in Chemistry, Faculty of Graduate Studies, at An-
Najah National University, Nablus, Palestine 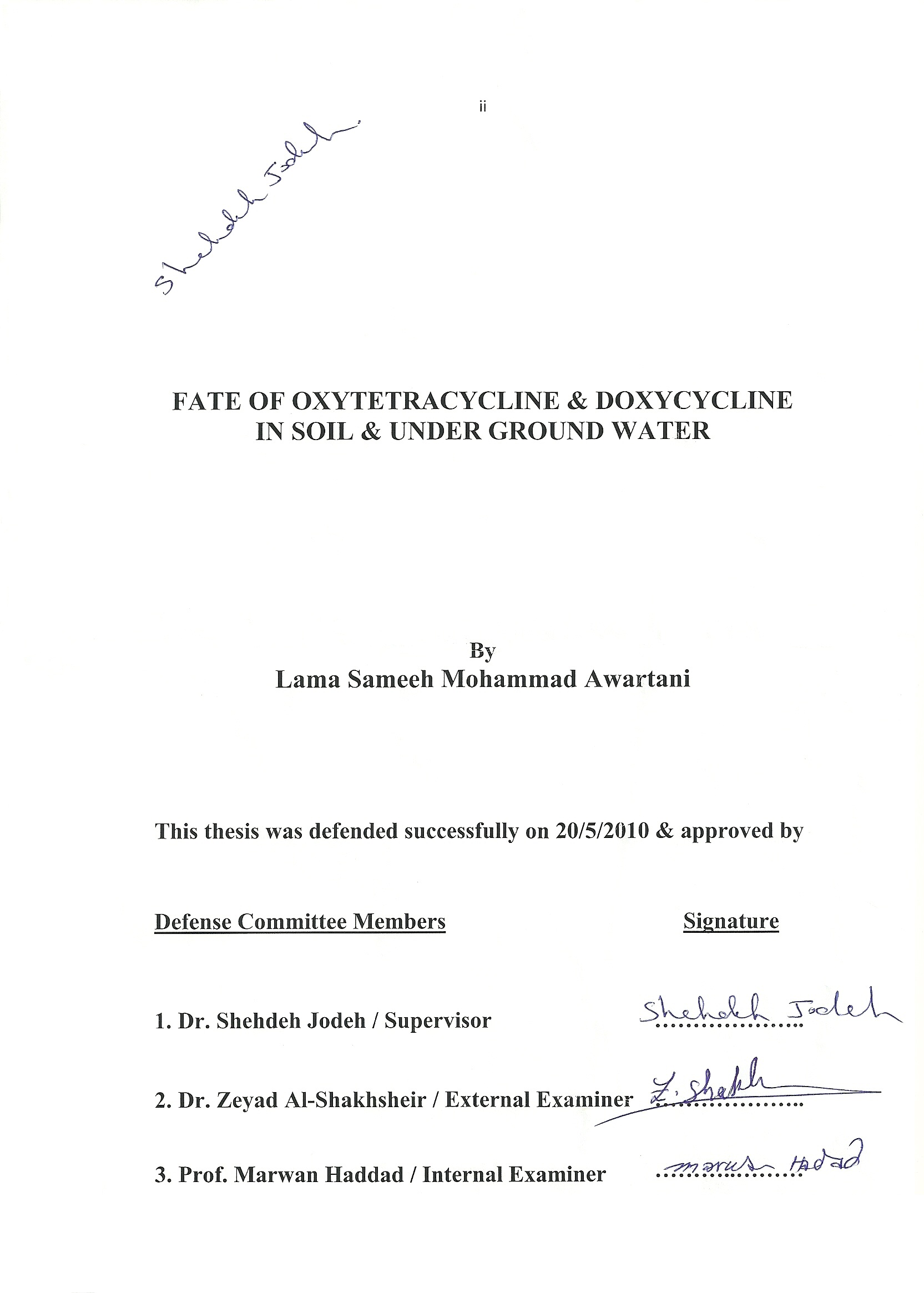 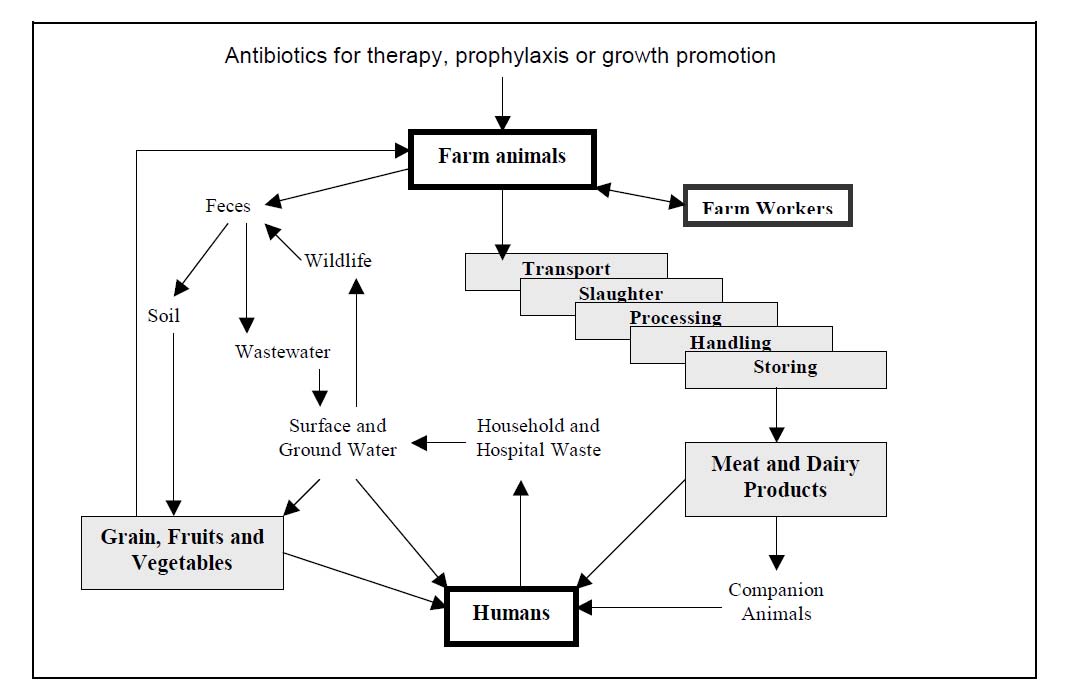 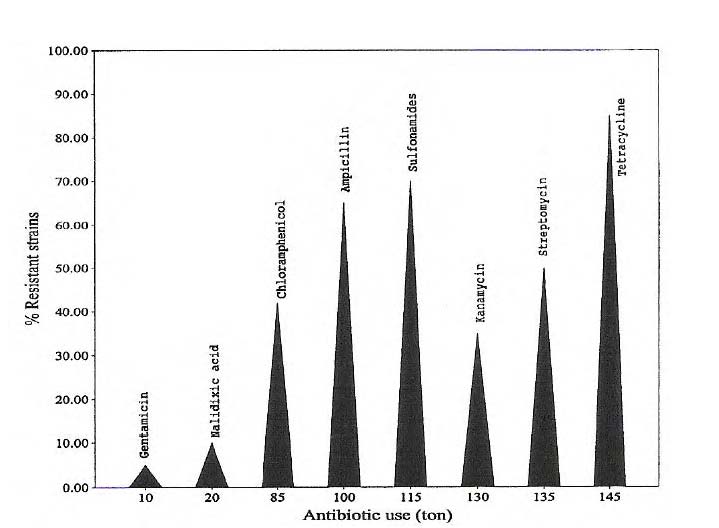 Fig. (2.5): The relationship between antibiotic use and increase in antibacterial
resistance [49]

2.6 Adsorption onto Soil
2.6.1 Adsorption Process
Adsorption is a surface phenomenon that is defined as the increase in concentration of substance at an interface between two phases which can be solid-liquid. Adsorption from solution onto solid occurs as a result of one two characteristic properties for a given solvent-solute-solid system. The primary driving force for adsorption may be consequence of (solvent disliking) character of the solute to the solvent, or high affinity of the solute for the solid [50]. The second primary driving force for adsorption results from a specific affinity of the solute for the solid, where the atoms at the solid's surface are subjected to unbalanced forces of attraction which are normal to surface plane and are merely extension of the forces acting within the body of the material and ultimately responsible for the phenomenon of adsorption [51]. The adsorption process includes electrical attraction of the solute to adsorbent, Van- der Waals attraction or of chemical nature. Physical adsorption dose not involve sharing or transferring of electrons & maintains the individuality of interacting species. The interactions are fully reversible where adsorption occurs at the same temperature and the process may be slow because of diffusion effects, but chemical adsorption involves chemical bonding and is irreversible. In physical adsorption molecules are free to undergo translation movement within the interface, but in chemical adsorption, molecules are considered not to be free to move on the surface where they are attached to active centers. Therefore in chemical adsorption molecules being saturated when each active center is occupied and adsorption dose not exceed beyond the first layer, but it is possible that additional physical adsorption occurs [52]. The heat of physical adsorption is low compared to that of chemical adsorption & chemical interaction between adsorbent & adsorbate is favored by high temperature. Most adsorption phenomena are combination of the three adsorption forms that is the several forces often interact to cause concentration of particular solute at an interface [53]. 2.6.2 Adsorption Equilibrium Isotherms
Adsorption equilibrium is a physic-chemical aspect which determines the ultimate adsorption capacity. As the adsorption process proceeds, the adsorbed solute tends to desorbs into solution. Ultimately equal amounts of solute are absorbed & desorbed simultaneously, where no change can be observed in the solute concentration. Consequently the adsorption process attains equilibrium state called adsorption equilibrium. The equilibrium position is characteristic of the entire system, the solute, adsorbent, solvent, temperature, pH, and so on [53]. At this equilibrium position, there is a defined distribution of solute between the solid and the liquid phases, also the adsorbed quantity usually increase of solute The presentation of the amount of solute adsorbed per unit of adsorbent as a function of the equilibrium concentration of adsorbent in the bulk solution under a set of experimental conditions is termed as the adsorption isotherm. The shape of an isotherm gives qualitative information about the adsorption process. These can be broken down into four main classes, each of which can include several relatively minor variations [54, 55], fig 2.6 shows Giles isotherm classifications. 1- S class: of the four main types, it is the most difficult to explain fully,
since the shape appears to depend upon the interaction of a number of factors. It is indicative of vertical orientation of adsorbed molecules at 2- L class: the normal isotherm, it may be said to occur with majority of
system. Usually indicative of molecules adsorbed flat on the surface of the solid or vertically oriented adsorbed ions with particularly strong inter molecular attraction or adsorption of ionic micelles. 3- H class: high affinity, this is a special case of the previous class caused
by very high solute affinity (high affinity ion exchange with low-affinity ions) and produced by adsorption of large units or chemical adsorption. 4- C class: constant partition, linear curves, where the solute penetrates the
solid more readily than the solvent & tends to open up the structure. In other words, the solute rather than solvent initiates adsorption. Several types of isotherms relations may occur. The most common relationship is in which adsorption from solution leads to the deposition of apparent single layer of solute molecules on the solid surface. Occasionally multi molecular layers of solute may be adsorbed. The Langmuir & Freundlich isotherms are valid for single layer, where as Brunauer Emmett & Teller (BET) isotherm represents multilayer adsorption. Both Langmiur & BET equations are limited by the assumption of unifom energies of adsorption on the surface [51]. 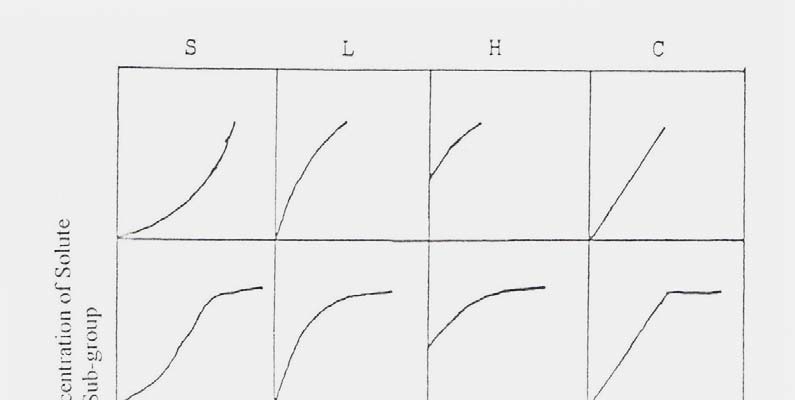 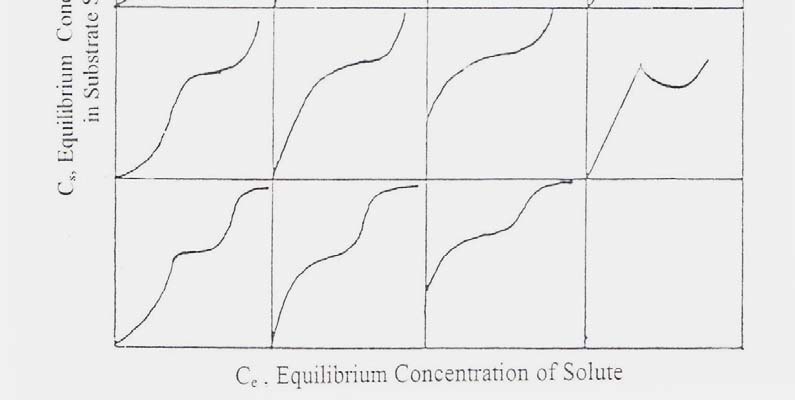