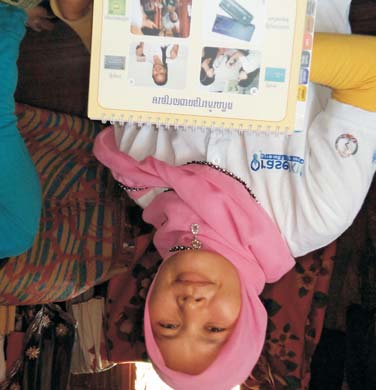 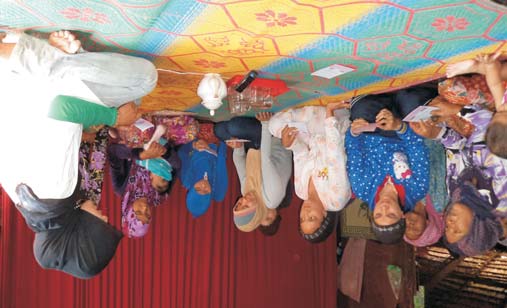 RHAC occasional UPDATES
Cham (Khmer Muslim) Community and FP Methods
in Baray Commune, Prey Chor District, Kampong Cham
RHAC has been working to strength essential public ToGoH has been providing technical assistance to health services in Kampong Cham (KPC) province the OD and HCs in improving the quality of services, for the past four and half years under the USAID helping the HCs and community based volunteers supported Together for Good Health Project (VHSGs) to create demand for services and (ToGoH). The province has pockets of significant improving access to available services at HCs Khmer Muslim communities who are usually through training, coaching, mentoring.
referred to as Cham people. Prey Kcheay Khnong works closely with HC staff to motivate the VHSGs is one of the 13 villages in the Baray Commune in for community mobilization activities as well as to Prey Chhor Operational District (OD) which is update the VHSGs with basic knowledge about predominantly of Khmer Muslims, about 20 families reproductive health, family planning, newborn, child with 1459 inhabitants. We profile here one of the health, TB and referral mechanisms. VHSG profiled two Cham Village Health Support Group volunteers here is fairly typical of the VHSGs in most of the and hear views of the changing attitudes of her villages in rural Cambodia but they play a vital role in community towards family planning use and linking community's health needs with service improved access to basic health services at public providers at health facilities such as the Health sector facilities such as Health Centers (HCs).
Centers and Referral Hospitals.
A Committed Cham VHSG-Ms. Saros Ms.Sa Saros, 27 from Prey Kcheay Khnong village of Chamcommunity has been an active Village Health Support Group(VHSG) member since 2010. She was nominated by her villagechief to be a VHSG when the RHAC/ToGoH team began workingwith HCs under the Prey Chhor OD. Interestingly, she teamswith her Father from their village as a Father-Daughter team asthere are two VHSGs per village in accordance with MOH HealthCoverage policy.
Late March, RHAC KPC Provincial Program Coordinator (PPC)during one of his periodic monitoring visits sat down with Ms. SaSaros, and her neighbors in the village to find out Ms. Saroswork. She is a young single woman with a shy disposition butwith full confidence, she told our PPC "I provide health educationregarding family planning, water and sanitation, maternal and Ms.Sa Saros, 27, a VHSG from Prey Kcheay Khnong village in Kampong Cham child health, vitamin A, Immunization, TB, givingTB drug to TB patients. "Oh you are the DOTSWatcher?" "Yes" answers Saros "I have 4-5 TBpatients to take care". When asked where do youget TB drug from? Saros said "From the HealthCenter" How do you get the TB patients to take TBdrugs? At their house or at your home? And in themorning?" Ms. Saros replied, "In the morning, I getthe TB patients to take drug in front of me at my Ms. Saros explaining the benefits of MNH voucher to a neighborhood group in her village 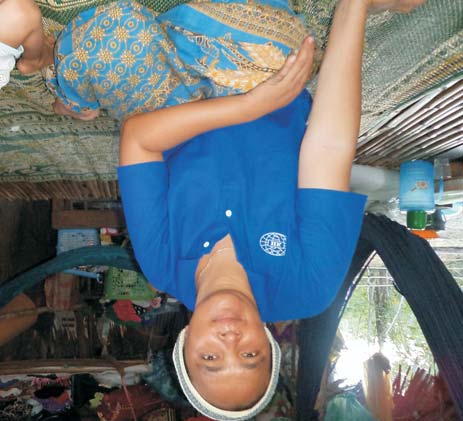 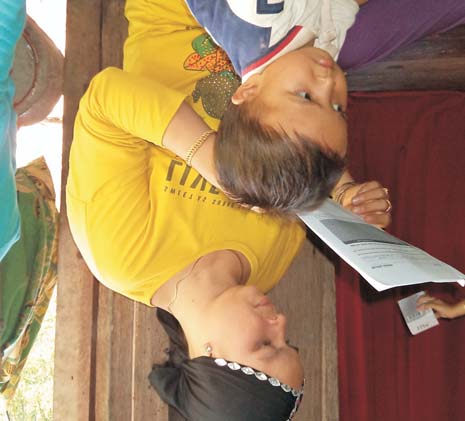 When asked "why do you serve as the volunteer the VHSG's ( Saros's) active performance, Aunt Ay when volunteers get no salary from the Sas, a Cham lady, about 50 years old said that "Saros quite often provides health education to thepeople here once a week". When asked how long "I wish to help my villagers!" "Have you ever she has lived in the village? What are their main attended monthly meeting at the Health Center?" professions? Ay Sas say "I have lived here since Saros said, "I attend bi-monthly meeting" "Do you long time, succeeded from my ancestors'. Majority know me " "No, I know Lok Kru Vath ( RHAC Team of Cham people are farmers. Sometimes, people Leader based in Operational District of Prey Chhor- migrate to other areas far from their residences for Kang Meas)", answers Saros.
finding jobs to generate family income" said Aunt Ay When asked about the criteria for receiving and Sas. "Some people are hired to dig the potatoes, to using the ToGoH designed Maternal & New Born farm at Boeng Ket Rubber Plantation in Stung Health Voucher, Saros replied that "Pregnant Trang, and some go to Keo Seima in Mondol Kiri and women must get the Voucher from the volunteer, then have at least 4 ANC visits, then go to receive When asked how she sees changes in health delivery service at Health Center and must stay 24 seeking behavior of Cham people? Ay Sas reveals hours after delivery at the Health Center".
that "To my observation, before during my This volunteer has been working with the ToGoH ancestors, there was not any family planning/birth Project for more than 3 years and has received spacing and no midwives and traditionally never training in basic information on MNCH, RH/FP, TB, seek health care at health centers. But now Cham Vitamin A, community mobilization et al, according people including me go to the heath center for medical check up when they are sick" Said Ay Sas.
"Is there any ban from birth spacing due to rumors or Here is a sampling of her village communities' views due to your God? PPC quizzed Ay Sas. "No, you about Ms. Saros' work as our PHC went around the see all of them are using birth spacing methods village to hear their views about health and the pointing to the women sitting close to her during changes occurring in their communities. "I witness interview" said Ay Sas.
Cham Ladies Speak.
Mrs.Mao Sitras, 32 Mrs.Mao Sitras, 32, a neighbor and another Mrs.Asi Mas, 27 years and another Cham Cham lady began using pill after her second child neighbor has a 2 year old child and she has beenusing Injectable (Depo provera) since her child was about 6 months old. When asked why birth was 7 months old. When asked about birth spacing? Sitras replied "Because my eldest child spacing, Mrs. Mas said "not want many children, is not yet mature enough to take care of my wait till my child to be mature/grow up, wait till I second child, not have earned enough money have my own house because now I stay with my and not want to have another child." parents". When asked who encouraged her toreceive birth spacing method? Saros said "HealthCenter midwife explained me various methods offamily planning, then I chose injection". 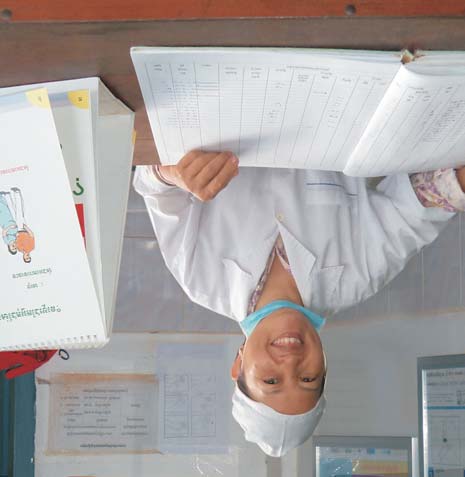 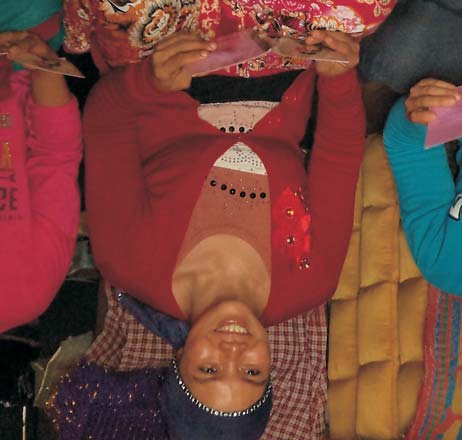 Mrs.Ros Himas, 30, has only one five year olddaughter and started using Injection when herdaughter was 6 weeks old. She told the PHC thatHC midwife Sister Na" provided counseling to herimmediately after delivery.
Mrs.Am Nas (no picture), 51 years, currently hasfive children in the family. "I started using birthspacing methods after delivery of my youngestchild, use injection for few times, then my periodwas out, I stopped from then" said Am Nas inlaughter.
Who told you to use birth spacing methods,when? "Midwife Na and Ra guided me when Iwent to the Health Center for illness", Mrs. AmNas said.
Mrs.Ros Hymas with her only 5 year daughter A Cham Midwife in the Service of her Community In an interview between USAID-ToGoH staff and current users of family planning from Baray Health Mrs. Bin Amara, 42, one of the two midwives Center in 2012 and highlighted below the FP users working in Baray Health Center, said that she has from Cham clients. In calculating the percentage, been working there since 1998.
current users or contraceptive prevalence rate at HCreached (497 current users/1466 "My responsibilities are family planning/birth reproductive aged women =33%) compared to the Integrated Management of Childhood annual target 2012 (32%).
Illness and delivery service" says Amara. "Weprovide informed choice to the clients: some chooseInjections, pills…some clients are afraid offorgetting to take pills, then choose injection, somedo not like injections because they are afraid ofhaving no period" clarifies Mrs.Amara. Asked howdo you feel about Muslim people's health seekingbehavior? Mrs.Amara observes "Now Chamcommunity has more knowledge that is differentfrom previous time. I heard that Cham people neverused birth spacing before.
community) have changed their behavior, evendelivery and ANC service are used more by Chamcommunity. I give 1 tablet of Mebendazole, VitaminA and 42 Folic Acid Iron to post delivery women. Inoticed that Cham people use delivery service morethan Khmer people. Cham people never come totraditional birth attendants but Khmer people still goto the TBA for delivery" added Mrs.Amara.
To testify the positive health seeking change of Mrs. Bin Amara, a cham midwife at the Islamic/Cham Community in Baray commune, Baray Commune Health Center.
USAID-ToGoH Project collected the number of Number of FP Current User (Jan -Dec 2012) Cham community accounts for 16% of the total family planning current users in Baray Health Center in 2012.
Note: Reported by the RHAC/ToGoH Kampong Cham Provincial Health Coordinator, Mr. Kea Bou

This article appeared in a journal published by Elsevier. The attached copy is furnished to the author for internal non-commercial research and education use, including for instruction at the authors institution and sharing with colleagues. Other uses, including reproduction and distribution, or selling or licensing copies, or posting to personal, institutional or third party