The American Journal of Sports Graft Fixation in Cruciate Ligament Reconstruction
Jeff Brand, Jr., Andreas Weiler, David N. M. Caborn, Charles H. Brown, Jr. and Darren L. Johnson Am J Sports Med The online version of this article can be found at: can be found at:
The American Journal of Sports Medicine
Additional services and information for
0363-5465/100/2828-0761$02.00/0THE AMERICAN JOURNAL OF SPORTS MEDICINE, Vol. 28, No. 5 2000 American Orthopaedic Society for Sports Medicine Graft Fixation in Cruciate Ligament
Reconstruction
Jeff Brand, Jr.,* MD, Andreas Weiler,† MD, David N. M. Caborn,* MD, Charles H. Brown, Jr.,‡ MD, and Darren L. Johnson,*§ MD From the *University of Kentucky School of Medicine, Lexington, Kentucky, †Sports Traumatology & Arthroscopy Service, Humboldt-University, Berlin, Germany, and ‡Brigham and Women's Hospital, Department of Orthopaedic Surgery, Boston, Massachusetts s.Current rehabilitation protocols after knee ligament sur-gery stress immediate full range of motion, return of neu- Cruciate ligament reconstruction has progressed dra- romuscular function, proprioception, and early weight- matically in the last 20 years. Anatomic placement of bearing forces up the kinetic chain. In the early ligament substitutes has fostered rehabilitation efforts postoperative period, graft fixation is the weak link within that stress immediate and full range of motion, imme- the entire system. No commonly used graft fixation has diate weightbearing, neuromuscular strength and co- ultimate failure strength or stiffness comparable with the ordination, and early return to athletic competition (3 native cruciate ligament (Table 1). Fixation methods must months). This has placed extreme importance on se-cure graft fixation at the time of ligament reconstruc- be rigid and stiff to allow current rehabilitation principles.
tion. Current ligament substitutes require a bony or soft Current fixation techniques involve soft tissue and bone tissue component to be fixed within a bone tunnel or on within a bone tunnel or periosteal fixation away from joint the periosteum at a distance from the normal ligament attachment site. Fixation devices have progressed Bone-patellar tendon-bone, quadrupled hamstring ten- from metal to biodegradable and from far to near- don, or quadriceps tendon-bone are the most commonly normal native ligament attachment sites. Ideally, the used ligamentous substitutes in cruciate ligament recon- biomechanical properties of the entire graft construct struction. Using these ligament substitutes with current would approach those of the native ligament and facil- fixation devices, we have been unable to reproduce the itate biologic incorporation of the graft. Fixation should normal transition zones of insertion of the ACL and PCL.
be done at the normal anatomic attachment site of the Given that anatomic structure dictates function, the me- native ligament (aperture fixation) and, over time, allow chanical profile of the ligament substitute has not been the biologic return of the histologic transition zone from reproduced. Variables that we are able to measure in the ligament to fibrocartilage, to calcified fibrocartilage, to basic science laboratory at time zero of ligament recon- bone. The purpose of this article is to review current struction include data on ultimate failure load, yield point, fixation devices and techniques in cruciate ligament stiffness, displacement to failure, and mode of failure.
Correlation of these results with clinical outcome has notbeen reported.
Our purpose is to review all current information with regard to ligament substitute fixation of bone and soft The importance of secure graft fixation in ligament recon- tissue grafts. It is important for the surgeon to be aware of struction has changed dramatically in the last 20 year- the difference in fixation techniques with the associatedbiologic consequences. Different graft substitutes may re-quire different fixation techniques that have direct bio- § Address correspondence and reprint requests to Darren L. Johnson, MD, logic implications. Knowledge of these fixation techniques Chairman of Orthopaedic Surgery, University of Kentucky School of Medicine, will allow the clinician to make necessary intraoperative and Kentucky Clinic, K-439, 740 Limestone, Lexington, KY 40536.
One author has commercial affiliation with a product named in this study.
postoperative decisions in cruciate ligament reconstruction. 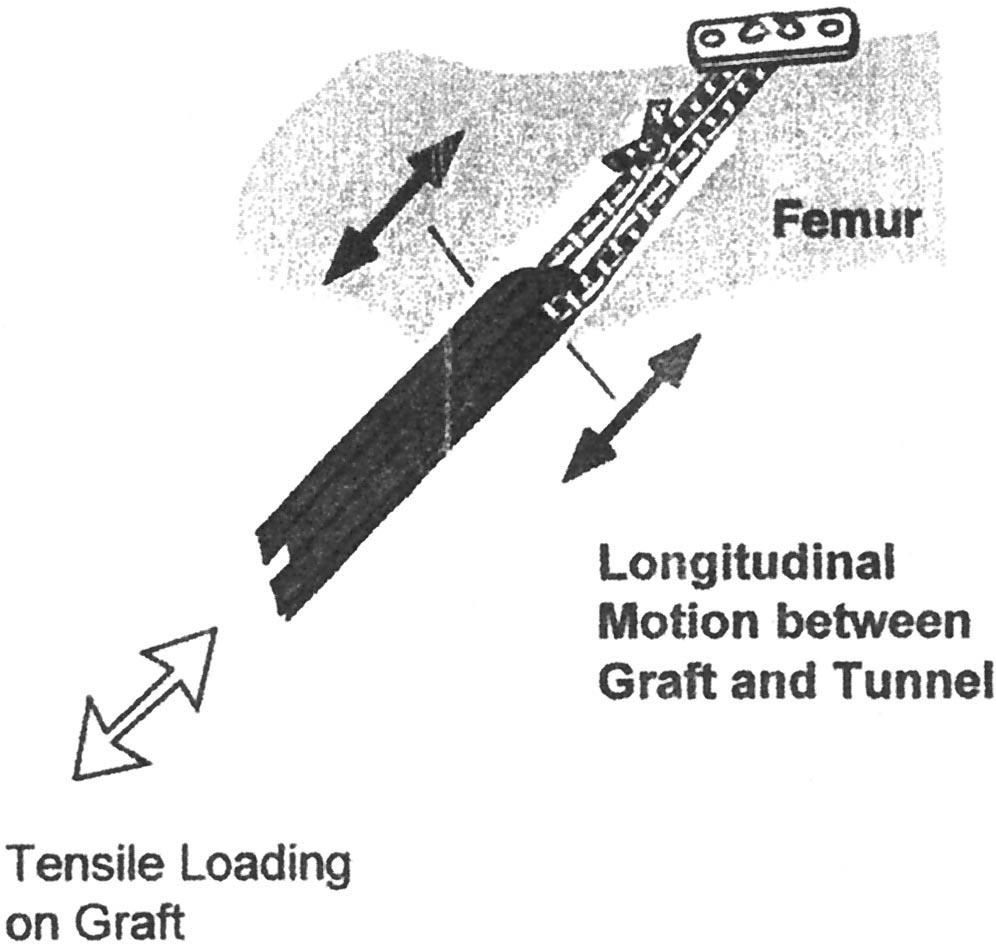 Brand et al. American Journal of Sports Medicine There is evidence that less than 454 N is sufficient for Ultimate Load to Failure and Stiffness of Current Graft activities of daily living. In a clinical study, Shelbourne Selections in Cruciate Ligament Surgery and Gray79 reported use of a button for both the tibial and Ultimate Strength femoral fixation of a patellar tendon reconstruction, which Graft Selection (ref.) has a failure strength of 248 N.43 Excellent clinical and objective knee stability was maintained with an acceler- ated rehabilitation program in their series of patients.
Patellar tendon25 Quadrupled hamstring tendon (semitendinosisand gracilis)35 Biomechanical Properties Quadriceps tendon85 Stiffness is the slope of the linear region of the load-elongation curve and is usually reported in units such asnewtons per millimeter (N/mm). As a graft and its fixation IDEAL GRAFT FIXATION device are loaded with a tensile force, displacement in thegraft and fixation device occurs equal to an amount de- scribed by its stiffness. Present graft fixation alternativesare less stiff than the native ACL and graft choices. This Because there is only one means of graft fixation that can be compared with a chain secured to posts by bungee approaches the strength of the native ACL, the question cords at either end of the chain. As force is applied to the is, "How much strength is required of a cruciate ligament chain, the bungee cords, not the chain, will displace under reconstruction for activities of daily living and a progres- tensile load. Mechanically, the majority of tendon fixation sive rehabilitation program?" constructs are less stiff than the interference screw Noyes et al.69 have estimated the strength required for against a bone plug, which has been considered the stan- activities of daily living to be 454 N based on the failure dard for fixation (see Tables 4, 7, 8, and 9). Thus, given strength of the ACL. They state that, "It seems reasonable that ultimate failure strength is comparable between the to assume that under normal conditions biological tissues two given fixation choices, tendon constructs may displace are subjected to forces ranging from one-tenth to not more or slip more before they fail, creating laxity in the graft than one-fifth of their breaking loads." The same group concludes "For the posterior cruciate ligament (PCL) these Many tendon fixation devices are "indirect." They rely force levels would be increased." on linkage material to connect the tendon to the fixation Morrison,64–66 a bioengineer, writing in the late 1960s device. A biomechanical study compared strain that was and early 1970s in a series of three articles relating force induced by cyclic loading in a patellar tendon graft and a plate and gait analysis data, made calculations and con- quadrupled hamstring tendon graft and found that the clusions regarding the forces in the ACL and PCL; theseare shown in Table 2. Markolf et al.58 used a cadavericmodel that ignored muscle forces and examined the forceson the ACL, a patellar tendon graft, and an overtensioned(45 N) patellar tendon graft. The patellar tendon graftexperienced higher forces than the native ACL (peakforce, 297 N) and overtensioning the graft increased theforces experienced by the graft (up to 497 N). In a similarstudy by Markolf et al.,59 the PCL forces were examined inthe intact PCL and a patellar tendon graft was used toreconstruct the PCL. The forces in the PCL study weremuch lower, generally less than 100 N. The higher forcesdeveloped in some grafts in hyperextension and hyperflex-ion, leading the authors to recommend avoiding thesemotions after reconstruction.
Estimations of Forces Present in the Cruciate Ligaments in Activities of Daily Living64–66 Descending stairs Figure 1. A schematic diagram demonstrating the bungee
effect or longitudinal graft-tunnel motion. 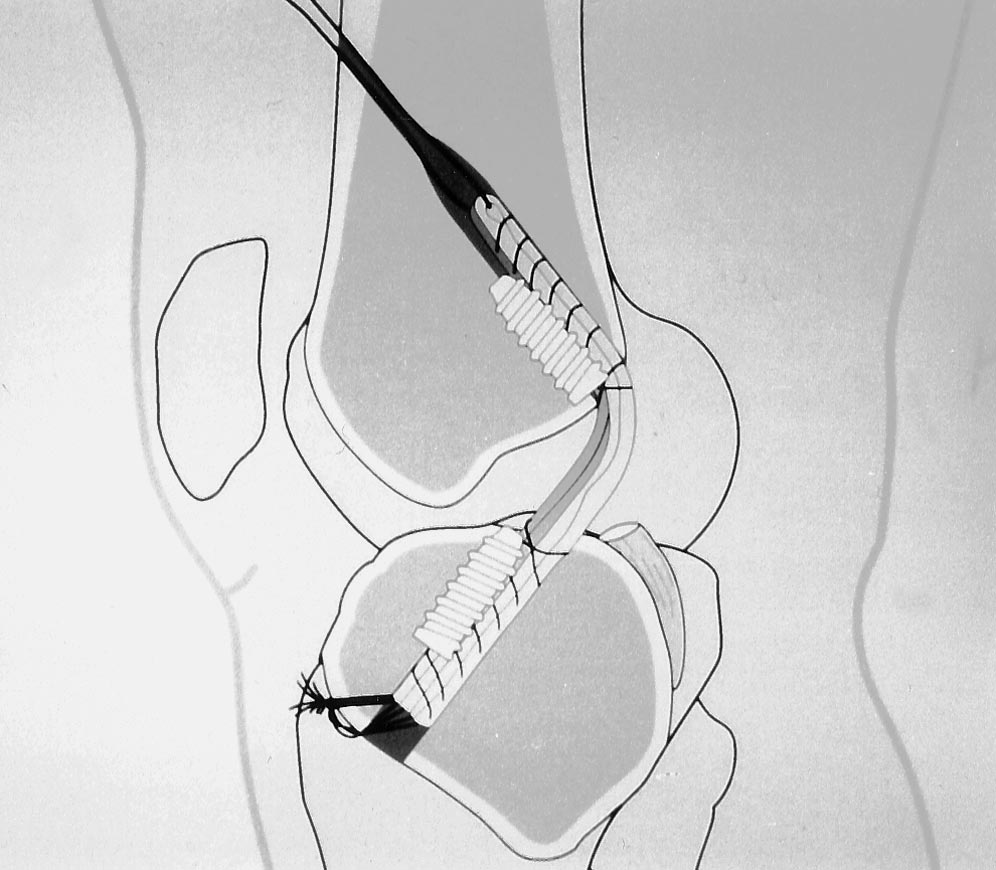 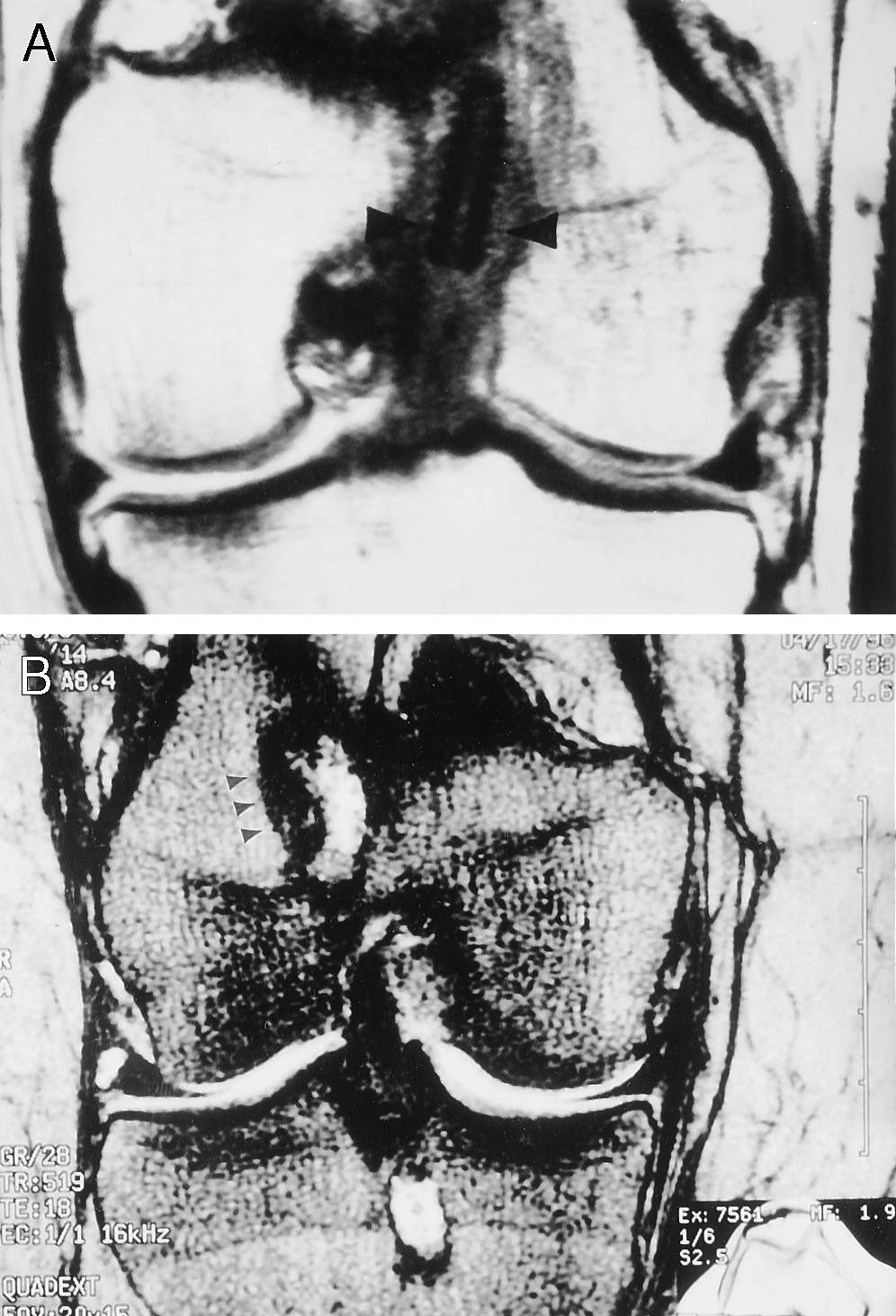