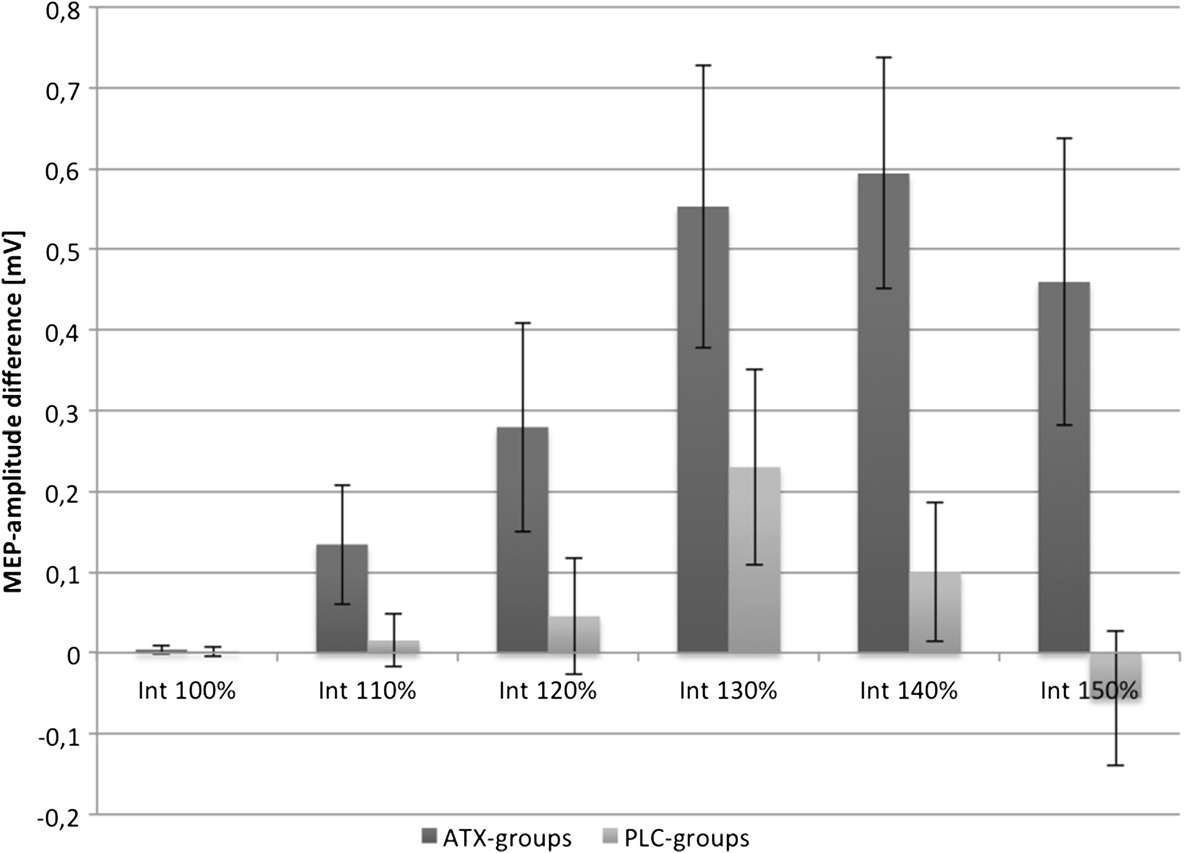 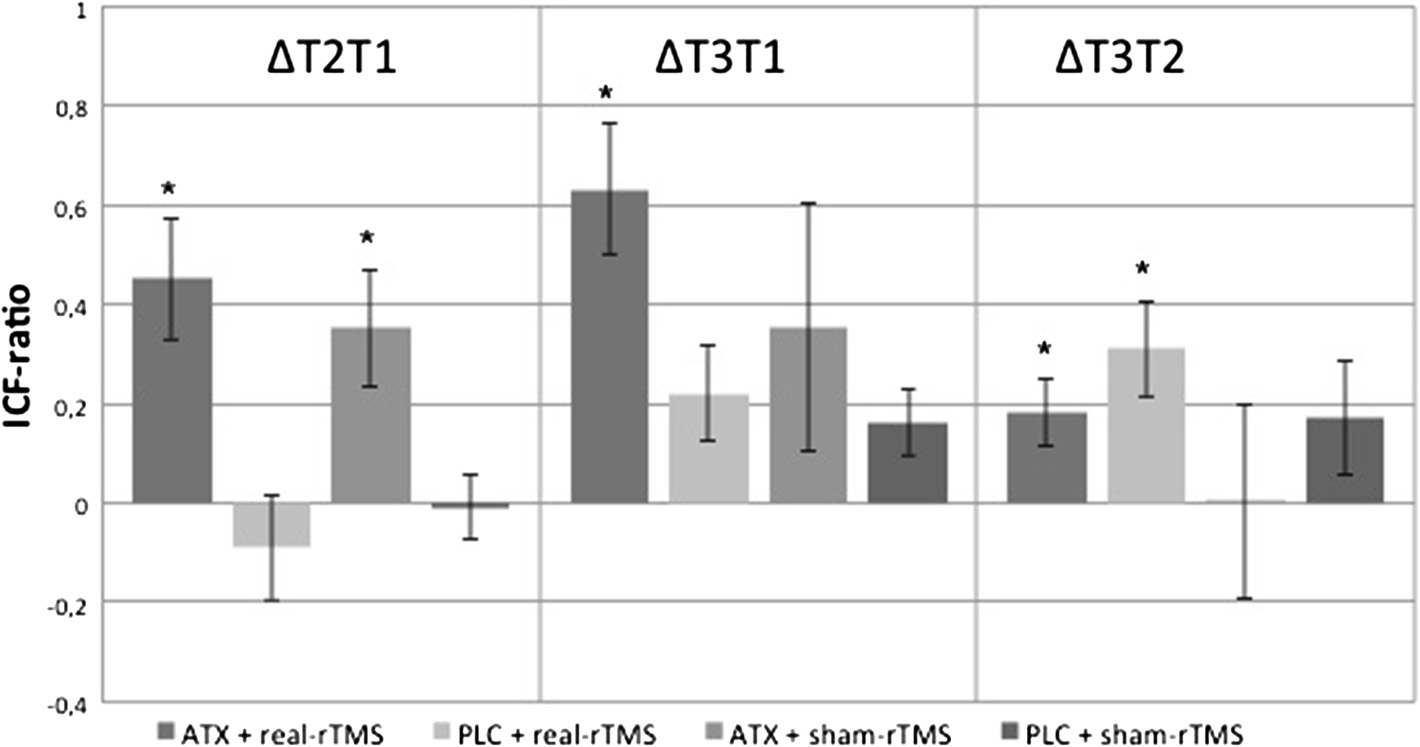 Sczesny-Kaiser et al. BMC Neuroscience 2014, 15:46 Table 1 ICF-ratio data difference ± SEM difference ± SEM difference ± SEM Multiple paired two-sided post-hoc t-test of ICF-ratio data. Bonferroni-corrected p-value threshold (p = 0.025). *significant.
hoc t-test showed significant higher TSET ratio for the (see Figure Third, only the combination of ATX and ATX + real-rTMS group compared to the PLC + sham- 10 Hz rTMS significantly improved motor learning with rTMS group (t(16) = 4.4, p < 0.001). There were no sig- regard to target score and execution time (see Figure ).
nificant differences between PLC + sham-rTMS groupand PLC + real-rTMS or ATX + sham-rTMS group. No ATX led to a significant increase of corticospinal and significant differences could be shown for the ER intracortical excitability in M1 (rmANOVA: within-subject factor "time": F(1,7) = 0.01, We could reproduce the facilitative effects of ATX on p = 0.24; between-subject factor "group": F(3,32) = 1.11, cortical excitability in M1 as had been previously shown by p = 0.36; interaction "time x group": F(3,21) = 0.71, p = 0.82).
Gilbert and coworkers . In contrast, we did not see asignificant ATX-induced M1 disinhibition. The reduction of intracortical inhibition between the beginning and end of Our study yielded three major findings. First, ATX led to the study (ΔT3T1) did not depend on the group, i.e. on the a significant increase of corticospinal and intracortical type of intervention. Similar effects of NE on M1 excit- excitability in M1 one hour after intake of 60 mg ATX ability could be demonstrated for the NE reuptake in- (see Figures and ). Second, high frequency 10 Hz rTMS hibitor reboxetine. Plewnia and coworkers applied over M1 during a finger tapping motor task showed enhanced corticospinal and intracortical excitabil- was capable of further increasing intracortical excitability ity and improved motor skills in healthy subjects suggest- significantly, but only in combination with 60 mg ATX ing that this is an effect of NE reuptake inhibitors. This Figure 2 Intracortical facilitation. Treatment with 60 mg ATX significantly increased ICF after 1 hour (ΔT2T1). Further increase in ICF after rTMS/motor task sequence (ΔT3T1). p-values are shown in Table (p – threshold = 0.025). Error bars depict standard error of the mean. The absolutemean ICF-ratio values T2 from T1, T3 from T1 and T3 from T2 were subtracted (mean ICF-ratio difference ΔT2T1, mean ICF-ratio difference ΔT3T1,mean ICF-ratio difference ΔT3T1) to calculate the absolute difference. * = significant differences. 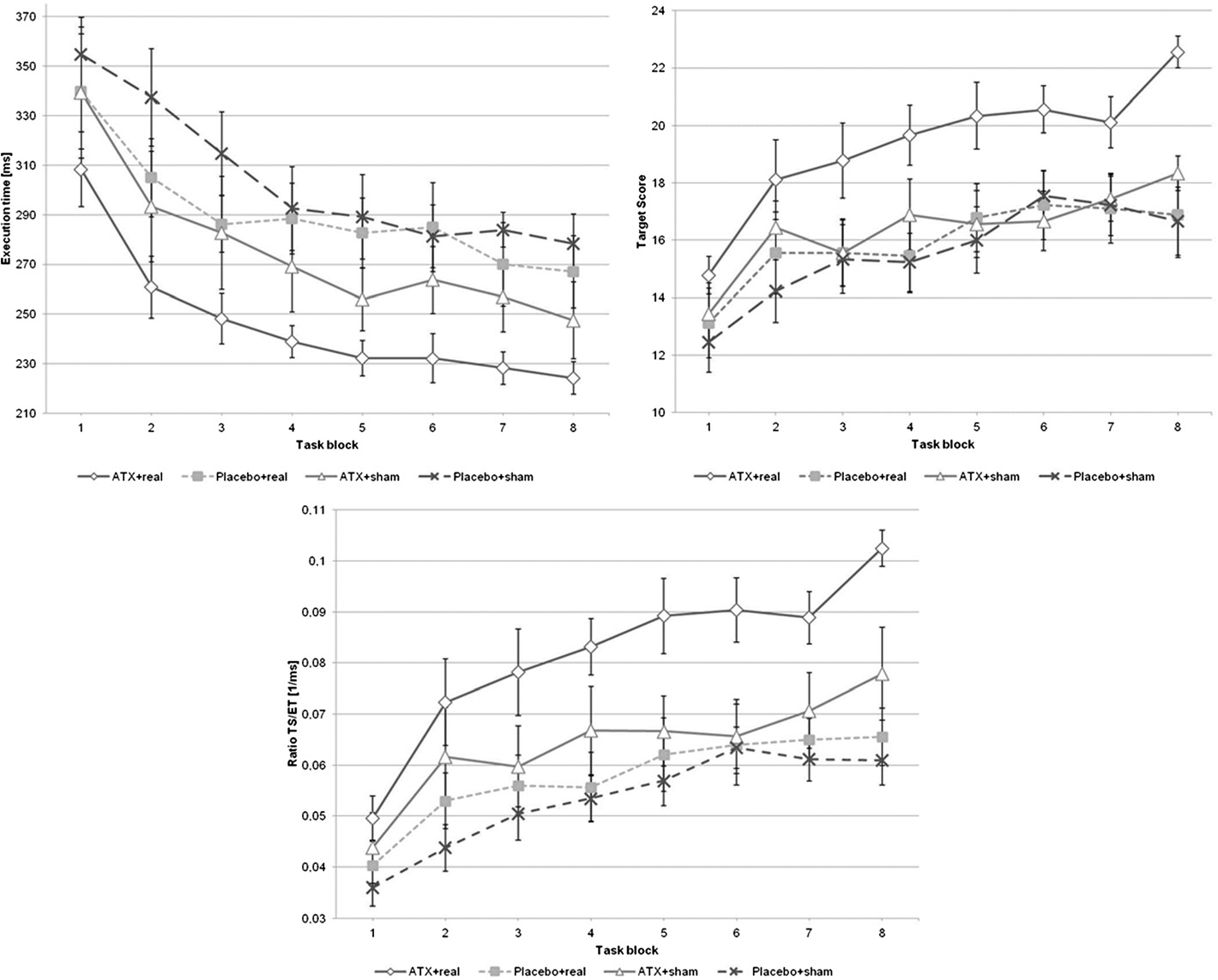 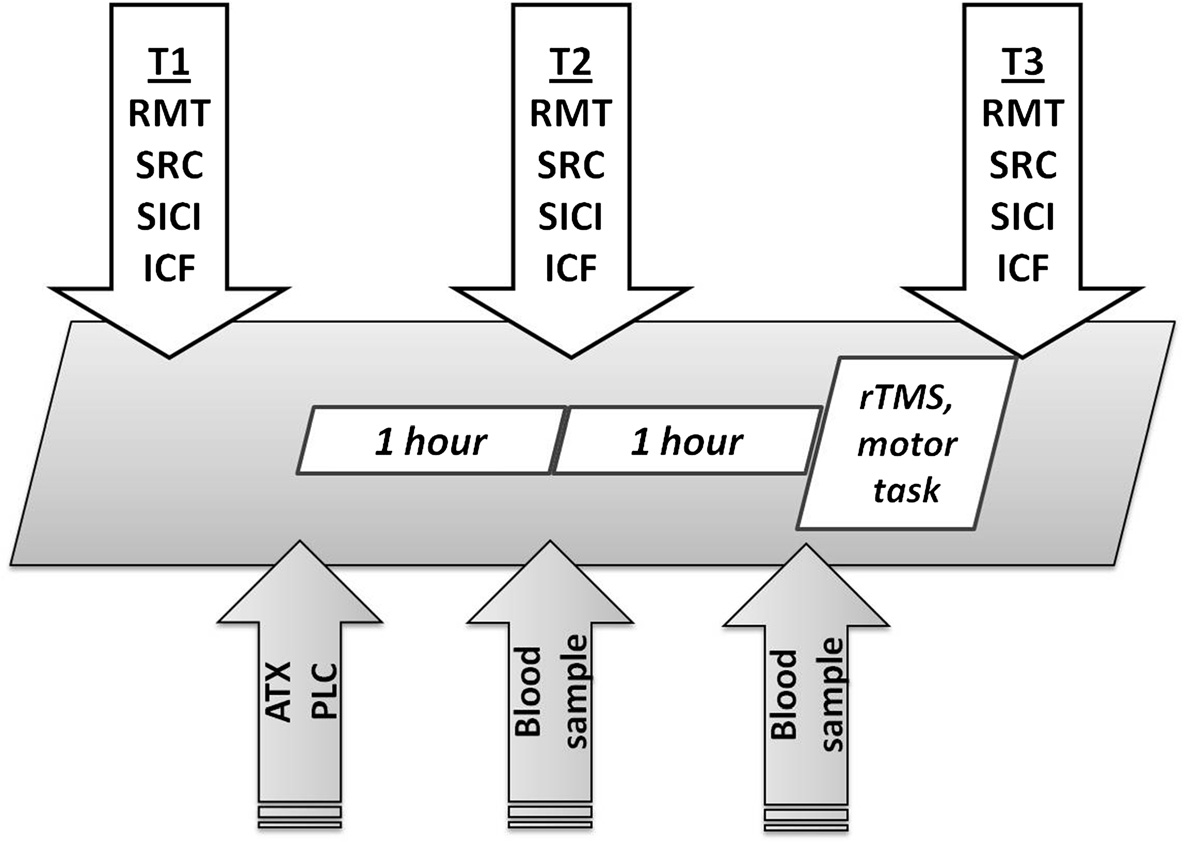 Sczesny-Kaiser et al. BMC Neuroscience 2014, 15:46 Figure 5 Time course of the study and study design.
drug intake itself. The subjects and TMS-examiner did not Stimulus-response curve know color code.
For SRC, spTMS was applied at 100%, 110%, 120%, 130%,140% and 150% of individual RMT. For each stimulus Excitability measurements by TMS intensity, 12 trials were performed. We used the same The following parameters of corticospinal and intracortical TMS-setting for SRC as for RMT-determination. For excitability in the primary motor cortex were investigated: analysis of the SRC data, the slope between data points resting motor threshold (RMT), stimulus-response curve Ti, i =1, 2, 3 of the SRC as the steepness of the linear re- and both short intracortical inhibition and intracortical gression line through the given data points (between facilitation, assessed using paired-pulse TMS [MEPs 100% and 150% stimulation intensity of the individual were recorded with Ag-AgCl-surface electrodes using a RMT) was calculated ].
standard electromyography device (Neuropack M1; NihonKohden, Tokyo, Japan). While stimulating the contralateral hemisphere, recordings were taken from the left first dorsal To apply ppTMS, the circular coil was connected to the interosseus muscle (FDI). The signals were recorded with a Bistim® device which triggered two Magstim 200® stimu- sampling rate of 5 kHz, and amplified with a bandpass of lators. Earlier studies had shown that focal and circular 20 Hz - 3 kHz, a sweep duration of 10 - 50 ms/div and coils elicited comparable results in pp-TMS studies a gain of 0.1 mV/div. During the entire measurements, In this ppTMS assembly, a separate RMT had to be de- muscle relaxation was monitored by EMG. Subjects were termined because of the lowered stimulator output in seated in a comfortable chair in a silent and bright room.
case the Magstim 200 is connected to the Bistim® device.
We tested the interstimulus intervals (ISI) 2, 4, 10 and Resting motor threshold 15 ms. The second stimulus (test stimulus) was adjusted RMT was determined with single-pulse TMS to the to evoke an MEP of approximately 1.0 mV. The condi- nearest 1% of the stimulator output, and was defined tioning stimulus was set at 80% of the individual ppTMS as the minimum intensity which produced four motor assembly RMT. For each ISI, 12 trials were performed.
evoked potentials > 50 μV out of eight trials Single- Before and after ppTMS, 12 single control stimuli using pulse TMS was applied using a Magstim 200® stimulator the same stimulation intensity as for the second (test) (Magstim, Whitland, Dyfed, U.K.) connected to a circular stimulus were applied. The amplitude ratio of the mean coil (outer diameter 14 cm). The coil was placed with its conditioned MEP to the mean control MEP was calculated center near the vertex with the current flowing clockwise for each ISI. For further statistical analysis, parameters in the coil in order to activate predominantly the right of SICI and ICF were defined as the averages of MEP hemisphere and to produce MEP in the left FDI. This ratios obtained at inhibitory ISIs of 2 and 4 ms (SICI), position was marked with a red wax pencil to improve and at facilitative ISIs of 10 and 15 ms (ICF) reproducibility of placement.
ICF-ratios between the three time points were compared

DWI/Drug Courts: Defining a National Strategy Judge Jeff Tauber (Ret.) Director C. West Huddleston Deputy Director March 1999 DWI/Drug Courts: Defining a National Strategy Prepared by the National Drug Court Institute, the education, research and scholarship affiliate of the National Association of Drug Court Professionals. Copyright © 1999, National Drug Court Institute; reprinted May 2004 NATIONAL DRUG COURT INSTITUTE This document was prepared in cooperation with the American Council on Alcoholism; the National Commission Against Drunk Driving; the National Sheriffs' Association; the Drug Courts Program Office, Office of Justice Programs, U.S. Department of Justice; and the National Association of Drug Court Professionals. This document was prepared under Cooperative Agreement Number 1999-DC-VX-K001 from the Bureau of Justice Assistance, U.S. Department of Justice, with the support of the Office of National Drug Control Policy, Executive Office of the President. Points of view or opinions in this document are those of the authors and do not necessarily represent the official position of the U.S. Department of Justice or the Executive Office of the President. All rights reserved. No part of this publication may be reproduced, stored in a retrieval system, or transmitted, in any form or by any means, electronic, mechanical, photocopying, recording or otherwise, without the prior written permission of the National Drug Court Institute. Printed in the United States of America. Drug courts perform their duties without manifestation, by word or conduct, of bias or prejudice, including, but not limited to, bias or prejudice based upon race, gender, national origin, disability, age, sexual orientation, language or socioeconomic status.