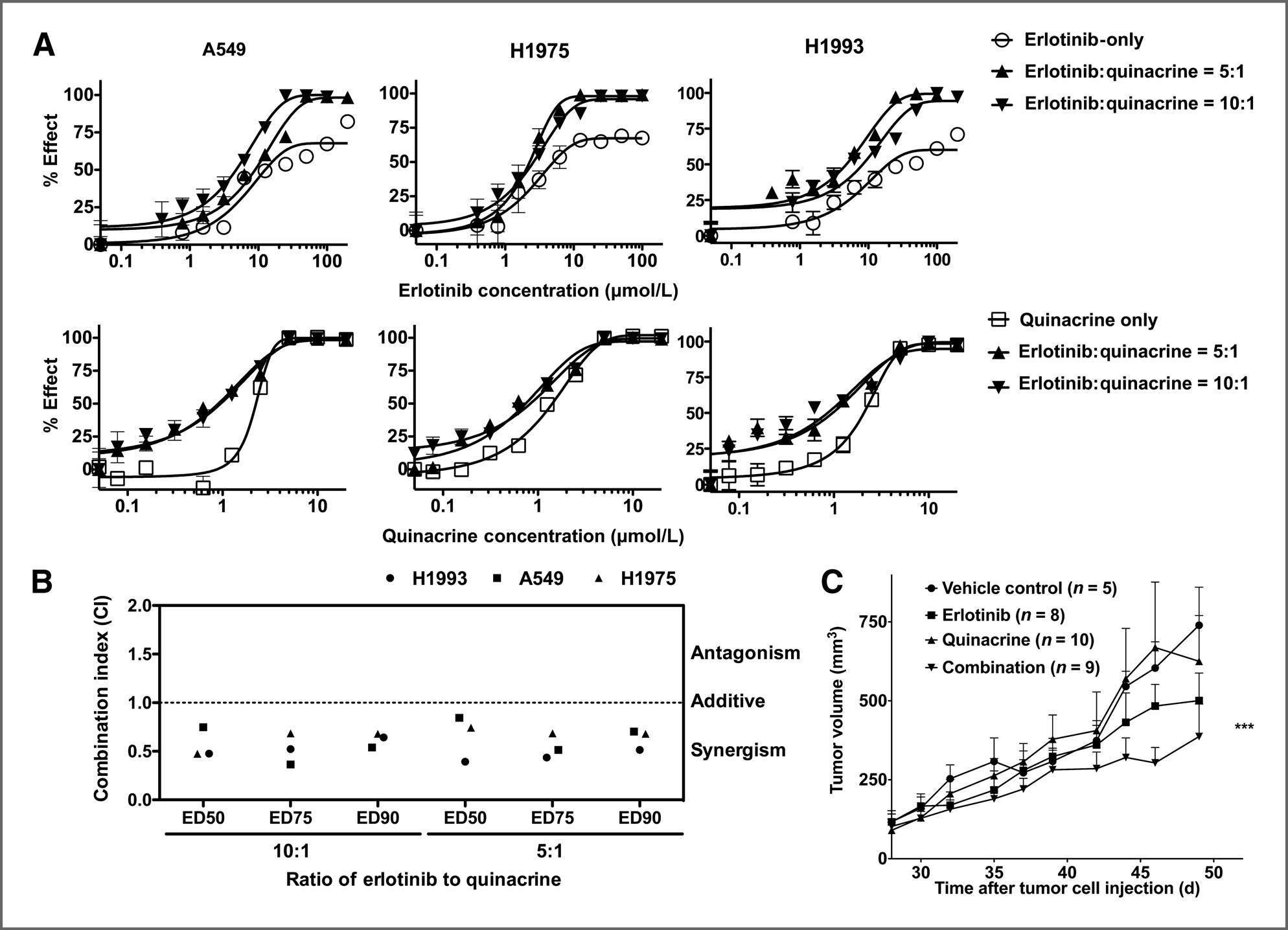 Published OnlineFirst July 15, 2014; DOI: 10.1158/1535-7163.MCT-14-0013 Combination of Quinacrine and Erlotinib in NSCLC Figure 1. The combination of erlotinib and quinacrine is synergistic in several NSCLC lung adenocarcinoma cell lines and inhibits in vivo xenograft tumorgrowth. A, A549 (wtEGFR), H1975 (EGFR-L858R/T790M), and H1993 (MET ampliﬁcation) cells were treated with erlotinib, quinacrine, or the combination ofboth agents at a 5:1 or 10:1 molar ratio. After 72 hours, cell viability was determined by the MTT assay (effect% ¼ 100%  cell viability%). The experimentswere repeated three times. B, the CI was assessed using CalcuSyn software to determine drug interaction (additivity, synergism). A CI < 1.0 isconsidered to be synergistic. All values represent mean  SD. C, growth curves of A549 lung adenocarcinoma xenograft in NCr nu/nu athymic mice. Followingan initial growth period of 35 days, group tumor volume reached at least 200 mm3 before treatment (P ¼ 0.5273 between groups). Tumor diameterswere measured every other day. Treatment continued for at least 20 days before the mice were sacriﬁced; , signiﬁcance of P < 0.001 compared with vehiclecontrol or quinacrine only treatment (ANOVA followed by Dunnett multiple comparison test).
addition of quinacrine to erlotinib treatment also signif- phosphorylation in cells treated with either erlotinib or icantly inhibited in vitro cell proliferation, as measured by quinacrine, finding that only erlotinib inhibited AKT or colony formation (Fig. 2C).
ERK activation (data not shown). This result suggests that Next, we measured the effect of quinacrine plus erlo- the effect of quinacrine on cell survival is mediated tinib on cell-cycle progression, using flow cytometry. Both through a pathway other than the PI3K/AKT or MAPK quinacrine alone and combination treatment induced similar levels of marked G1–S and G2–M cell-cycle arrest A recent report suggested that chloroquine can over- in A549 and H1975 cells. This effect was dominated come erlotinib resistance in NSCLC cells overexpressing by the action of quinacrine when the low concentration wtEGFR by inhibiting autophagy (29). Both chloroquine of 1 mmol/L erlotinib was used (Fig. 3A–D).
and quinacrine are known to inhibit autophagy (30), butwhether both of these antimalarial drugs inhibit NF-kB Quinacrine, but not chloroquine, suppresses NF-kB– remains uncertain. To address this issue, we determined driven luciferase activity whether quinacrine or chloroquine inhibits NF-kB activity Next, we analyzed how quinacrine overcomes erlotinib in A549 or H1975, utilizing an NF-kB-luciferase reporter resistance in NSCLC cells. Because the PI3K/AKT and assay. Luciferase expression driven by either constitutive- MAPK pathways are known to be important for cell ly active NF-kB (Fig. 4A) or IL1 treatment (Fig. 4B) was survival and are determinants of EGFR-TKI sensitivity significantly suppressed by quinacrine but not by equal in EGFR-driven cancers (28), we analyzed AKT and ERK concentrations of chloroquine.
Mol Cancer Ther; 13(9) September 2014 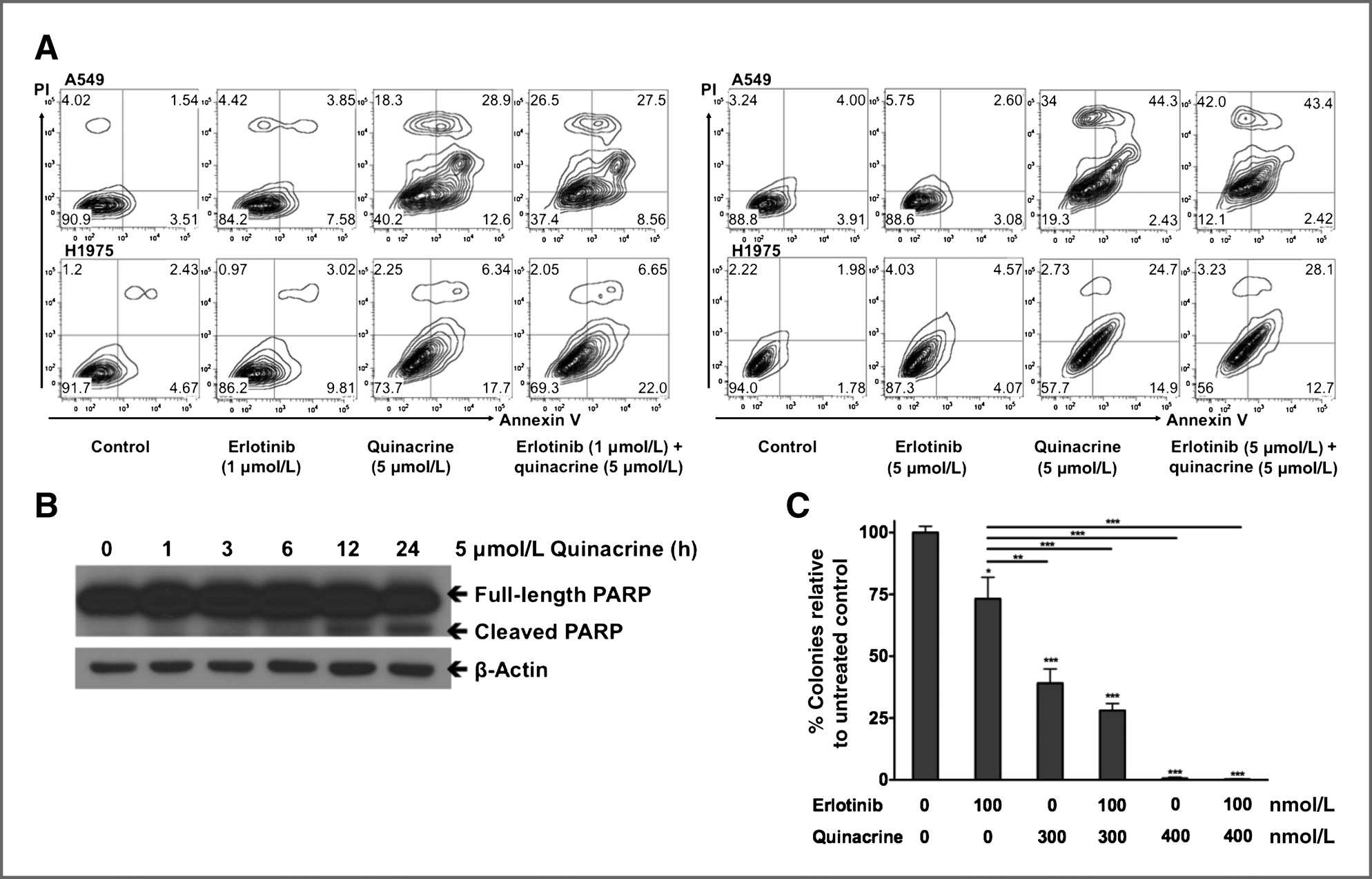 Published OnlineFirst July 15, 2014; DOI: 10.1158/1535-7163.MCT-14-0013 Dermawan et al.
Figure 2. The combination of quinacrine with erlotinib induced in vitro NSCLC cell apoptosis and inhibited cell growth. A, A549 and H1975 cells were untreatedor treated with 1 mmol/L (left) or 5 mmol/L (right) erlotinib, 5 mmol/L quinacrine, or both for 48 hours. Apoptosis was assessed by Annexin V-PI double stainingfollowed by ﬂow-cytometric analysis. B, H1975 cells were treated with 5 mmol/L quinacrine for the indicated time-points. Western analysis was used todetect PARP cleavage as an indicator of apoptosis. C, A549 cells were seeded in 6-well plates and treated with erlotinib, quinacrine, or a combination of both intriplicate at the indicated concentrations. Drugs were replaced every 72 hours. After 14 days, colonies were stained and quantiﬁed. Statistical analysis of thedifferences in colony formation between the treated cells and untreated controls were conducted using one-way ANOVA followed by Bonferroni multiplecomparison test (, P < 0.05; , P < 0.01; , P < 0.001). All values represent mean  SD.
Quinacrine mediates cell killing and overcomes as shown by the ability of quinacrine, but not chloroquine, resistance to erlotinib by targeting FACT to reduce mobility of plasmid DNA (Supplementary Gasparian and colleagues showed that a series of anti- Fig. S1C). To test whether the anticancer activity of quin- cancer compounds including quinacrine suppresses NF- acrine in NSCLC is due to inhibition of FACT, we knocked kB activation by causing chromatin trapping of the FACT SSRP1 down in A549 or H1975 cells. Loss of SSRP1 complex (10). This finding is supported by our observa- significantly decreased cell survival (Fig. 4E and F) and tion that treatment of A549 or H1975 cells with quinacrine, increased sensitivity to erlotinib (Fig. 4G and H) in both but not chloroquine, rapidly depletes SSRP1, a FACT subunit, from the soluble cytoplasmic fraction (Fig. 4Cand D), and led to SSRP1 accumulation in the insoluble The quinacrine and erlotinib combination inhibits chromatin fraction (Fig. 4D), which has also been shown the expression of SSRP1-regulated genes and cell- by Gasparian and colleagues to be an indicator of chro- cycle genes that predict worse survival in patients matin trapping of FACT (10). Because the overall level of with lung adenocarcinoma SSRP1 from whole-cell lysates remained unchanged (Sup- To further elucidate the mechanisms of the effect of plementary Fig. S1A), the decrease of SSRP1 from the combined quinacrine and erlotinib treatment in NSCLC, cytoplasmic fraction was not due to protein degradation.
we performed global transcriptomic profiling of A549 and Quinacrine and chloroquine are structurally related com- H1975 cells treated with 1 mmol/L erlotinib alone, 5 or pounds known to interact with DNA, but with different 3 mmol/L quinacrine alone, or combinations of 1 mmol/L affinities, due to the stronger drug-DNA ring–ring stack- erlotinib and 5 or 3 mmol/L quinacrine for 0, 6, 12, ing interaction with quinacrine, which has a 3-ring acri- or 24 hours, using an Affymetrix microarray platform.
dine moiety, compared with chloroquine, which has a 2- (48-hour treatment samples were available for erlotinib ring quinolone moiety (Supplementary Fig. S1B; ref. 31), alone or combination treatment). Principal component Mol Cancer Ther; 13(9) September 2014 Molecular Cancer Therapeutics 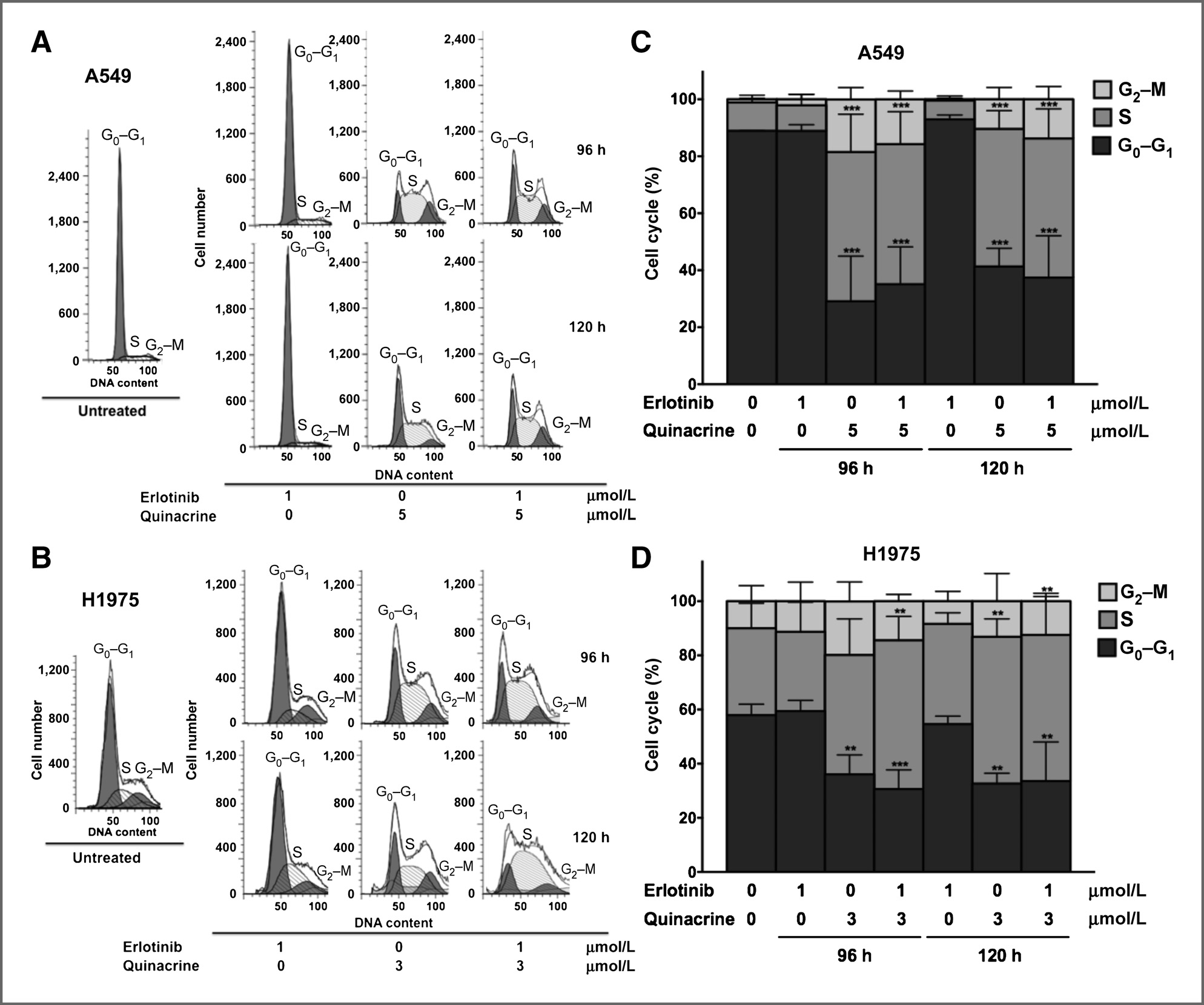 Published OnlineFirst July 15, 2014; DOI: 10.1158/1535-7163.MCT-14-0013 Combination of Quinacrine and Erlotinib in NSCLC Figure 3. The combination of quinacrine and erlotinib inhibits G1–S and G2–M cell-cycle progression. A549 (A and C) and H1975 (B and D) cells were untreatedor treated with erlotinib only, quinacrine only, or erlotinib plus quinacrine for 72 or 96 hours at the indicated concentrations. Cell-cycle analysis was thenperformed using PI-staining followed by ﬂow-cytometric analysis. G1–S and G2–M cell-cycle arrest was determined by quantifying relative G0–G1, S,and G2–M phase percentages. Statistical analysis of the differences in relative cell-cycle phase percentages between the treated cells and untreated controlswere conducted using two-way ANOVA followed by Dunnett multiple comparison test (, P < 0.01; , P < 0.001). The experiment was repeated three times.
All values represent mean  SD.
analysis revealed that, relative to untreated cells at 0 hour, ing our functional analysis showing that quinacrine plus gene expression profiles diverged most significantly with erlotinib induced significant cell-cycle arrest and inhib- increased treatment time (24 and 48 hours) and with ited tumor growth.
quinacrine or combination treatment (Supplementary Next, we analyzed the enrichment of TFBSs among Fig. S2). We next determined genes that were differen- those genes whose expression was significantly affected tially expressed between treatment groups. Differential by quinacrine or by erlotinib plus quinacrine. Comparison gene expression analysis was used to identify genes that of our data with the ChIP-SEQ results for SSRP1-enriched were significantly induced or suppressed by combination genes reported by Garcia and colleagues (16) showed that treatment compared with either single drug treatment many of the genes affected by quinacrine or combination and whose expression levels showed a >2-fold change treatment were regulated by the same transcription fac- relative to 0 hour and significant temporal profiles (Fig. 5A tors that were also involved in regulating expression of and B). Gene ontology analysis showed that genes signif- SSRP1-enriched genes. These transcription factors belong icantly affected by the combination were most highly to the EGR (EGR1), ETS (ELK1, ELK4, GABPA, SPI1), enriched for those encoding proteins involved in cell- MYC (MYC, MYCN), and SP/KLF (SP1, KLF4) families cycle progression or DNA metabolism (Table 1), confirm- (Supplementary Table S1). This result supports our Mol Cancer Ther; 13(9) September 2014 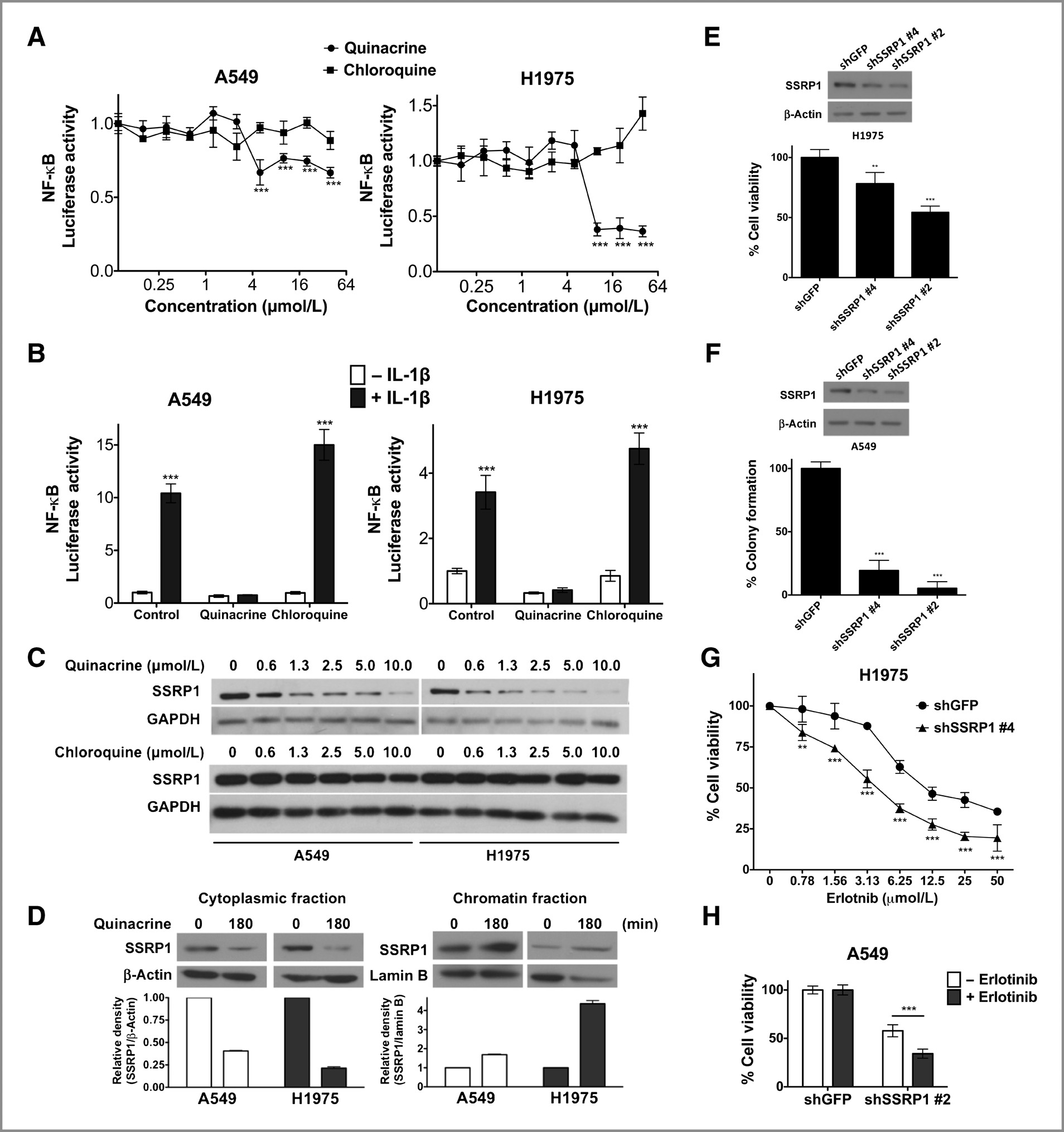 and Developing Academic and Behavioral Interventions for Students with Bipolar KIM KILLU AND R. MARK A. CRUNDWELL Despite significant advances in practices for effectively designing anddelivering instruction for students with disabilities, educators continueto face challenges addressing the needs of students with emotionaland behavioral disorders. Little information is available for educatorson accommodations and modifications that would serve the needs ofthese students and address the unique challenges they present in theclassroom. The educational, social, and behavioral needs of studentswith bipolar disorder are discussed along with suggestions for provid-ing effective accommodations and modifications in the classroom.