Simultaneous determination of four antibiotic residues in honey The corrected CL signals of the spiked samples were As each analyte was spotted in five replicates, the generated normalized and set in the 4-PL calibration function.
CL signal of one analyte is represented by the mean value(MV) of the five single spot signal values and its standarddeviation.
Results and discussion The calculation of the signal intensity based on the ten brightest pixels was chosen instead of integration of all Data evaluation of chemiluminescence microarrays pixels within the grid cell, because we found this methodmore robust regarding the spot morphology. Slight defi- The measurements on the MCR 3 platform result in 2D ciencies in the printing process or non-uniform evaporation images (2×2 pixel binning mode, 696×520 pixels) of the can lead to deviations in the detailed shapes of individual chip surface obtained by a 16-bit CCD camera. The spots from the ideal circular form. In cases with inhomo- resolution of one pixel is 41 μm. The immobilized analyte geneous morphologies the summation of the grey level molecules are visible as bright spots where the CL reaction intensities within the corresponding grid cells leads to has taken place. The brightness (CL intensity) is described bigger variances of the mean CL signal for one analyte than by grey level intensities of single pixels ranging between 0 the evaluation of the ten brightest pixels (see Supp. Fig. and 65535 a.u. (saturation). The camera background noise and Supp. Table ).
of ca. 2000 a.u. was subtracted from the measurement CL Since the quantification of the analyte molecules in the signal of each spot.
sample is based on the indirect proportional CL intensity, Following the indirect competitive immunoassay format, the brightness of the spots is the decisive factor for the the CL intensity is depending on the amount of free analysis. In consequence, the established method is prefer- analytes in the sample. For simple and fast quantification of able for analytical quantitative CL data evaluation, because these antibiotic residues, an efficient method for the the relative standard deviation of the analyte CL intensity is evaluation of the CL intensities is needed.
clearly minimized.
Thus, we developed the software MCRImageAnalyzer The second aim of the data processing was to establish which enables easy and automated processing of the an automated outlier control. In some cases, there are spots measurement raw data. For recognition of the spots we with significantly decreased CL intensities compared with used a grid pattern (see Fig. ), where size and distances of the other spots of the same analyte or missing of the whole the quadratic grid cells are adjustable to the spotting array.
spot. This phenomenon can be explained by the existence For our investigations we created squares with a size of of small bubbles in the measurement flow channel during 25×25 pixels (equivalent to an area of ca. 1 mm2). In light exposure. The occurrence of air bubbles in the flow- relation to the spot diameters, which vary in dependency on injection system could not be completely excluded, since in the analyte between 7 and 13 pixels, these cells are large- this study we did not use any air trap (see Supp. Fig. scaled. The advantage of the big sized grid cells is the Thus, an efficient detection of outlier spots before evalua- entire registration of each spot even if there are drifts in the tion of the analyte CL intensities is needed to minimize spotting array, what means that the spots are not immobi- irregular influences on the dose–response measurements.
lized in perfect horizontal or vertical lines.
For this purpose, the algorithm implemented works on basis For calculation of the CL signal of one spot the software of the standard deviations. The first calculation step is the detects the ten brightest pixels within the corresponding determination of the overall relative standard deviation (R.
square. The average value represents the CL signal of one S.D.). Outliers are defined by a certain R.S.D. limit value.
single spot. Defective pixels with grey level intensities in For our investigations this limit was set to 20%. Exceeding the saturation region are filtered by an implemented of the limit value indicates the occurrence of one or more threshold to exclude artificial influences on the mean value.
outlier spots in the measured analyte column. Because of Fig. 1 Grid pattern for theevaluation of the chemilumines-cence intensities (differentanalytes in x-direction, repli-cates of the same analyte iny-direction). Size of the gridcells is 25×25 pixels 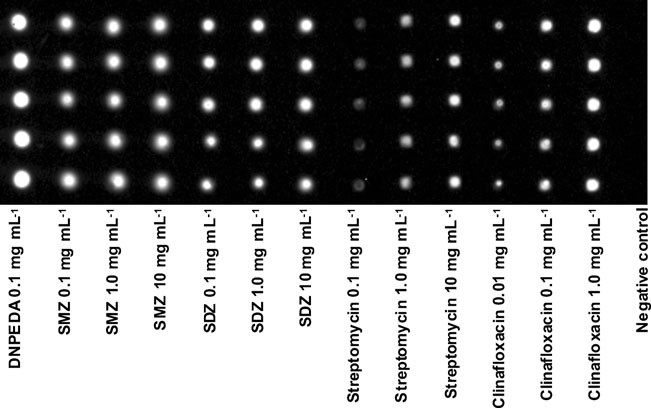