FEBS Letters 582 (2008) 1950–1959 Centromeres: Old tales and new tools P. Vagnarelli*, S.A. Ribeiro, W.C. Earnshaw* Wellcome Trust Centre for Cell Biology, Institute of Cell and Molecular Biology, University of Edinburgh, Swann Building, KingÕs Buildings, Mayﬁeld Road, Edinburgh EH9 3JR, UK Received 3 April 2008; accepted 11 April 2008 Available online 22 April 2008 Edited by Ulrike Kutay point centromeres bind a single microtubule. (b) In regional The centromere is a specialised region of the eukary- centromeres (Shizosaccharomyces pombe, Drosophila melano- otic chromosome that directs the equal segregation of sister chro-matids into two daughter cells during mitosis. In mitosis, the gaster, Gallus gallus, Homo sapiens), the centromeric region kinetochores mediate (1) microtubule capture and chromosome is composed of much longer DNA arrays, and forms a larger alignment at a metaphase plate; (2) the correction of improper kinetochore that interacts with a number of microtubules. Re- microtubule attachments; (3) the maintenance of an active check- gional centromeres evolve naturally in association with charac- point until bi-orientation is achieved by the whole complement of teristic underlying DNA sequences, but are not absolutely chromosomes; (4) the establishment of tension within the centro- restricted to particular DNA sequences. In the diﬀuse centro- mere which, in turn, contributes to silencing of the spindle check- mere of holocentric chromosomes (e.g. Caenorhabditis ele- point and triggers the onset of anaphase.
gans), microtubule-binding kinetochore determinants are In this review, we will analyse how centromeres are organised distributed along the length of the chromosome with respect to chromatin types and arrangements.
Ó In this review, we will analyse how centromeres are organ- 2008 Federation of European Biochemical Societies. Pub- lished by Elsevier B.V. All rights reserved.
ised with respect to chromatin types and arrangements. Forother analyses of how the kinetochore is formed and organised Keywords: Centromere; Kinetochore; CENP-A; Histone we refer the reader to other reviews .
2. In the beginning there was DNA. .
Despite the high conservation of the segregation machinery among eukaryotes, speciﬁc centromere-associated DNAs arehighly divergent and evolve rapidly during speciation. In S.
The centromere is a specialised region of the eukaryotic cerevisiae, the centromeric DNA (CEN sequence) comprises chromosome that directs the equal segregation of sister chro- 125 bp and consists of three elements: CDEI, CDEII and matids into two daughter cells during mitosis. The centromere CDEIII . In S. pombe, the centromere is composed of a appears as a cytologically visible primary constriction on mito- central core element (ctr) of 4–7 kb, and is ﬂanked by imr se- tic chromosomes of higher eukaryotes. The outer surface of quences and otr outer repeats with an overall size range of 30– the centromere is the site where the kinetochore assembles: this 110 kb, depending on the chromosome . In higher represents the major machinery responsible for chromosome eukaryotes, the centromeric DNA is normally characterised segregation and is where interactions with microtubule plus by highly repetitive tandem sequences. Because of this repeti- ends occur. In mitosis, the kinetochores mediate (1) microtu- tive organisation, the full sequence of a natural vertebrate cen- bule capture and chromosome alignment at a metaphase plate; tromere has yet to be achieved Nevertheless, several (2) the correction of improper microtubule attachments; (3) the studies have contributed to understanding the general rules maintenance of an active checkpoint until bi-orientation is for vertebrate centromeric DNA composition and organisa- achieved by the whole complement of chromosomes; (4) the establishment of tension within the centromere which, in turn, In general, human centromeric DNA consists of arrays com- contributes to silencing of the spindle checkpoint and triggers prising 0.2–7 megabases of a 171 bp a-satellite motif repeated the onset of anaphase in tandem head-to-tail arrangement . This a-satellite There are two diﬀerent types of centromeres in eukaryotes: DNA is present at all natural human centromeres .
localised centromeres and diﬀuse centromeres () a-Satellite can be subdivided in two types . Type I forms The former can be subdivided into two variants. (a) In point regular higher order repeat arrays (). Type II is mono- centromeres (Saccharomyces cerevisiae), kinetochore for- meric a-satellite and lacks a regular higher-order organisation.
mation on a discrete stretch of centromeric DNA is rigorously Type I a-satellite DNA is associated with centromere function speciﬁed by the underlying DNA sequence. Kinetochores of and contains a 17 bp motif known as the CENP-B box whichrepresents the binding site for the centromeric protein CENP-B Type II a-satellite DNA usually ﬂanks the type I *Corresponding authors. Fax: +44 (0) 131 650 7100.
array and is often interrupted by LINE and SINE sequences E-mail addresses: (P. Vagnarelli), ed.ac.uk (W.C. Earnshaw).
0014-5793/$34.00 Ó 2008 Federation of European Biochemical Societies. Published by Elsevier B.V. All rights reserved.
doi:10.1016/j.febslet.2008.04.014 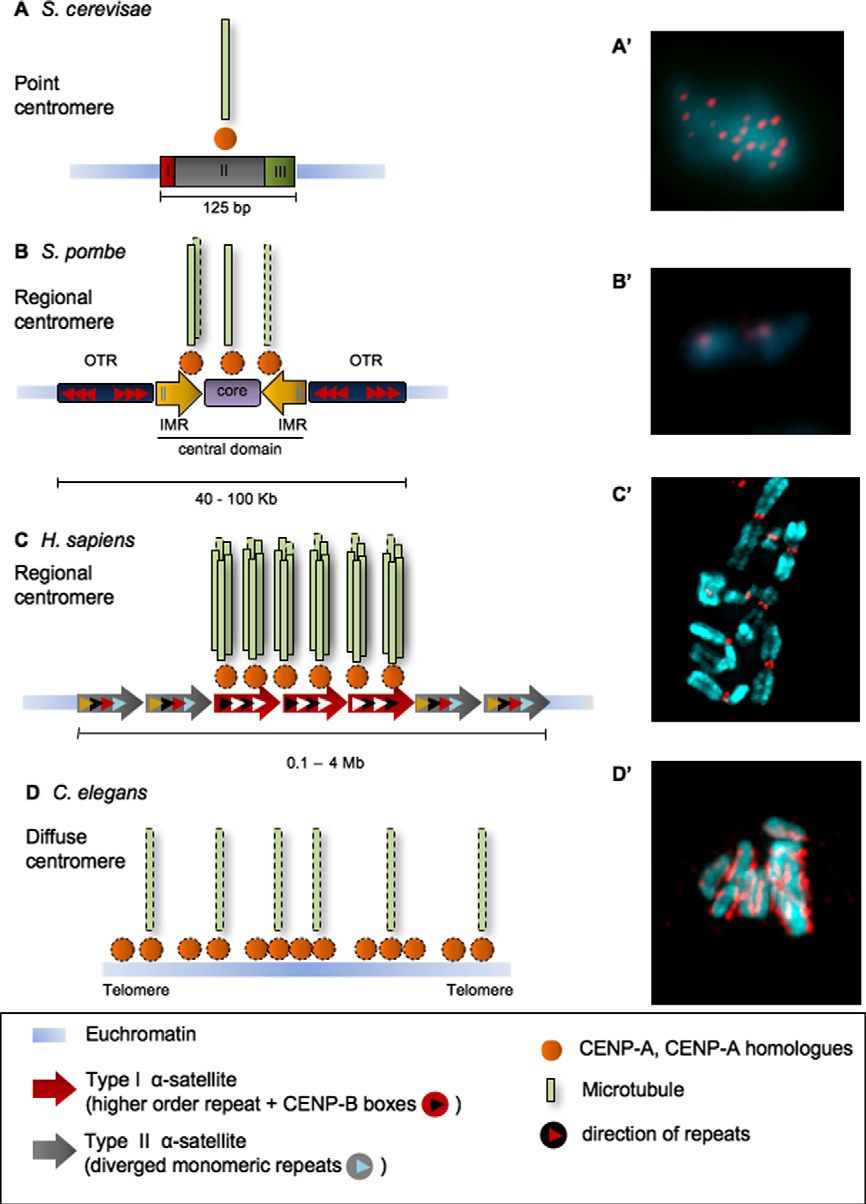 P. Vagnarelli et al. / FEBS Letters 582 (2008) 1950–1959 Fig. 1. Centromere organisation in eukaryotes. The DNA sequence of centromeric regions diﬀers between species but the presence of CENP-A andits homologues (shown in orange) at the kinetochores is conserved. (A) S. cerevisiae has a point centromere that encompasses 125 bp and is composedof three conserved elements (CDEI, CDEII, CDEIII). This is wrapped around a single nucleosome containing the CENP-A homolog Cse4. Eachkinetochore in budding yeast makes only one stable microtubule attachment during metaphase. (A0) Meiotic chromosome spread of S. cerevisiae.
Red - Ndc10 kinetochore protein; Blue - DNA. Picture kindly provided by A. Marston, University of Edinburgh. (B) S. pombe has a regionalcentromere. The kinetochore assembles over the central domain, which contains the non-repetitive core (violet box) where Cnp1 localizes,surrounded by the innermost repeats (IMR; yellow box arrows). The outer repeats (OTR; blue box arrows) ﬂank the central domain and are boundin heterochromatin. Each kinetochore interacts with 2–4 microtubules. (B0) Chromosomes of S. pombe. Red – Cnp1; Blue – DNA. Image kindlyprovided by A. Pidoux, University of Edinburgh. (C) H. sapiens has a more complex regional centromere. Two families of a-satellite DNA (red andgrey arrow boxes) are found only in the centromeric region. Type-I a-satellite (red box arrow) is composed of regular chromosome-speciﬁc higher-order repeating units, is characterized by the presence of CENP-B boxes (white triangles), and associates with CENP-A. Type-II a-satellite (grey boxarrows) consists of diverged alphoid monomer units (diﬀerent coloured triangles). Between 20 and 30 microtubules attach to each humankinetochore. (C0) Partial metaphase spread of human chromosomes. Red – CENP-A; Blue – DNA. (D) C. elegans chromosomes have diﬀusecentromeres. CENP-A colocalizes with microtubule binding sites along the length of each chromosome. (D0) Metaphase chromosomes of C. elegans.
Red – Knl1; Blue – DNA. Image kindly provided by R. Gassmann, University of San Diego.
If the DNA sequence itself has not thus far given clues to the This was ﬁrst revealed by the analysis of stable dicentric foundation for either the establishment or the maintenance of chromosomes . These chromosomes are the products a functional centromere, the analysis of ‘‘abnormal centro- of duplications or more complex chromosome re-arrangements meres'' identiﬁed by classical cytogenetics has opened the ﬁeld and contain two regions of sequence normally found within to the concept that epigenetic factors are involved in the cen- functional centromeres (they can be either from the same or tromeric speciﬁcation and propagation.
diﬀerent chromosomes). In the case of dicentric chromosomes 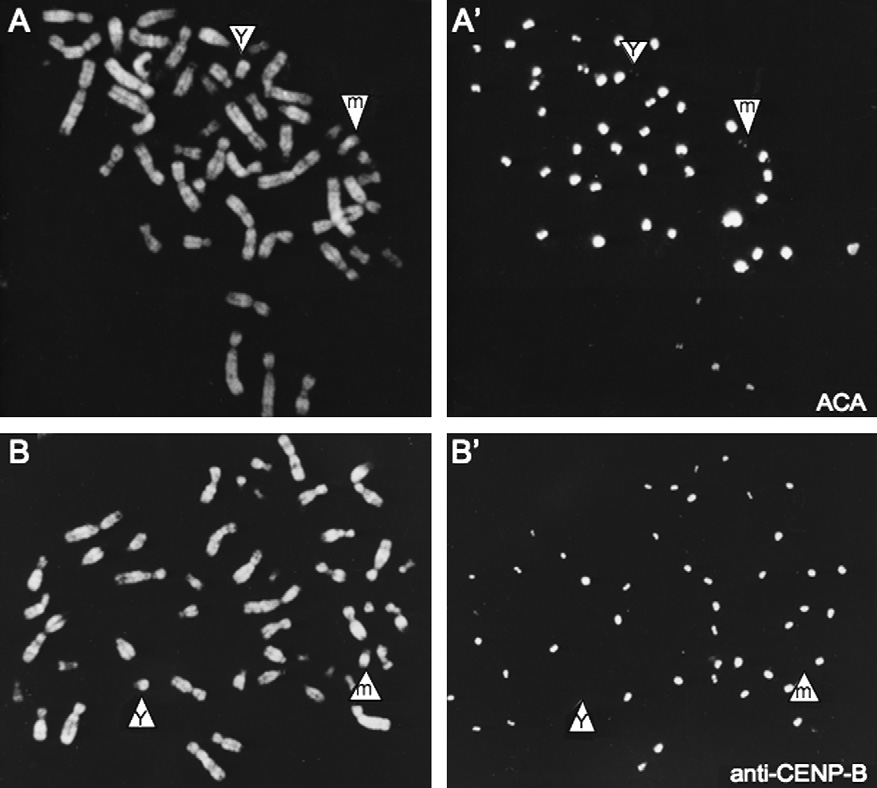