A small molecule enhances RNA interference andpromotes microRNA processing Ge Shan1,6, Yujing Li1,6, Junliang Zhang2, Wendi Li1, Keith E Szulwach1, Ranhui Duan1,Mohammad A Faghihi3, Ahmad M Khalil3, Lianghua Lu2, Zain Paroo4, Anthony W S Chan1,Zhangjie Shi5, Qinghua Liu4, Claes Wahlestedt3, Chuan He2 & Peng Jin1 Small interfering RNAs (siRNAs) and microRNAs (miRNAs) are sequence-specific post-transcriptional regulators of geneexpression. Although major components of the RNA interference (RNAi) pathway have been identified, regulatory mechanismsfor this pathway remain largely unknown. Here we demonstrate that the RNAi pathway can be modulated intracellularly by smallmolecules. We have developed a cell-based assay to monitor the activity of the RNAi pathway and find that the small-molecule enoxacin (Penetrex) enhances siRNA-mediated mRNA degradation and promotes the biogenesis of endogenous miRNAs. Weshow that this RNAi-enhancing activity depends on the trans-activation-responsive region RNA-binding protein. Our results provide a proof-of-principle demonstration that small molecules can be used to modulate the activity of the RNAi pathway. RNAienhancers may be useful in the development of research tools and therapeutics.
RNAi is a well-conserved mechanism that uses small noncod- ing RNAs to silence gene expression post-transcriptional A chemical screen to identify small molecules that enhance RNAi Gene regulation by RNAi has been recognized as one of the major To alter the activity and gain insight into the regulation of the RNAi regulatory pathways in eukaryotic cellThe endogenous small pathway, we developed a reporter system to monitor RNAi activity.
RNAs can shape diverse cellular pathways, including chromo- In this system, a stable cell line derived from human embryonic some architecture, development, growth control, apoptosis and stem kidney (HEK293) cells, expressing a gene encoding 293-EGFP lishing Gr
(enhanced green fluorescent protein), was infected with a lentivirus RNAi operates via two post-transcriptional mechanisms: targeted expressing a short hairpin RNA (shRNA) that is processed into siRNA mRNA degradation by siRNA and suppression of translation/degrada- specifically targeting EGFP mRNA (Fig. 1a)The transduction led to tion by miRNA. The RNAi mechanism has been co-opted by reduced levels of EGFP in 293-EGFP cells; these cells are called RNAi- researchers and has achieved broad utility in gene-function analysis, 293-EGFP in the experiments following. To verify that the siRNAs drug-target discovery and validation, and therapeutic developmen against EGFP reduced EGFP expression, we transfected the clones with 2008 Nature Pub
Given the pivotal roles of endogenous small RNAs in diverse biological 2-O-methyl-RNAs, which has been shown to block the activity of the pathways and the broad application of RNAi in biology and lentivirus-encoded EGFP siRNAand we observed increased GFP medicine, understanding the mechanism of the RNAi pathway is of expression (Fig. 1a). To reduce variation between experiments, we great importance.
isolated individual cell clones with moderate reductions in GFP Over the last several years, key protein components involved expression and used them to screen for both inhibitors and enhancers in the RNAi pathway have been identified; however, little is known of the RNAi pathway.
about the regulation of the RNAi pathway itself. Here we describe a Using this system, we screened a collection of 2,000 US Food and chemical biology approach to modulate the RNAi pathway and report Drug Administration–approved compounds and natural products the identification of a small molecule that enhances RNAi and and identified a small molecule named enoxacin that enhanced promotes the biogenesis of miRNA by facilitating the interaction siRNA-mediated mRNA degradation. This small molecule was between trans-activation-responsive region RNA-binding protein enoxacin (Fig. 1a). Enoxacin increased siGFP-mediated gene (TRBP) and RNAs. Our results provide a proof-of-principle demon- knockdown mediated by siRNA against EGFP in our cell-based stration that small molecules can be used to understand what cellular reporter system in a dose-dependent manner, with a median effective factors affect the activity of the RNAi pathway.
concentration (EC50) of B30 mM, whereas it had no effect on the 1Department of Human Genetics, Emory University School of Medicine, 615 Michael St., Atlanta, Georgia 30322, USA. 2Department of Chemistry, The University ofChicago, 929 East 57th St., Chicago, Illinois 60637, USA. 3Department of Molecular and Integrative Neurosciences, The Scripps Research Institute, 5353 Parkside Drive,Jupiter, Florida 33458, USA. 4Department of Biochemistry, University of Texas Southwestern Medical Center, 5323 Harry Hines Blvd., Dallas, Texas 75390, USA.
5The College of Chemistry, Peking University, 202 Chengfu Rd., Beijing, 100871, P.R. China. 6These authors contributed equally to this work. Correspondence should beaddressed to P.J. ( Received 8 January; accepted 24 June; published online 20 July 2008; NATURE BIOTECHNOLOGY ADVANCE ONLINE PUBLICATION 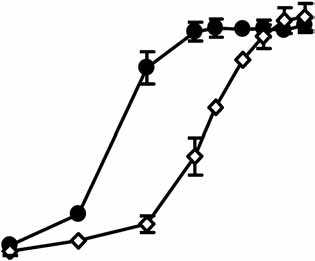 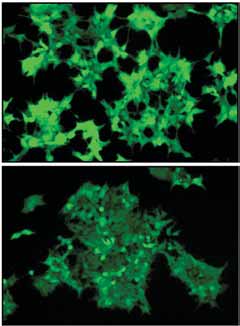 293-EGFP RNAi-293-EGFP Enoxacin (50 µM) +Enoxacin (50 µM) Library of 2,000 small molecules Relative quantification of EGFP protein (%) Enhancer of RNAi (enoxacin) Enoxacin (50 µM) Figure 1 Identification of a small molecule enhancing RNAi through a chemical screen. (a) HEK293 cells stably expressing EGFP (293-EGFP) were infected with lentivirus producing shRNA against EGFP (shRNA- EGFP); the resulting RNAi-293-EGFP cells with reduced GFP expression mRNA knockdown (%) were isolated. The RNAi-293-EGFP cells transfected with 2-O-methyl Relative GAPDH mRNA RNA against the GFP siRNA are shown in the middle with the recovery 10–13 10–12 10–11 10–10 10–9 10–8 10–7 of GFP expression. A mutant 2-O-methyl RNA against the GFP siRNA is BACE1 siRNA concentration (M) shown on the right as a negative control. The RNAi-293-EGFP cells were used for a chemical screen, which led to the identification of an RNAi shVector + enoxacin enhancer (enoxacin). The chemical structure of enoxacin is shown shGAPDH + enoxacin on the right. (b) Enoxacin enhances shRNA-EGFP-mediated genesilencing. The GFP protein levels were detected by western blot analysis using anti-EGFP antibody (right), with GAPDH as a loading control. The quantification is shown below. Fluorescence images of RNAi-293-EGFP cells without (top) or with (bottom) enoxacin are shown on the left (exposuretime is different from panel a). Values are mean ± s.d. (c) Enoxacin enhances shGAPDH-mediated gene silencing. Relative GAPDH mRNA levelsin cells are determined by quantitative RT-PCR. Values are mean ± s.d. for triplicate samples. *, P o 0.001. (d) Enoxacin potentiates syntheticsiRNA-induced knockdown of BACE1. Synthetic siRNA against human BACE1 was transfected at a range of concentrations, from 1 pM to 20 nM, inHEK293FT cells. Knockdown of BACE1 mRNA was graphed as a percentage of mock-treated samples in the presence or absence of enoxacin. Values are mean ± s.d. for triplicate samples.
cells expressing GFP only (Fig. 1b and Supplementary Fig. 1).
RNAi-enhancing activity of enoxacin is structure dependent Importantly, enoxacin was relatively nontoxic, even at the high Enoxacin belongs to a family of synthetic antibacterial compounds lishing Gr
concentration of 150 mM, which is lower than a clinical doseSimilar based on a fluoroquinolone skelet. Fluoroquinolones have a broad enhancement of gene knockdown mediated by GAPDH-specific antimicrobial spectrum and are very successful at treating a variety of shRNA (shGAPDH) in cells stably expressing an shGAPDH was also bacterial infection. As a family, fluoroquinolones target bacterial observed upon enoxacin treatment (Fig. 1c). We also tested other type II topoisomerases, such as DNA gyrase in Gram-negative bacteria shRNAs against GFP (different from the GFP used in our reporter and DNA topoisomerase IV in Gram-positive bacter; these agents system), luciferase and Fmr1, and again observed comparable do not inhibit eukaryotic topoisomerase II. Enoxacin has been used to increases (Supplementary Fig. 2), indicating that the effect of enox- treat bacterial infections ranging from gonorrhea to urinary tract 2008 Nature Pub
acin on RNAi is indeed universal.
infectionClinically, side effects have been minimal in adult There are currently two means of harnessing the RNAi machinery To test whether the quinolone family in general acts to enhance the to induce specific suppression of gene expression in cells: shRNAs RNAi pathway, we examined the effects of several other quinolones, and siRNA duplexes. Hence we also questioned whether enox- both commercially available and synthetically modified molecules acin would have any effect on siRNA duplex–induced RNA (enoxacin-V1-3), using our RNAi GFP reporter system (Fig. 3a).
We found that enoxacin consistently gave rise to a left-shift of We found that two of these compounds (ciprofloxacin (Cipro) and the concentration-response curve to an siRNA specifically target- norfloxacin (Noroxin)) have substantial RNAi-enhancing activity; ing human BACE1 mRNA (Fig. 1d). Importantly, the levels of however, these two molecules are less effective than enoxacin itself unrelated transcripts, such as those encoding PINK-1 and actin, (Fig. 3b). Most other commercially available quinolones tested had were not changed, suggesting that enoxacin did not induce either much less or almost no RNAi-enhancing activity. The addition nonspecific effects (data not shown). We also observed similar of sterically blocking groups to the C-3 carboxylate (enoxacin-V1 and enhancement of knockdown efficiency by enoxacin using siRNA enoxacin-V3) and the piperazine terminal nitrogen atom of enoxacin duplexes against different genes in various cell lines (Fig. 2).
(enoxacin-V2) reduced the RNAi-enhancing activity. Substitutions at Furthermore, by comparing the gene knockdown efficiency among the N-1, C-6 and C-7 positions of enoxacin also interfered with its different concentrations of siRNA duplex used for transfection, we RNAi-enhancing activity. The sensitivity of the RNAi-enhancing found that enoxacin substantially reduced the siRNA dosage required activity of enoxacin to chemical substitution suggests that it forms a to achieve comparable knockdown efficiency (Figs. 1d and 2). These specific complex distinct from the known targets of quinolones.
data together suggest that the small-molecule enoxacin enhances RNAi To exclude the possibility that enoxacin enhances RNAi activity by induced by either shRNAs or siRNA duplexes and substan- increasing the expression of one or more components in the RNAi tially reduces the dosage required to achieve gene knockdown in pathway, we first examined the protein levels of multiple components mammalian cells.
in the RNA-induced silencing complex (RISC) and found no ADVANCE ONLINE PUBLICATION NATURE BIOTECHNOLOGY 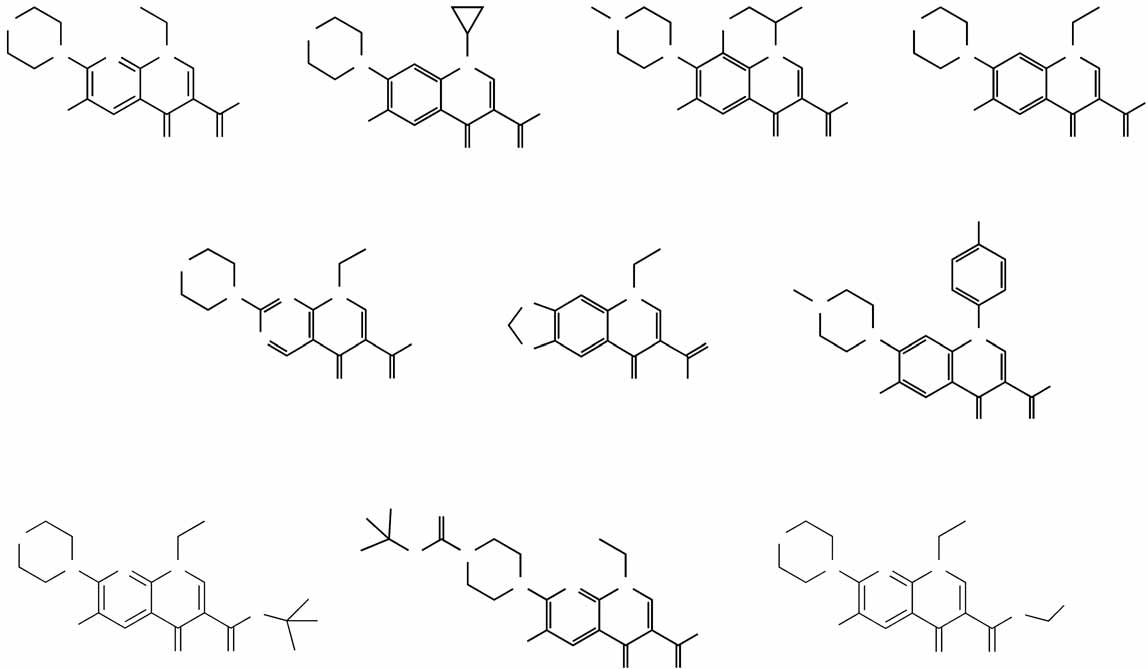 An Information Brochure by The Gut Foundation Diverticular diseaseWhat is it?Diverticular disease affects the large bowel. The disease is usually confined to the sigmoid colon although it can involve all the colon. Diverticula are small pockets or sacs that protrude beyond the wall of the bowel and vary in size from that of a pinhead to a small grape. The mouth of the diverticulum is often narrow giving it a teardrop shape. The local bowel wall is thickened.