Intratympanic Therapy inMeniere's Disease Mr Simon Lloyd,
Consultant
Neuro-otologist,
University Department
of Otolaryngology,
Central Manchester NHS
Foundation Trust,
Oxford Road,
The principle of delivering a drug to the middle ear through the tympanic membrane is not new with reports in the literature from the nineteenth century regarding its efficacy as a treatment for ‘catarrhal affections of the middle ear'.1,2 However, the use of this techniquein the treatment for inner ear disorders Manchester, M13 9WL, UK.
has only been popularised over the past 20 years particularly in treating Meniere's Disease and more latterly sudden sensorineural hearing loss. This article focuses on Email: [email protected] intratympanic therapies used in the treatment of Meniere's Disease.
Declaration of
Competing Interests
None declared.
Current delivery methods
sponge running through the central passage Intratympanic therapies aim to deliver a and this can be slid down to come in to given pharmacological agent to the inner ear contact with the round window niche.
via the tympanic cavity and in so doing opti- Drugs can then be delivered into the mise inner ear dosage and reduce the risk of external ear canal and they soak the sponge developing systemic side effects. However, and diffuse down to the middle ear (Figure delivery of drugs to the inner ear is chal- lenging. Systemic delivery has significant limi- Some authors have also described the use tations with variable penetration due to the of fine catheters placed adjacent to the presence of a blood-inner ear barrier as well round window membrane via the tympanic the risk of significant side effects. Similarly, membrane in order to allow prolonged or more direct access to the inner ear is limited repeated drug delivery. Pump systems that because the structures within the labyrinth may be either partly or fully implantable may are contained within hard bone and are only be used to deliver the drug. However, this accessible through the middle ear via the technique is associated with a high propor- round and oval windows. Access is made all tion of complications, particularly accidental the more difficult by the fact that minor dislocation of the catheter, and has not trauma to the membranous structures of entered widespread use in clinical practice.
the inner ear can result in acute labyrinthinefailure. In addition, there are a number of Current intratympanic drug
potential drawbacks to current intratym- treatments in Meniere's Disease
panic drug delivery strategies including loss There are currently two main groups of drug of drug down the Eustacian tube as well as used to treat Meniere's Disease via the poorly understood intracochlear pharmaco- intratympanic route. They are aminoglyco- kinetics. Some have also expressed concern side antibiotics and steroids.
regarding poor absorption of drug throughthe round window. However, a recent study by Bird et al. has suggested that the dose Aminoglycoside antibiotics, particularly delivered to the cochlea following intratym- gentamicin, are commonly used to treat panic therapy is 260 times greater than the gram negative bacterial and some types of dose delivered by intravenous therapy.3 mycobacterial infection. One of their side There are a number of different methods effects is ototoxicity and this is the basis for of delivering drugs intratympanically.4 The their use in Meniere's Disease.
most common method of intratympanic Most are predominantly cochleotoxic, drug delivery is injection through the resulting in sensorineural hearing loss in a tympanic membrane (Figure 1). A typical significant proportion of patients. However, regimen for this type of administration is gentamicin is predominantly vestibulotoxic shown in Figure 2.
and is less likely to result in hearing loss.
An alternative method of drug delivery is The mechanism of toxicity is unclear.
the Silverstein wick.5 This consists of a From pathology studies it would appear that grommet that is inserted into the eardrum in they induce hair cell death within the the posteroinferior quadrant over the round cochlea at high doses.6 There is probably a window niche. The grommet has a porous preference for outer hair cells. At lower does, 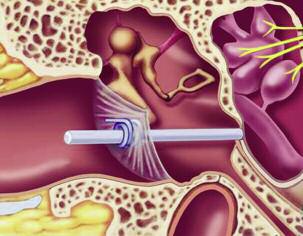