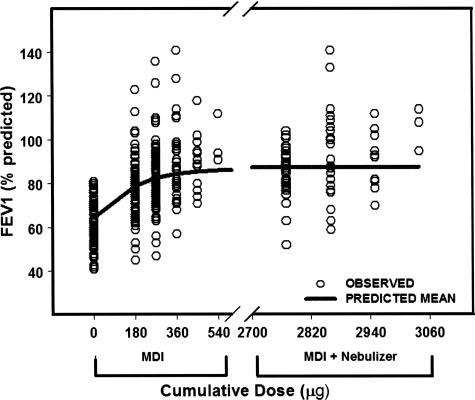 moderate persistent asthma.1 By patient report onthe day of the study visit, 26 patients (8 AfricanAmericans) stated that they used two inhalations ofalbuterol on a regular schedule either once daily(n ⫽ 5), twice daily (n ⫽ 5), three times daily(n ⫽ 8), or four times daily (n ⫽ 8) [African Ameri-cans vs whites, p ⫽ 0.40]. All other patients reportedusing albuterol at two inhalations on an as-neededbasis. Quantification of SABA use during the weekimmediately prior to the study day was not obtained.
Forty percent of participants were using low-doseICS, 14% were using medium-dose ICS, and 2%were using high-dose ICS; one pediatric patient wastreated with prednisone every other day.1 All partic-ipants had been using ICS for at least 3 months, butthe majority had used ICS for ⱕ 2 years. Clinicalcharacteristics were similar between users and non-users of ICS (baseline FEV Figure 2. Fitted dose/response after cumulative doses of albu- 1 percentage of predicted [p ⫽ 0.89]; duration of asthma [p ⫽ 0.89]; and fre- terol (solid line). Open circles represent individual patient re-sponses. Response is percentage of predicted FEV quency of SABA use [p ⫽ 0.48]). Thirty-two patients lative doses of albuterol administered from the MDI were 180 were using a theophylline product, and 1 patient was ␮g, 270 ␮g, 360 ␮g, 450 ␮g, and 540 ␮g; and the cumulative using cromolyn sodium. Of these 32 patients, 21 doses from the MDI plus nebulizer were 2,770 ␮g (270 ␮g MDI plus 2,500 ␮g nebulized); 2,860 ␮g (360 ␮g MDI plus 2,500 ␮g patients were also using an ICS. All participants had nebulized); 2,950 ␮g (450 ␮g MDI plus 2,500 ␮g nebulized); and long-standing asthma with an asthma diagnosis for 3,040 ␮g (540 ␮g MDI plus 2,500 ␮g nebulized).
64%, 63%, and 56% of their lives in the age groups ⬍ 20 years, 20 to 45 years, and 46 to 65 years, whites and African Americans demonstrated no dif- ference in ED50, but Rmax was 91.9% of predictedFEV1 in whites and 82.4% of predicted in African Modeled Data Americans (p ⫽ 0.0004) [Fig 3]. Consistent with ourmodeled data of difference in Rmax between ethnic Population modeling of the albuterol dose/re- groups, whites had an absolute improvement in sponse relationship is shown in Figure 2. A Hill percentage of predicted FEV coefficient (␥) of 2 was found to best fit the data and 1 of 26.7% from base- line after receiving maximum albuterol doses had lowest objective function value. In preliminary compared with 16.6% in African Americans studies, several pharmacodynamic models were fit- (p ⬍ 0.0003). Using the modeled parameters, two ted to the albuterol dose vs FEV1 relationship. The inhalations of albuterol (180 ␮g) would increase sigmoid Emax model with ␥ ⫽ 2 provided the best fit percentage of predicted FEV to the data. Subsequent analyses setting ␥ as a 1 by 11.7% in African Americans vs 17.5% in whites. Baseline percentage parameter resulted in unreasonable pharmacody- namic and variability estimates suggesting that fitting was not different between whites and African Americans (65.2 ⫾ 11.4% vs the sigmoid Emax model with four parameters re- 65.8 ⫾ 8.3%, respectively; p ⫽ 0.81), nor was du- sulted in overparameterization. Therefore, we set ration of asthma (p ⫽ 0.31) nor the proportion 2 and fit the model with thee parameters. The using ICS (p ⫽ 0.61).
modeled parameters, ED50 of 141 ␮g and Emax of24.0%, predict that the standard of administeringtwo inhalations of albuterol (180 ␮g) is sufficient to Table 2—Population Modeling of Albuterol
produce a 14.4% increase in percentage of predicted FEV1 from baseline and to reach 60.0% of Emax (Table 2). There were 40% and 56% variabilities associated with ED50 and Emax, respectively.
Incorporating gender, age, years diagnosed with asthma, and current ICS use (yes/no) as covariates 64.3% of predicted FEV1 87.6% of predicted FEV1 for R0, Rmax, and ED50 did not account for signifi- 24.0% of predicted FEV1 cant between-participant variability. Including eth- nicity as a covariate on Emax decreased the interpa- tient variability by 1% (p ⬍ 0.05). Modeled data for Residual error (SD) 3.2% of predicted FEV1 Original Research Downloaded From: http://publications.chestnet.org/ on 10/07/2016 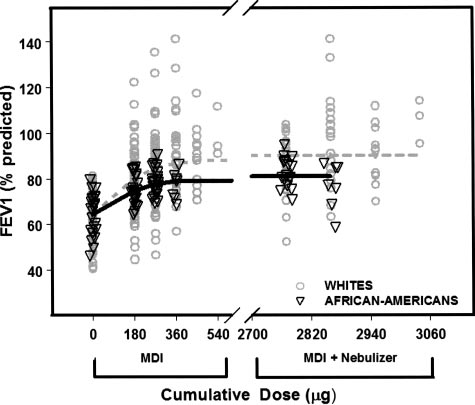