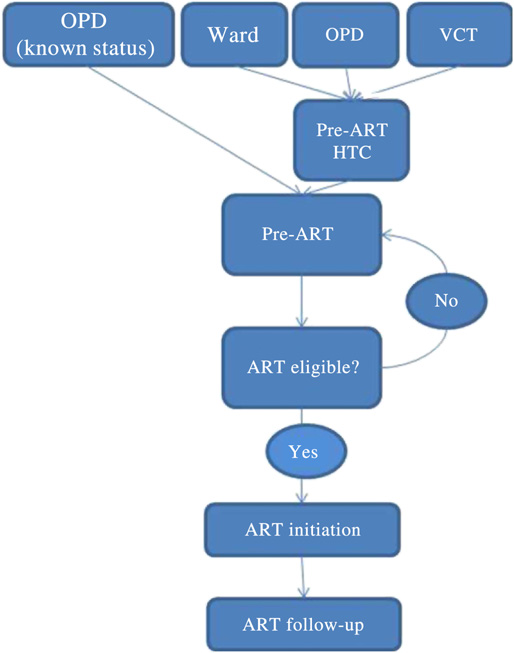 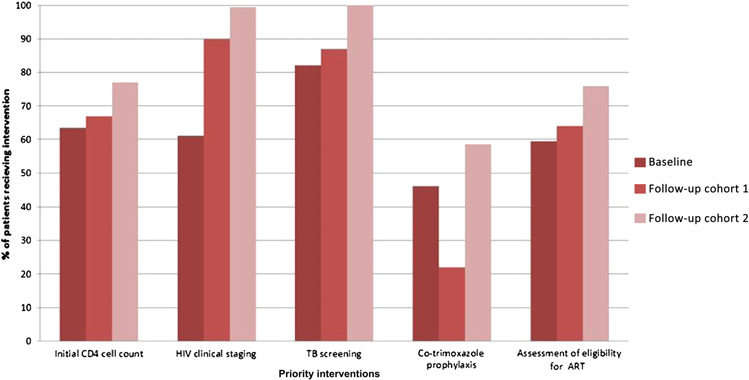 Pre-ART service evaluation Comparison table of assessment for ART eligibility and initiation between the three groups Number assessed for ART/all patients attended clinic, N (%)Number assessed eligible for ART/ number assessed for ART, N (%)Number of eligible patients initiated on ART/number assessed as eligiblefor ART, N (%)Median time between eligibility and ART initiation (range) (days) ART, antiretroviral therapy.
testing data (some of which is anonymous) to pre-ART Over the study period, the proportion of patients information. Ideally, we would have followed cohorts of assessed as eligible has increased. This reflects differ- patients from testing to initiation, but this was not ences in health of the groups, as well as changes in possible. Data were collected from the register in the international and national guidelines on CD4 threshold ART department, which is of patients with a known for initiation. The reasons for increasing numbers of diagnosis and not those with a new diagnosis. The patients with advanced immunodeficiency in groups 1 people in this study are therefore likely to have more and 2 are unclear. This should not have affected the key advanced immunodeficiency and may not be typical of outcomes of this study: the proportion of patients all patients with HIV/AIDS. The data used excludes assessed for ART and the proportion of those eligible those who were pregnant or those on TB treatment as who were initiated.
those services also run parallel pre-ART services. Strati-fying the patient by source of referral and/or testing Lessons from implementing pre-ART care (eg, Voluntary counselling and Testing (VCT) or ward or Implementing a coherent HIV pathway across multiple outpatients) would be useful, but that information was programmes within the hospital was a complicated not routinely recorded.
process. The overall service includes HIV-positive The differing group sizes resulted from data that had patients in hospital TB and Prevention of Mother to been previously entered as part of a pilot evaluation. The Child Transmission (PMTCT) programmes in addition researchers opted to use all the available data, rather to the pathway described above. Integration of separate than ignoring any of it. The impact of a larger group 2 is vertical national programmes (eg, PMTCT, TB, ART) at unclear. A larger group 2 (ie, spanning a longer time a district level to provide a coherent service and clear period) may have increased the difference between pathway is challenging. The recent introduction of groups 1 and 2 but lessened the difference between a national integrated package of care for PLHIV may aid groups 2 and 3.
Comparison of priority interventions received by the threegroups. Initial CD4 cell count,p¼0.002; HIV clinical staging,p¼0.001; tuberculosis (TB)screening, p<0.001;co-trimoxazole, p<0.001,assessment of eligibility forantiretroviral therapy (ART),p¼0.001.
Burtle D, Welfare W, Elden S, et al. BMJ Open 2012;2:e000195. doi:10.1136/bmjopen-2011-000195 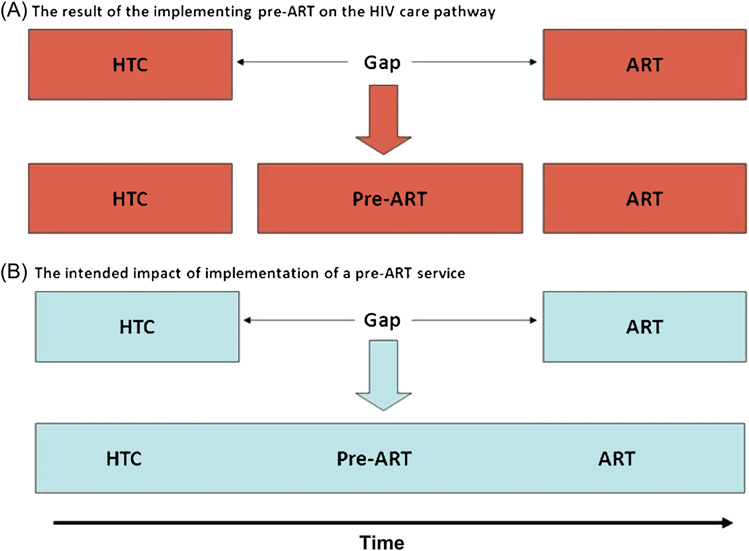 Uncaria tomentosa Family: Rubiaceae Common Names: cat's claw, unha de gatoParts Used: Vine bark, root Description Cat's claw (U. tomentosa) is a large, woody vine that derives its name from hook-like thorns that grow along the vine and resemble the claws of a cat. Two closely related species of Uncaria are used almost interchangeably in the rainforests: U. tomentosa and U. guianensis. Both species

BURN WOUND CARE WITH Skin acts as a barrier against infection. CLEANING AND DRESSING YOUR Once you lose your skin, it increases your BURN WOUNDS chance for infection to occur. Taking careof your burn is very important. The • Take pain medication about 30 minutes before following are ways to prevent infection and