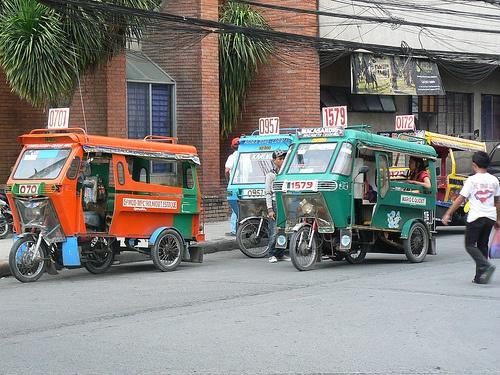 Electric Vehicles Electric vehicles (EVs) run by drawing currents from rechargeable batteries and photovoltaic arrays, among other sources of e lectric current, instead of employing a gasoline- or diesel-run internal combustion engine (ICE) (Department of Energy), thereby reducin g the dependence on fossil fuels. The shift to alternative fuels such as electricity generated from renewable energy is becomin g more essential as ―energy use in non-OECD Asia is expected to increase 118% by 2035, and harmful greenhouse gas emissions from the transport sector are projected to increase more than 200% worldwide by 2030‖ (ADB). Apart from private vehicles, electricity -runpublic transit can also replace conventional nodes that are in operation in the form of electric minibuses or jeepneys (―e -jeepneys‖), electric three-wheelers (―e-tricycles‖), and electric bicycles. As the population of motorcycles in many Asian cities is high, w ith some employing old and environmentally damaging two-stroke engines no less, electric bicycles could save a significant amount of exhaust emissions. In some way, it replicates the efficiency of a motorbicycle in terms of speed and, at the same time, of a bicycle in terms of clean fuel source and of the physical activity (Dora, et. al 2011).
Pre-requisites and Challenges EVs are not precisely zero-emission vehicles and their effectiveness in cutting down vehicular emissions substantially depends on the ―materials used, the driving conditions and, most importantly, the carbon intensity of their electricity sources‖ (Gonzales 2012). Several countries generate their electricity from coal power plants, while some countries generate from renewable energy such as in Brazil where renewable hydropower is a common source of electricity (Kolke & Walsh 2005). This raises concern due to the possible increase in energy demand and due to the shifting of the burden to electric utilities. One important pre-requisite of electric vehicles is the availability of power on the electricity grid for the batteries to be charged. While commonly believed to be so as electricity demand is low at night when Tricycles in Cagayan de Oro batteries are being charged and that vehicle population growth will be Source: Constantine Agustin / Flickr / Creative Commons slow enough for grid capacity planning to respond adequately (Hadley 2006), potential to overload an electricity grid due to high penetration of these vehicles remains to be a concern. It is essential that data on Environmental Impacts electric grid capacity, electric private cars, electric public transport nodes, energy consumption and power requirements, and estimated market penetration of electric vehicles, among others, be available. As EVs are often regarded as having zero EVs run on batteries that need recharging, one challenge that this emissions; however, a life cycle analysis technology faces is the mile range, which is the distance that the shows that its production phase emits more vehicle can run on a single charge. Some EVs have 30–100 mile range emission than that of a vehicle powered by (48.28–160.93 kilometer range), although some EVs that are to be ICE, although it is offset during its released are believed to run 300 miles (482.80 kilometers) before the operational life if it generates electricity next charge (Union of Concerned Scientists). Another possible from sustainable sources. The primary challenge would be the investment needed for this technology. A hybrid environmental benefit of driving an EV is bus costs $200,000 on the average and its fuel economy savings must the reduced dependency on crude oil and be 40% to pay off its cost (Udasin 2013).
reduced GHG emissions, although this will highly depend on the source of electricity generation. With an average occupancy of 2.5, gasoline-powered cars emit 130–170 CO -equivalent emissions per passenger- kilometer, diesel-powered cars emit 85–120 CO -equivalent emissions per passenger-kilometer, and natural gas-powered cars emit 100–135 CO - equivalent emissions per passenger-kilometer. 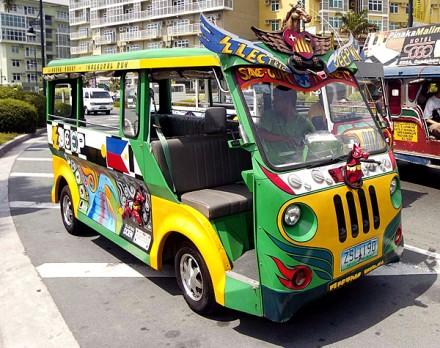