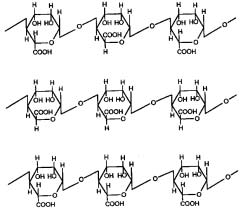 linking structure might control a highly water-soluble drug release for 24 h13.
In a comparative study, alginate formulation appeared to be better than the polylactide-co-glycolide (PLG) formulation in improving the bioavailability of two clinically important antifungal drugs-clotrimazole and econazole. The nanoparticles were prepared by the emulsion-solvent-evaporation technique in case of PLG and by the cation-induced controlled geliÞ cation in case of alginate14.
Starches:
It is the principal form of carbohydrate reserve in
green plants and especially present in seeds and
underground organs. Starch occurs in the form of
granules (starch grains), the shape and size of which
Fig. 1: Structure of alginic acid.
are characteristic of the species, as is also the ratio of and angina pectoris. The microspheres were prepared the content of the principal constituents, amylose and using emulsification-cross linking method. In vivo amylopectin. A number of starches are recognized for studies indicated signiÞ cantly improved therapeutic pharmaceutical use (Þ g. 2). These include maize (Zea efficacy of metoprolol from microspheres, with mays), rice (Oryza sativa), wheat (Triticum aestivum), sustained and controlled inhibition of isoprenaline- and potato (Solanum tuberosum)15. induced tachycardia as compared with oral and nasal administration of drug solution11.
ModiÞ ed starch was tested for general applicability of a new pregelatinized starch product in directly A new insert, basically consisting of alginates with compressible controlled-release matrix systems. It different hydroxyethylcellulose content was developed was prepared by enzymatic degradation of potato to maintain a constant drug level over a certain period starch followed by precipitation (retrogradation), in the eye, which cannot be achieved by conventional Þ ltration and washing with ethanol. The advantages eye drop application. This study showed good tolerance of the new calcium-alginate-insert applied to the ocular surface for controlled drug release12. In order to achieve 24 h release profile of water soluble drugs, sodium alginate formulation matrices containing xanthan gum or zinc acetate or both were investigated. The release of the drug from the sodium alginate formulation containing only xanthan gum was completed within 12 h in the simulated intestinal ß uid, while the drug release from the sodium alginate formulation containing only zinc acetate was completed within 2 h in the same medium. Only the sodium alginate formulation, containing both xanthan gum and zinc acetate achieved a 24 h release proÞ le, either in the simulated intestinal ß uid or in the pH change medium (pH 1.2). The helical structure and high viscosity of xanthan gum possibly prevent zinc ions from diffusing out of the ranitidine HCL sodium alginate-xanthan gum-zinc acetate matrix so that zinc ions react with sodium alginate to form zinc alginate Fig. 2: Structures of (A) amylopectin or ∝- amylase and (B)
precipitate with a cross-linking structure. The cross- July - August 2008 Indian Journal of Pharmaceutical Sciences 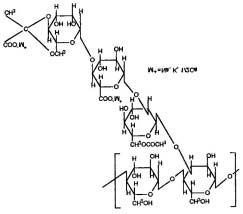 of β-D-mannose-β-D-glucuronicacid-α-D-mannose surface and the surface of fracture of tablets revealed attached with alternate glucose residues of the main that particles remained as coherent individual units chain. The terminal D-mannose residue may carry after compression process. Pellets showed close a pyruvate function, the distribution of which is compressibility degrees (49.9% for pellets comprising dependent on the bacterial strain and the fermentation diclofenac sodium and 48.5% for pellets comprising conditions. The non-terminal D-mannose unit in the ibuprofen). The release of the model drug from both side chain contains an acetyl function. The anionic type of tablets revealed different behaviours. Tablets character of this polymer is due to the presence of made of pellets comprising ibuprofen released the both glucuronicacid and pyruvic acid groups in the model drug in a bimodal fashion and the release side chain26 (Þ g. 4).
behaviour was characterised as Case II transport mechanism (release exponent of 0.93). On the other In one of the trials, xanthan gum showed a higher hand, the release behaviour of diclofenac sodium ability to retard the drug release than synthetic from tablets made of pellets was anomalous (release hydroxypropylmethylcellulose. Xanthan gum exponent of 0.70). For the latter case, drug diffusion and hydroxypropylmethylcellulose were used as and erosion were competing mechanisms of drug hydrophilic matrixing agents for preparing modiÞ ed release tablets of diltiazem HCl. The amount of hydroxypropylmethylcellulose and xanthan gum By utilizing retention properties of xanthan gum and exhibited signiÞ cant effect on drug release from the releasing properties of galactomannan, desire release tablets prepared by direct compression technique. profile was achieved in delivery of theophylline. It was concluded that by using a suitable blend of Hydrophilic galactomannan is obtained from the hydroxypropylmethylcellulose and xanthan gum seeds of the Brazilian tree Mimosa scabrella (Family desired modiÞ ed drug release could be achieved31.
Leguminosae). The matrices made alone with xanthan gum (X) showed higher drug retention for Compaction and compression properties of xanthan all concentrations, compared with galactomannan (G) gum pellets were evaluated and drug release from matrices that released the drug too fast. The matrices tablets made of pellets was characterized. Two types prepared by combination of both gums were able to of pellets were prepared by extrusion-spheronisation. produce near zero-order drug release. The XG (conc Formulations included xanthan gum, at 16% (w/w) 8%) tablets provided the required release rate (about and diclofenac sodium or ibuprofen, at 10% (w/w) 90% at the end of 8 h), with zero-order release among other excipients. Physical properties of pellets and tablets were analysed. Laser proÞ lometry analysis and scanning electron microscopy of the upper Tragacanth:
This gum is obtained from the branches of Astragalus
gummifer, Family Leguminosae20. Tragacanth when
used as the carrier in the formulation of 1- and 3-layer
matrices produced satisfactory release prolongation
either alone or in combination with other polymers34.
Volatile oils are generally mixtures of hydrocarbons and oxygenated compounds derived from these hydrocarbons. Many oils are terpenoid in origin; some of them are aromatic derivatives mixed with terpenes (e.g. cinnamon and clove). A few compounds (e.g. thymol and carvacrol) although aromatic in structure, are terpenoid in origin15 (Þ g. 5).
Fig. 4: Structure of xanthan gum.
Menthol is obtained by steam distillation of the Indian Journal of Pharmaceutical Sciences July - August 2008