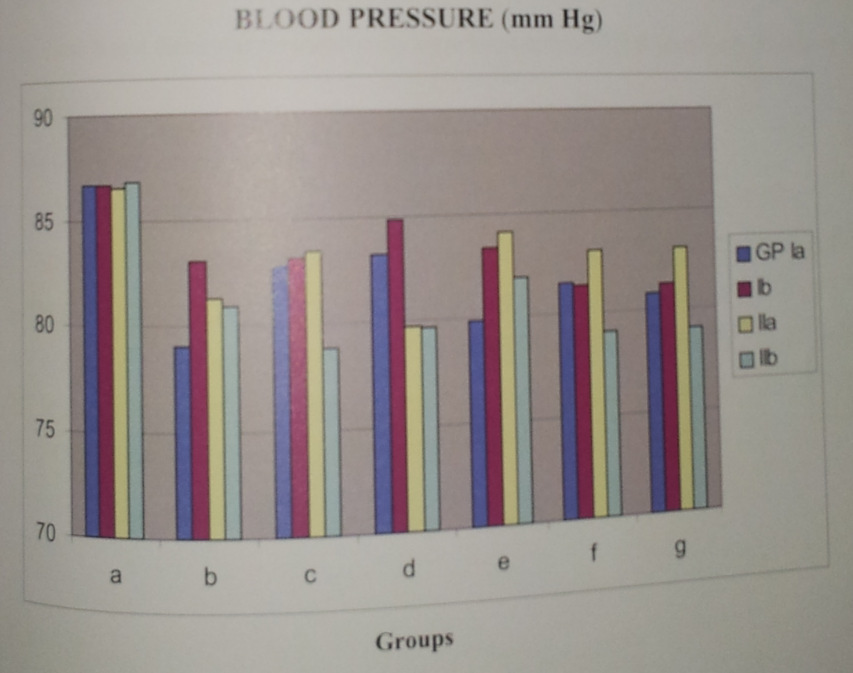 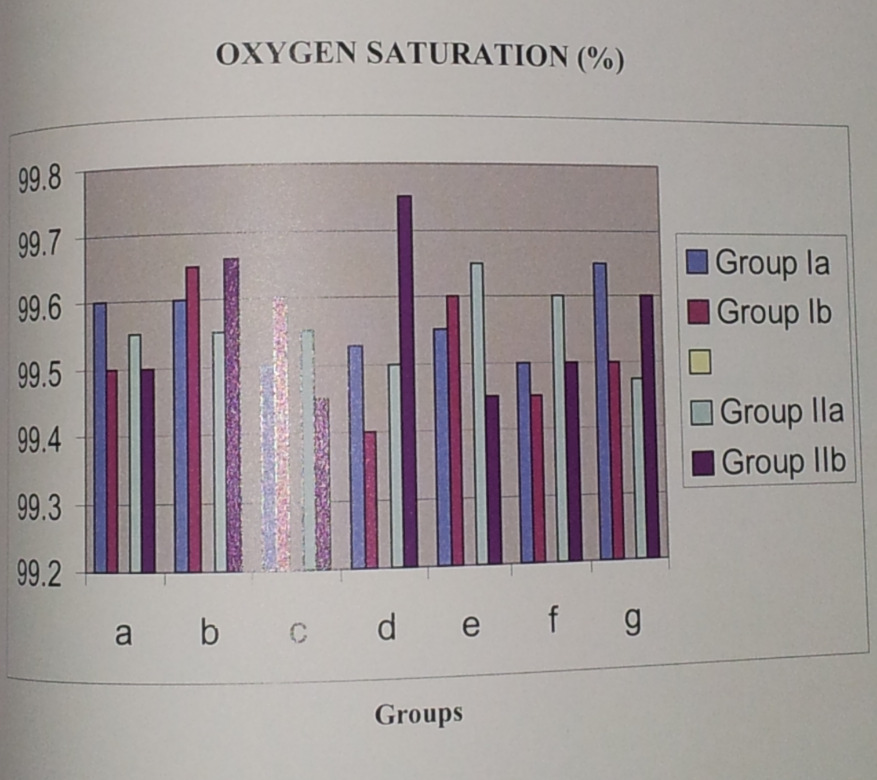 Asian Journal of Pharmacy and Medical Science Vol. 3 (1),April,2013 ISSN 2278-0017 Figure: 1 Blood Pressure record of different group with sub group:
There was no stastically significant difference in oxygen saturation between these two subgroups at any stage during the study p> 05. The preoperative oxygen saturation of all groups were comparable and these was no statistically significant difference between them, P value > 0.05. Although mostly patients in Propofol infusion, group had apnea which was corrected by mask ventilation. Figure: 2 Oxygen saturation (%) of different group
We recoded, time when patient was able to open eyes, follow commands and be oriented with respect to their name, place and date of birth. Times to sit, stand up, tolerate oral fluids and ambulate without assistance were recorded. Duration of time of stay in recovery room and actual time to discharge were recorded. Recovery was also assessed at 10 minutes interval using Modified Alderete Score. Early Recovery Phase I commence on discontinuation of the anesthetic agent, which allows the patient to awaken, recover protective airway reflexes and resume motor activity. Phase II recovery occurs before discharge, which makes able to tolerate orally, to void, to sit, to walk Modified Alderete Scoring System [MASS] is used to decide, when patients are ready for discharge from the post anesthesia care unit. Phase III recovery occurs after discharge and continues till patient resumes every day activities. 4 P a g e Available online on www.ajpms.com Original Research Article
Asian Journal of Pharmacy and Medical Science Vol. 3 (1),April,2013 ISSN 2278-0017 A Total Score of 10 according to MASS indicates that the patient is in optimal condition. DATA RELATED TO RECOVERY
Table: 3 Data related to recovery
Eye opening 5.65*1.17 Time to sit up 14.52*2.13 Time to stand 27.35*4.96 When a patient had no excessive pain or no vomiting and was able to walk unaided, he she can be discharged with a escorts.All patients required to be accompanied home with a responsible adult and who could stay with him for a minimum of 24 hours post discharge. Each patient was provided with a contact number where he remains with a health care provider in case of any difficulty. Side effects e.g.vomiting and pain were recorded. The Severity of emesis was assessed, based on a 4-point scale suggested by Belville et al to determine the emesis score in the following manner [5].O- No nausea or vomiting, 1- Nausea alone, 2- Vomiting once, 3- Vomiting > 3 times.In our study1 patient in-group Ib and 3 patients' in-group II b had nausea of which one has vomiting also. It was corrected with injection Ondansetron 4 mg intravenously.Pain was assessed with using a 10 cm Visual Analog pain Scale (VAS) where in scoring of pain from 0 to 10 was done with markings, corresponding to 0-no pain, 10 worst imaginable pain and with 1 to 3 implying mild pain 4 to 6 implying moderate pain and 7 to 10 implying severe pain.Postoperative pain was treated with injection Tramadol 50 mg intravenously. 5 P a g e Available online on www.ajpms.com Original Research Article 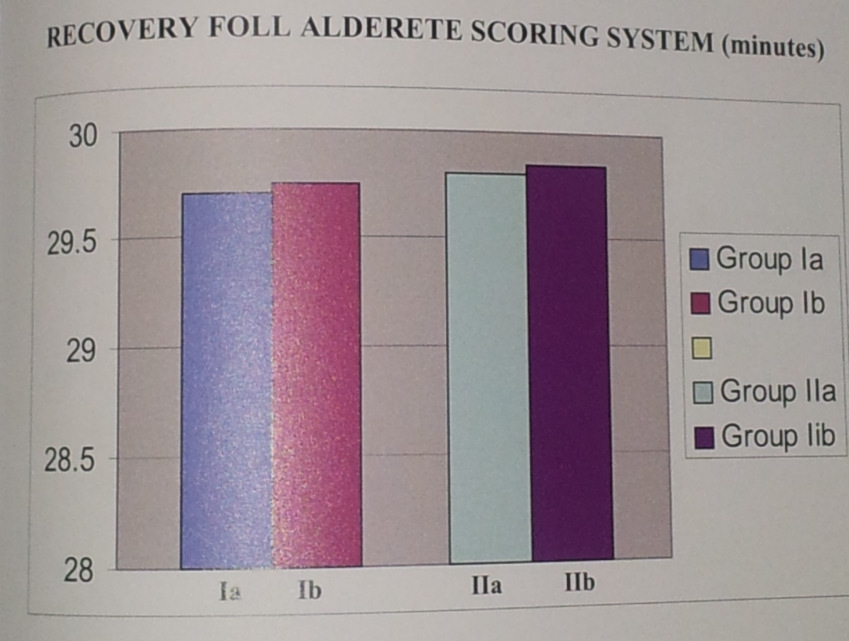 Asian Journal of Pharmacy and Medical Science Vol. 3 (1),April,2013 ISSN 2278-0017 Figure: 3 Recovery foll alderete scoring system
DISCUSSION
Paulin et al reported that GA with newer anesthetic drugs allowed an earlier discharge as compared with spinal or epidural anesthesia in newer practice [184 vs. 202 min for males] and [185 vs. 213 min} [6]. The introduction of rapid ultra short acting anesthetic agents like Propofol, Isoflurane and Sevoflurane and Fentanyl achieve a recovery profile that facilitates fact tracking after GA, Isoflurane is another anesthetic agent, which is popular for day care anesthesia, as it is also known to have a short recovery time [7]. It has been used for conscious sedation in outpatient dental surgery, when patients were street fit within 10 min after anesthesia [8]. But study by Kortill K. Ostman P in 1990 has shown that recovery was quicker following propofol as compared to Isoflurane anesthesia. [9]. Total intravenous anesthesia reduced the absolute incidence of postoperative nausea and vomiting up to 72 hr by 15% in patients and by 18% in outpatients. This effect was most pronounced in the early postoperative period. The cost of anesthesia was more than three times greater for Propofol TIVA but TIVA could be cost effective because the costs of treating PONV and increased recovery room stay after inhalational anesthesia offset the additional drug acquisition costs of Propofol TIVA [8]. So we used Propofol for induction in both the groups and for maintenance in one group, as it has favorable pharmacokinetic, Pharmachodynamic and antiemetic properties as we have discussed earlier for day care surgery. [10-13] As Propofol does not have any analgesic property, so we have used Propofol and Fentanyl combination in low doses for balanced anesthesia [14,18] For intra-operative pain relief, we use intravenous aqueous preparation of Voveran and Fentanyl in all patients. The VAS scores for pain, sleepiness anxiety and co-ordination were not affected by our anesthetic techniques.No difference in the analgesic requirement was found in the postoperative period. Canosen described, effectiveness of Ondansetron in the prevention of postoperative vomiting is not affected by the patient's past history of PONV. [15] 6 P a g e Available online on www.ajpms.com Original Research Article
Asian Journal of Pharmacy and Medical Science Vol. 3 (1),April,2013 ISSN 2278-0017 Sadhasivam et al reported that prophylactic use of Ondansetron 75 mcg / kg reduces the incidence of PONV from 80% to 30% and improves true outcomes after strabismus repair in children [16]. In our study, no patient felt nausea & vomiting. In subgroups which received two antiemetic drugs. But in group Ib, only I patient and 3 patients in group II b had nausea which was treated with intravenous Ondansetron 4mg, where we used Isoflurane for maintenance, no antiemetic drug was used in this subgroup. It has shown that after general anesthesia PONV is common, which is manifested when we did not use any antiemetic drug. We used modified ALDERETE scoring system to asses the recovery from the PACU to the home, as in our hospital we have only one O.T recovery room so we kept patient there till we get score of 9 according to this system. This criteria do little to test higher level of function such as the ability to use one's hands, do drive car or to remain alert for long enough to drive So we had to keep patient in our recovery room till they become fully awake, obeying commands, haemodynamically stable without pain, nausea and vomiting [phase I and phase II recovery]. This was noted as actual discharge time or time to be ‘street fit'One person should accompany the patient for24 hours,even in the home. Phase III recovery occurs after discharge and continues until the patient has resumed usual everyday activities [17]. The 24 hrs follow up telephone interviews revealed no difference in the incidence of nausea, vomiting, coughing and dizziness in all the groups. 1. Day care surgery is an upcoming branch of anesthesia. 2. PONV is a common problem causing delay in discharge. 3. Short and nonemetogenic procedures can be done without antiemetic drugs especially if we are using technique, which we have used in Group I. REFERENCE
1. Janet M. Van Vlyment, while P, F- Outpatient Anesthesia In: Anesthesia 5th edition, Miller RD (ed) chapt: 65, pp 2213-2240 2. Morton HJV, Wylie WD (1951) Anesthesia deaths due to regurgitation or vomiting Anesthesia 6, 190-205 3. Smith GFR (1934) Postoperative vomiting Br J. Anesth. 11,132-39 4. S K, ambulatory anesthesia and surgery in America. A historical background and recent innovation J Peri anesthesia 1999, 14(5) 270-4 5. Bellvielle J W Brors IDJ, Holland W S. (1959) A method for the clinical evaluation of antiemetic agents, Anesthesiology 20, 735-60. 6. D Janet Pavlin factors affecting discharge time in adult out patient Anesth. Analg. 1998, 87: 816-26. 7. Korttila K, Valanne J. Recovery after outpatient Isoflurane and Enflurane anesthesia. Anesth Analg 1985:64:239 8. Randomized controlled Trial of Total Intravenous Anesthesia with Propofol versus Inhalation Anesthesia with Isoflurane- Nitrous oxide- Visser hassink Anesthesiology 2001 V 95 No3, Sep 2001 616-626 9. Kortlilak, Ostman P. Faure et al Randomized comparison of recovery after Propofol Nitrous oxide anesthesia in patients. Undergoing ambulatory surgery. Acta Anaesthsiol Scand 1990:34:400-903 7 P a g e Available online on www.ajpms.com Original Research Article
Asian Journal of Pharmacy and Medical Science Vol. 3 (1),April,2013 ISSN 2278-0017 10. Rolly G, Versichelen L. Comparison of Propofol and Thiopentone for induction of anesthesia in premedicated patient. Anesthesia 1985:40:945-48 11. Price ML, Comparison of Total intravenous anesthetic technique using Propofol of infusion with an inhalation technique using Enflurane for daycare surgery. 12. Mc Collum JSC, Milligan K. R, Dundee JW, The Antiemetic action of Propofol Anesthesia 1988:43:239-240 13. Van A, Doze BS, Shafer A, White P, Propofol- Nitrous oxide versus Thiopentone- Isoflurane Nitrous oxide for general anesthesia Anesthesiology 1988:69:63-71 14. A comparison b/t TIVA using Propofol Alfentanil mixture with an inhalational technique in laproscopic gynecologic sterilization E J Anesthesilolgy 1996: 13, 33-37 15. Canosa-ProphylacticOndansetron for postoperative emesis Acta Anaesthesiology Scandanavia1999,43 16. Sadasivam S et al- Safety and efficacy of prophylactic Ondansetron in patients undergoing redical mastectomy Anesth Analg 1999, 89. 1340-6 17. Paul F white and Dajun Song- New Criteria for fast tracking after outpatient Anesthesia- A Comparison with the modified Alderete Scoring System.Miller,s 6th edition 1894-1899 18. Comparison of 2 drug combinations in TIVA:Propofol-Ketamine and Propofol-Fentanyl .Saudi J Anaes 2010May-Aug 4(2):72-74 8 P a g e Available online on www.ajpms.com Original Research Article

Security Mechanisms and Policy for Mandatory Access Control in Glenn Daniel Wurster A thesis submitted to the Faculty of Graduate Studies and Research in partial fulfilment of the requirements for the degree of DOCTOR OF PHILOSOPHY Carleton University Ottawa, Ontario, Canada ©2010, Glenn Daniel Wurster Computer security measures, policies and mechanisms generally fail if they arenot understood and accepted by all parties involved. To be understood, manysecurity mechanisms currently proposed require security expertise by multipleparties, including application developers and end-users. Unfortunately, bothgroups often lack such knowledge, typically using computers for tasks in whichsecurity is viewed at best as a tertiary goal. The challenge, therefore, is todevelop security measures understood and accepted by non-experts.