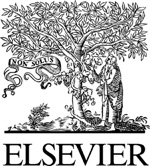 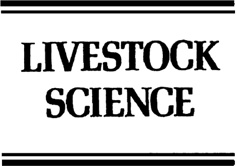 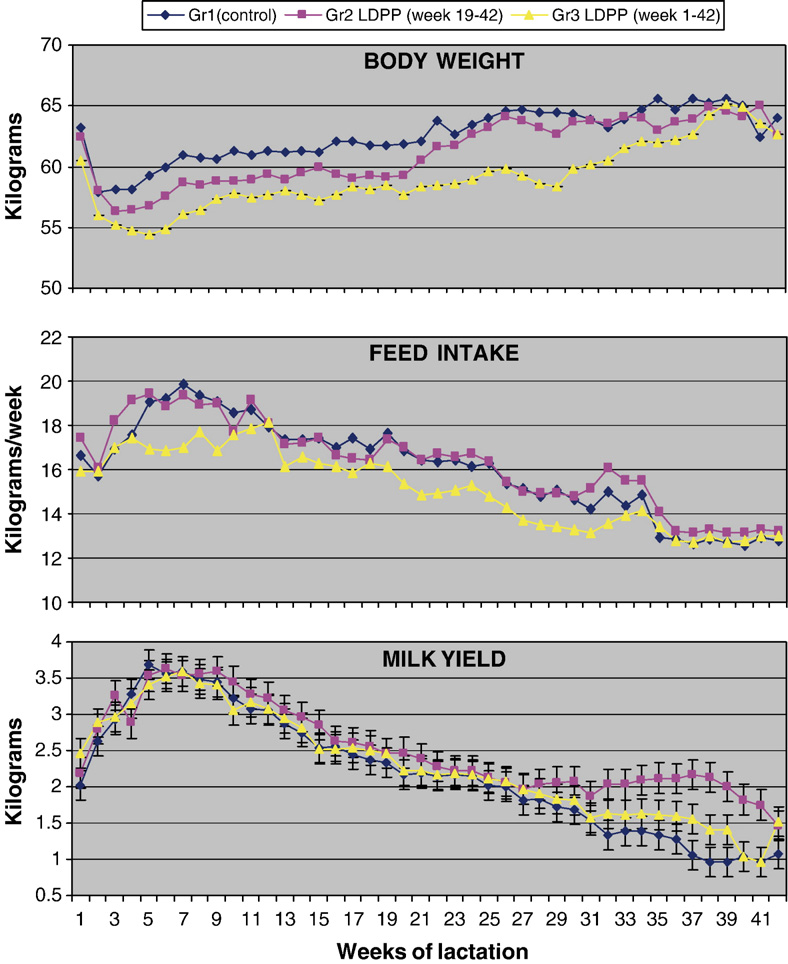 R. Garcia-Hernandez et al. / Livestock Science 110 (2007) 214–220 Fig. 1. Pooled standard error of the least square means on weekly mean body weights, feed intake, and daily mean milk yields per week = 3.97, 0.64,and 0.64, respectively in the three groups of female goats subjected either to natural photoperiod (Gr1), LDPP; from June 22 to December 5 (Gr2) andfrom February 16 through December 5 (Gr3).
effect on lactation in ewes (16L:8D) ( (weeks 29 to 42; ) over Gr1 and Gr3 suggests that ). In our study, we found a significant effect the 6 months of LDPP treatment may have a positive (P b 0.001) of LDPP (20L:4D) on milk yield for both affect on persistence of lactation.
Gr2 and Gr3 over natural photoperiod (Gr1), with an It is generally thought that milk composition in cows average increase of milk yield of 0.324 l (+ 15%) per is not affected by photoperiod ).
goat per day for the Gr2, and 0.112 l (+ 5.1%) per goat However, reported an average per day for Gr3 over milk yield for Gr1 (The increase in protein production of 0.02 kg/h of day light.
increase of milk production in Gr2 for the last third In contrast to this finding, reported that Table 2Body weight, feed intake, milk yield, milk fat, milk protein and somatic cell count for the three groups expressed as least square means ± standarderror for the entire lactation trial period Somatic cell count (kg/head/week ± S.E.) 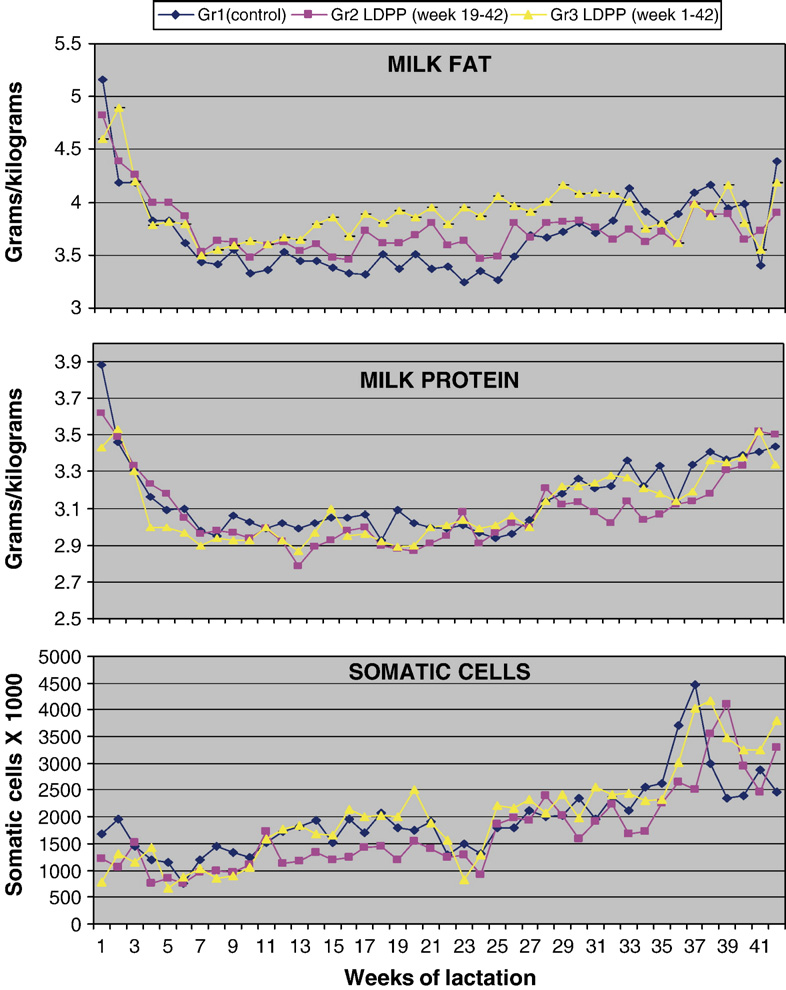 R. Garcia-Hernandez et al. / Livestock Science 110 (2007) 214–220 Fig. 2. Pooled standard error of the least square mean on milk fat, milk protein and somatic cells = 0.15, 0.08, and 334.53 in the three groups of femalegoats subjected either to natural photoperiod (Gr1), or LDPP; from June 22 to December 5 (Gr2) and from February 16 through December 5 (Gr3).
there were no changes in milk protein percent, or There was a significant (P b 0.0001) effect of somatic cells count, and a very slight decrease in milk treatment and time on somatic cells counts fat percent in response to LDPP. The main factor These differences may be attributed to differences in affecting milk fat and milk protein in cattle was reported milk volumes between the treatment groups. Weekly to be temperature LSM values for SCC/ml of milk for the 42 week trial ) while in sheep, the level of nutrition were highest for Gr3 (2.026 × 106/ml) and Gr1 was considered to be the main factor ( (1.958 × 106/ml). Group 2 showed the lowest SCC ). In our trial, milk fat varied with the concentration (1.705 × 106/ml, and The treatment (P b 0.0001) and time of the experiment decrease in the overall lactational LSM value for SCC for (Over all lactation, milk fat was higher in Gr2 was unexpected and may be the result of increased Gr3 (+ 5.2%, + 0.19 g/100 ml milk), followed by Gr2 lactation milk yield for Gr2, especially in the last third of (+ 1.7%, + 0.06 g/100 ml milk) and the control group lactation which is normally when diary goats have under natural photoperiod In contrast to milk decreased milk production and increasing SCC concen- fat, milk protein concentration showed a slight decrease trations. This finding may hold unexpected benefits for for Gr2 (−2.26%, −0.07 g/100 ml of milk) and Gr3 dairy goat producers who chronically have problems (−1.45%, −0.05 g/100 ml milk) when compared to Gr 1 maintaining levels of SCC below 1 million, which is the official level distinguishing grade A vs. grade B milk.

Consultant Gynaecologist and Obstetrician Lead Urogynaecologist, Northampton General Hospital What is Painful Bladder (PBS) or Interstitial Cystitis (IC)? Interstitial Cystitis (IC) is a chronic inflammation of the bladder wall, which can also be diagnosed as Painful Bladder Syndrome (PBS) or Bladder Pain Syndrome (BPS). It is a disorder with symptoms of