Huerta, Schade, Granell (Eds): Connecting a Digital Europe through Location and Place. Proceedings of the AGILE'2014 International Conference on Geographic Information Science, Castellón, June, 3-6, 2014. ISBN: 978-90-816960-4-3 Analysing spatiotemporal patterns of antibiotics prescriptions Luise Hutka and Lars Bernard Technische Universität Dresden Professorship of Geoinformation Systems Dresden, Germany Abstract
The emergence of antibiotic resistances due to antibiotic residues in urban sewage systems is becoming an increasingly important issue. This paper presents a model for the spatiotemporal analysis of antibiotic inputs to derive spatiotemporal distribution patterns which are the basis for later predictions of future antibiotic inputs into the sewer system. To identify spatiotemporal distribution patterns of antibiotic prescriptions data statistical and GIS methods like time series and spatial cluster analysis are used. In order to find possible interrelationships the prescription data is combined with other influencing parameters (e.g. cases of respiratory infections) and tested for statistical correlations. Results show a pronounced seasonal course for three antibiotics of the macrolide group which also show high correlations with cases of respiratory infections in the study area. Further, results show that weekly data of respiratory infections by Google Flu Trends may be used as predictor variable to derive forecasts of future antibiotic inputs into the sewer system. Keywords: antibiotic prescriptions, spatiotemporal pattern recognition, drug residues, correlation analysis statistical tools and GIS. The paper starts in describing the study design to analyse spatiotemporal patterns of antibiotics Drug residues in sewage are an important issue in the context input into the sewage system using existing medical of the objectives of wastewater treatment [9, 12, 13]. In prescription data and further geodata. The remainder focuses general, it is assumed that an increased input of antibiotics on discussing the current results and on detecting appropriate into the environment promotes the formation of antibiotic- input variables – e.g. from crowd-sourced data – for a model resistant bacteria. If a pathogen is resistant to a particular to predict antibiotic release into the sewer system. antibiotic, taking this antibiotic in case of an infection with the pathogen is ineffective. In the end, the increasing antibiotic resistances together with the decreasing development of new Spatiotemporal Analysis of Antibiotic
antibiotics in recent years may lead to more and more Medications
antibiotics becoming ineffective, with the result that infectious diseases could spread again [19]. Thus, there are numerous Various studies demonstrate GIS to be a powerful tool for studies on the efficiency of various procedures regarding the analysing spatial and temporal distribution patterns of drug- specific behaviour of antibiotics and resultant antibiotic related health data. Cheng et al. [2] used local spatial resistance [1, 16, 17]. association statistics to examine the geographic variation of The project ANTI-Resist1 [5] researches the release of cardiovascular drug-prescribing patterns in Taiwan. Modarai antibiotics and potentially related appearance of antibiotic et al. [15] performed a local Moran's I analysis on annual resistances in the urban sewage system of the city of Dresden. opioid prescription sales aggregated by 3-digit zip codes and As a long term objective the project is meant to support the correlated this data with official data on opioid overdoses. As design of strategies to reduce the formation of antibiotic in the previous studies, also in the present work local resistances in urban wastewater. The project focuses on the Moran's I analysis is performed on prescription data, but in development of corresponding monitoring and warning applying a higher temporal and spatial resolution as the used systems. Within the project various aspects related to antibiotic prescription data are available at a weekly/monthly antibiotic fluxes and transports in urban wastewater systems resolution for 8 years and on an urban district level. A related are considered. First, the antibiotic prescriptions of medicines work on antibiotic prescriptions was published by Kern et al. are investigated. Second, models are being developed to [11] who studied the regional variation in outpatient antibiotic describe their release and transport within the sewage system use within Germany. In contrast to the work presented here, and third, the related emergence of antibiotic resistances Kern et al. analysed prescription data for only one year and on within the sewer and the water treatment facilities are studied the large-scale federal state level, further they did not apply using different measurement and observation methods. GIS-based spatial analysis. This paper describes the approach of spatiotemporal The ANTI-Resist project follows a twofold approach in analysis and modelling of antibiotic prescriptions using analysing spatiotemporal patterns of antibiotics emergence and related processes in urban wastewater: (1) Sewer measuring campaigns and related laboratory studies are 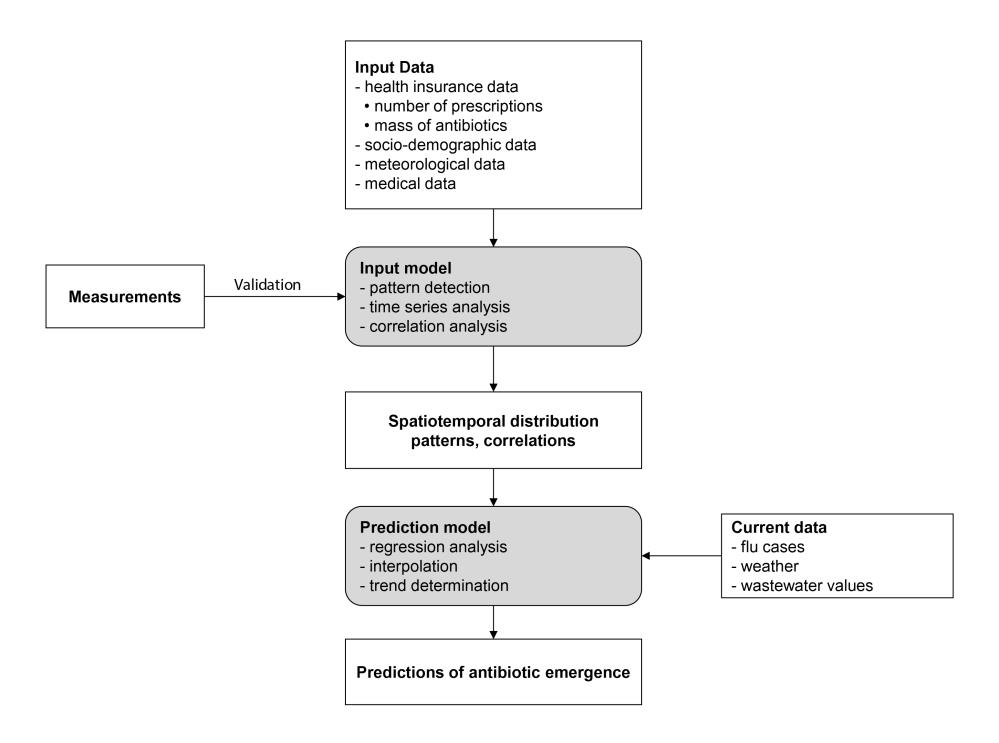 AGILE 2014 – Castellón, June 3-6, 2014 Figure 1: Schema of input model and prediction model conducted to better understand the actual antibiotic fluxes and Input Data
the genesis of antibiotic resistance within the sewer system and (2) data driven (statistical) models are getting designed to Basis for the input model are data about the ambulant serve as best estimated guesses on where antibiotics are being antibiotic prescriptions that have been provided by one of the released and how they are transported through the sewage German compulsory health insurances (AOK PLUS). These system. Figure 1 sketches the conceptual frame for these data are available in a weekly and monthly temporal models and consists of two components: resolution for the period from 2005 to 2012. The data are An input model has been designed to analyse provided for the 64 urban districts of the city of Dresden and historical prescription data, socio-economic data aggregated into three age groups: 0 to 14 years, 15 to 64 and environmental data to identify typical years, 65 and more years. The following antibiotic substances of various active ingredient groups are examined: amoxicillin, medications, to estimate related antibiotic fluxes azithromycin, cefuroxime, ciprofloxacin, clarithromycin, into to the sewer system and to evaluate these levofloxacin-ofloxacin, estimates against different measurements within the The input model then serves as the basis for a Several issues arose when analysing the prescription data prediction model to estimate the future release and from the health insurance. First, the supplied data comprise fluxes of antibiotics into the sewer system. The only the patients of this single insurance company, which prediction model shall serve to alert the urban waste represent about 41% of the population of Dresden. So the water treatment and environmental agencies about prescription data is extrapolated to the total population of the potential occurrence of antibiotic peaks in the Dresden. Second, due to medical data protection issues sewage and the released waste water. As the prescription amounts between 1 and 3 are anonymised. In the treatment of antibiotics is not part of the operational calculations this problem is handled by setting all anonymised waste water treatment these alerts could also trigger values to the minimum amount of 1. Third, the data can only related specific measurements in the sewage plant. be delivered with a delay of at least one year. Consequently The main objective of the input model is to use spatial up-to-date official prescription data are not available for the statistical tools to investigate the variation of antibiotic inputs studies. This fact is seriously hampering the prediction of in time and within the urban districts of Dresden as well as future antibiotics release into the urban sewer system. To correlate it with other influencing factors that might have an overcome the latter problem it was necessary to identify data impact at the variation of the antibiotic prescriptions. This of other influencing factors that are related to antibiotic paper focuses the design and results of the input model and prescriptions and would eventually serve as a proxy for a will discuss some initial design ideas for the prediction model. prediction of antibiotic medication. The identified major influence factors are presented in the following.

AGILE 2014 – Castellón, June 3-6, 2014 Several studies have shown that there is a correlation time series into three components: seasonal variation, long- between respiratory infections and antibiotic prescriptions. On term trend and random noise (remainder component) [3]. the one hand for the majority of treated cases of respiratory Thus, the temporal variation of the prescriptions of the diseases antibiotics are prescribed. This is evident especially individual antibiotic substances in the overall city as well as in during the annual cold waves and winter flu season, which the individual urban districts could be examined as to whether regularly are accompanied by a significant increase of there are certain long-term trends and periodic seasonal antibiotic prescriptions [4, 8, 20]. On the other hand often a patterns. An example of the result of such a time series secondary bacterial infection follows a flu infection, as the analysis is shown in Figure 2. organism is already weakened due to the fight against the viruses. Therefore bacteria can more easily lead to further Figure 2: An example for the resulting components of a time infections that are then often treated by the use of antibiotics – series analysis in R using the STL function (sum of all antibiotic substances, 2008 – 2010) prophylactically, without bacterial caused symptoms being already present [10, 18]. For these reasons contemporary available representative data about current cases of respiratory diseases have been considered as potential proxies for the input model. Such data is provided by the flu trends portal from Google2. Ginsberg et al. [6] have analysed billions of Google search requests and determined that there is a high correlation between the frequency of particular search terms and the actual number of patients with influenza-like symptoms at a time. For the validation of their results they used historical data of traditional influenza surveillance systems. For Germany Google Flu Trends provides the weekly cases of respiratory infections per 100,000 inhabitants at a Federal State level from 2003 up to the current week [7]. Other influencing factors that have been identified and incorporated into the input model are meteorological (temperature, precipitation, etc.) and sociodemographic (population, employment structure) parameters. For the meteorological parameters the Regional Climate Information System for Saxony, Saxony-Anhalt and Thuringia (ReKIS)3 is used. This database contains – for the city of Dresden – data for 3 climate stations and 3 precipitation stations in a daily resolution for the years 1961 to 2013. At the most comprehensive station about 16 parameters are determined. For the sociodemographic parameters data from the Dresden statistics office is used4. It provides yearly data at an urban district level about the population, discriminated by sex and nine age groups and data on employees and unemployed persons as relative proportions of the relevant age group. The health insurance company AOK PLUS provided data on the age structure of their patients in 5 age groups at the urban ArcGIS (ESRI ArcGIS 10.2) with its geostatistical methods district level for the year 2011. Most of the input data for pattern recognition has been used to analyse the spatial described here can be explored via the ANTI-Resist distribution of the antibiotics prescriptions within the Dresden urban districts. ArcGIS offers several functions for the analysis of local spatial patterns: Hot Spot Analysis (Getis- Ord Gi*)6 and Cluster and Outlier Analysis (Anselin Local Morans I)7. Figure 3 and 4 show examples of the results of the respective cluster method. The Hot Spot Analysis results in In a first step the antibiotic prescriptions have been modelled statistically significant clusters of similarly high values regarding their temporal and spatial distribution using various (Figure 3 - red) or low values (Figure 3 - blue) for different statistical and GIS-based methods. confidence levels. In contrast, the result of the Cluster and The temporal analysis has been carried out by time series Outlier Analysis shows not only statistically significant analysis in R using the STL function, which decomposes a clusters of high values (Figure 4 - red) or low values 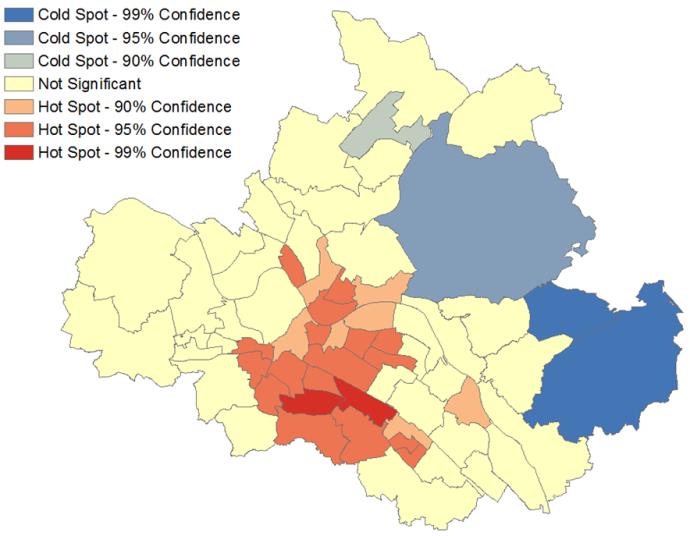 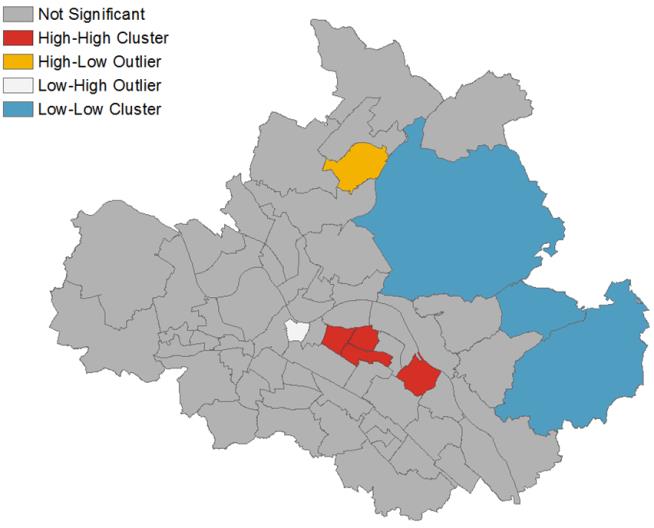