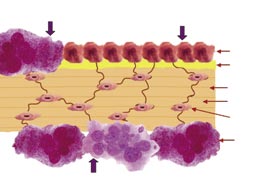 GROWTH, GENETICS & HORMONES decreases as wel . Fracture healing does not appear Increase osteoclast apoptosis?
Decrease osteoblast apoptosis
to be impaired in patients with OI when compared to untreated OI patients.37,38 There is a striking disappearance of bone pain and decreased fracture incidence noted with intravenous treatment. This may contribute to greater mobility,39,40 an essential factor for the development of the skeletal system.41 A lower fracture incidence, despite higher risk of injury due to increased mobility, suggests a direct effect of the therapy. These effects contribute to an improvement in the quality of life of patients with OI who are receiving treatment.
A side effect of high doses of pamidronate (9 mg/kg/yr) is retention of calciﬁed cartilage within Interfere with osteoclast function?
secondary spongiosa in children with OI.30 Higher Figure 1. Possible mechanisms of action of bisphosphonates on bone.
doses have caused osteopetrosis in a patient with no diagnosis.42 Retention of calciﬁed cartilage within among the bisphosphonates that may inﬂuence their secondary spongiosa is a hal mark of osteopetrosis, mechanisms for binding and inhibiting bone crystal this suggests a dose-related effect of pamidronate. growth and dissolution. This may explain differences Studies using oral bisphosphonates for the treatment of in potency among different bisphosphonates, such as OI (olpadronate,43 alendronate) showed no differences the apparently more prolonged duration of action of between the drugs and placebo on functional outcome, alendronate and zoledronic acid, compared with the more anthropometrics, fracture incidence, or vertebral height, readily reversible effects of risedronate.31 although it has been suggested that oral alendronate may improve quality of life in this group of patients.44 Different treatment protocols recommend the use of different bisphosphonates (ie, pamidronate, risedronate, EFFECTS OF BISPHOSPHONATE TREATMENT ON
alendronate, olpadronate, neridronate), and at different GROWTH IN CHILDREN WITH OI
dose regimens for the pediatric population. For example, The effect of treatment with bisphosphonates on pamidronate doses range from 4.5 mg/kg/yr32,33 (Tables 1 longitudinal bone growth in children has been a concern and 2) to 9 mg/kg/yr.34,35 Children treated with high-dose among clinicians.45 Bone resorption is an essential part pamidronate experience dramatic increase in BMD, with of the normal endochondral ossification process,46 changes of as high as 200% per year.35,36 Other positive and of the bone modeling and remodeling process. effects observed include increase of the cortical width Despite the fact that the mechanism of long bone of the metacarpals, and increased vertebral height in growth relies upon clonal expansion and subsequent previously fractured vertebrae. The incidence of fractures hypertrophy of chondrocytes, endochondral bone growth requires resorption of the septa of calciﬁed cartilage at the chondro-osseous junction of the growth plate Table 1. Protocol for administration of low-dose IV
by chondroclasts, permitting vascular invasion of the hypertrophic cell lacunae.47 Drugs interfering with this Age group
mechanism could potentially cause impairment of the 0.37 mg/kg/day for 2 days bone elongation process. Bisphosphonates interfere with osteoclast function29 or survival,48 and could, therefore, 0.56 mg/kg/day for 2 days have a deleterious effect on bone growth. This undesired 0.75 mg/kg/day for 2 days effect has actually been shown in animal studies.49 High doses of alendronate (>2.5 mg/kg/wk) inhibited long bone length in the OIM mice (a model of OI) through alteration Table 2. Suggested dilution and infusion rates for IV
of the growth plate and possibly reduced resorption at the chondro-osseous junction.50 Furthermore, lower mg of pamidronate
mL of normal saline
doses of alendronate do not appear to have a detrimental effect on growth in oim/oim mice,51 suggesting another dose-related effect of bisphosphonates. On the other hand, bisphosphonates do not appear to be detrimental for growth in human subjects at the doses currently used (Figure 2).24,52-55 Each time a patient receives a pamidronate infusion, a new sclerotic line appears in the GGH Vol. 23, No. 2 June 2007 19 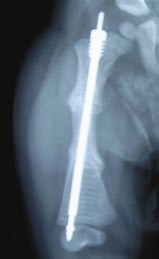 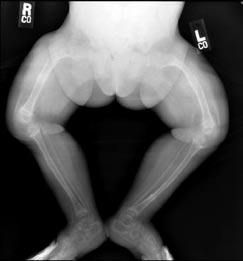 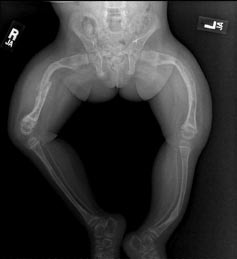 GROWTH, GENETICS & HORMONES Figure 2. Lower limbs x-ray of a child with severe OI before (a) and after 12 months (b) of treatment with low-dose pamidronate
(4.5 mg/kg/yr). Treatment was started at 18 months of age. Note longitudinal growth. Fractures do occur under treatment as evident in the
panel on the right, but at much lower rate than before treatment.
metaphysis of long bones. The distance between these in those with more severe forms of the condition when lines reﬂects longitudinal bone growth (Figure 3).
receiving therapy with alendronate or pamidronate.57 Pamidronate in high doses (9 mg/kg/yr) does not appear One study showed that patients treated with high doses of to negatively affect growth. Height z-score actually pamidronate (9 mg/kg/yr) had similar growth plate width but increased in a group of patients wider metaphyses when compared with with OI who had started treatment untreated OI patients who were matched before 3 years of age.35 After one for OI type and age, despite the lack of year of pamidronate therapy, height detrimental effects of bisphosphonates z-scores increased signiﬁcantly in a on longitudinal growth,58 suggesting group of children with severe OI and an effect of the high dose on bone did not change in children with mild remodeling. A different study showed and moderate OI.24 After 4 years of that metaphyseal modeling in the therapy with the same dose regimen distal femur is constant in children on of pamidronate, mean height z-scores bisphosphonates—with slight variation increased signiﬁcantly in children with between sexes—resulting in a similar moderate OI, whereas non-signiﬁcant shape of the distal femur throughout trends to increase were seen in childhood when looking at the modeling patients with mild and severe OI.24 process.59 Noteworthy, the observed Low doses of pamidronate appear positive effect of pamidronate on bone to have a similar effect (data not growth does not appear to be secondary published) (Figure 3).
to acceleration of bone age.24 Low doses of pamidronate elicited Infants with OI appear to grow better no short-term evidence of growth when treatment with neridronate is impairment in children with a variety of started soon after birth, rather than at pathologies leading to osteoporosis, 6 months of age.60 Older children with including OI. A median annualized Figure 3. Distal femur of a pediatric OI receiving neridronate grew faster
change in height SDS of 0 (range, patient with OI receiving treatment with than controls in one study.61 At the
–0.4 to 0.5) was noted in that group.56 IV pamidronate. Note the sclerotic lines, microscopic level, the size of iliac crest
each representing an infusion. The distance As expected, growth changes are between lines reflects longitudinal bone bone biopsies is not signiﬁcantly different greater in children with milder OI than growth in a 2-month period.
before or after treatment in children 20 GGH Vol. 23, No. 2 June 2007 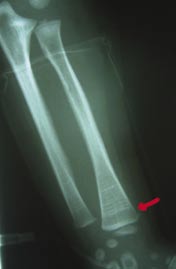 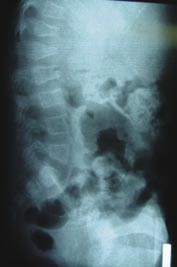 GROWTH, GENETICS & HORMONES with OI. Changes are seen in cortical in patients with moderate OI, and width, which increased by about 90%. 9 cm in patients with severe OI Cancel ous bone volume increases can be expected at 15 years of by about 45% with treatment. This age. These results suggest that change is due to higher trabecular acceleration of growth is not just a number, with no change in trabecular transitory effect, but rather a lasting thickness.30 Importantly, there is no outcome on height in children with evidence for a mineralization defect OI who are receiving pamidronate in children with OI treated with high intravenously. As mentioned doses of pamidronate.30 Growth in above, it is not entirely clear how children continues after treatment pamidronate treatment might with pamidronate is stopped, and the improve growth. Part of the effects newly-formed bone wil be unprotected of bisphosphonates on growth in and prone to fractures (Figure 4).
children with moderate and severe OI could be due to prevention of long LONG-TERM EFFECTS OF
bone deformity and regeneration of BISPHOSPHONATES ON HEIGHT
vertebral fractures (Figure 5),35,62 In one study, mean height z-scores and to prevention of microfractures of subjects with all OI degrees of affecting growth cartilage.
severity tended to increase after 4 years of pamidronate therapy when EFFECTS OF GROWTH
compared with baseline. However, HORMONE IN CHILDREN WITH OI
the change in height z-scores was Growth hormone regulates post- signiﬁcant only for the group with Figure 4. Long bones continue growing after natal bone growth; IGF-I mediates
moderate OI, but not for mild or treatment with bisphosphonates is stopped the growth-promoting action of GH,
(arrow), causing susceptibility to fractures.
severe OI.24 It is of note that these although it has been shown that comparisons were done against normal growth charts GH may have independent, direct effects on growth.63 designed for healthy children. To more accurately Also, IGF-I has mitogenic effects in dividing cells and assess the growth rate of children with OI undergoing is closely associated with growth, although plasma treatment, the same group compared their growth with levels do not correlate with growth rates. It is known to that of a group of children with OI who were not receiving treatment with bisphosphonates. In that study, each height measurement of patients was expressed as a percentage of the mean value expected for untreated OI patients. During 4 years of pamidronate therapy, height significantly increased above the values expected for untreated patients.24 EFFECT OF PAMIDRONATE
ON FINAL HEIGHT
There is very little information
about ﬁnal height in children with
OI treated with bisphosphonates.
There is the description of only
8 patients who attained ﬁnal height
while receiving treatment with
pamidronate.24 In this study, ﬁnal
height, expressed as a percentage
of the expected height in untreated
patients, was signiﬁcantly higher than baseline height. This study Figure 5. Lumbar spine x-ray of a child with severe OI before (a) and after 12 months (b) of
suggests that an average gain of treatment with low-dose pamidronate (4.5 mg/kg/yr). Treatment was started at 18 months of 7 cm in patients with mild OI, 12 cm age. Note increased vertebral height with treatment.
GGH Vol. 23, No. 2 June 2007 21 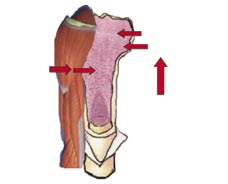